General Motors launched Chevrolet Beat in India four years back in 2010. The Beat was always a successful model in our country, especially after its action in 'Transformers' as a petite peppy 'Autobot' but due to the increasing number of alternatives flooded in market, it had started to lose its sheen. So, to revive that buzz, the company launched Beat with a facelift at the 2014 Auto Expo, Delhi.

It is the only model in Chevrolet's Indian lineup that received any changes and most probably, this is the last facelift of the Beat as the next generation Chevrolet model is set for a global debut in 2015 and launch in 2016. If you look at the other models on display, they are just heavily accessorized. The launch came with perfect timing as Maruti Suzuki has just recently launched the new Celerio in this segment.
Will the new Beat be able to lead the segment? I & my brother spent three days with the diesel version, top-spec LT(O) variant of this hatch just to answer this question. Continue reading to know what I explored.

The Beat was always a funky & sporty looking car most loved by young buyers. This head-turner has the same sleek body graphics & robust outer look but the body is curvier now. The new facelift comes with some minor design changes.

This time, there is a new dual port grille with fine chrome detailing which merges with the curvier headlights perfectly. As on Sail Twins, there is a bigger bow in the centre. To add to the dashing front look, there are black highlights inside the long swept back headlamps. There are satin silver finish roof rails on top and the B pillar styling strip designed makes the Beta look sportier. Also, the big sized tubeless tyres and 15-inch BM alloy wheels add to this aggressive look.

At the rear, tail lamps are given a new jewel effect and the new dual tone rear bumper is basically a plastic cladding. The bumper is also redesigned with new fog lights having silver accents. There is a new spoiler integrated with LED inserts.
In short, the Beat Facelift features new mirrors, bumpers, rear spoiler and head & tail lights. Yes, these are very minor changes but bring out such drastic difference in appeal that you will be struck by the difference between the original and the facelift model. 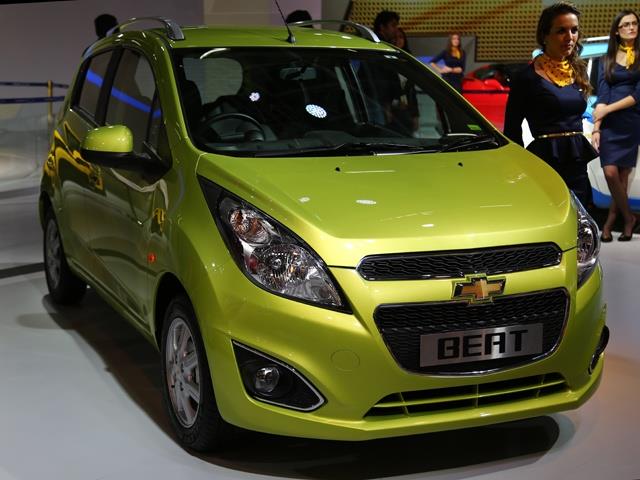 Stepping inside, the cabin feels nice, cozy and familiar. My brother always falls sleepy inside it. Anyways, let's stick to the cabin description. There are more curves and less of lines all around. The dashboard is of very fine quality and the blue backlit on the toggles & controls on it look appealing. New steering mounted controls have been added for controlling the audio system. Air conditioning and the new integrated audio system with AUX IN/USB/CD and four speakers & antenna are as good as before but not good enough if you compare with the competitors. Driver's seat is very comfortable and gives good view of road. It measures 3640 x 1595 x 1520mm and is big enough to accommodate 5 people.

Every afternoon, the compressor used to turn off for a while and the cabin lost cooling but I think this may due to the extremely hot summers in Delhi.

Both these engines are coupled with a 5-speed manual transmission gearbox that ensures smooth gear shifting. The gearbox is really fuel efficient and economical to run as it gives excellent mileage.

As the power and torque figures of the Beat are very good, this results in superb acceleration & engine performance. This is the reason why it does not vibrate even after crossing 100kmph. I have driven the diesel version only and its acceleration is decent but I have heard from a friend that the acceleration of the petrol version is better. I was able to cross 100km in 15.5 seconds only and even when I reached the top speed of 145 kmph, the car was very stable. The diesel version gave me an outstanding mileage of 25.44 km/litre on highways and 22-23kmpl in city traffic. The petrol version is reported to give 18.6kmpl. Clearly, the Diesel Beat is a good frugal car.

It was a pleasure driving this car. Note that the diesel version which weighs 1027kg is much lighter than the petrol variant and this further enriched my experience. The driving position is quite comfortable. The steering wheel is light, smooth and weighs just right at high speeds. Unlike most diesel cars, it has a fairly light clutch. It has 165mm tyres which offer wider contact patch for more efficient & stronger braking. The car is pretty safe to drive and maybe this is the reason that the company has provided airbags & anti-lock brakes only in the top variants. The new Beat has a modified gas charged suspension setup which makes driving more fun. The cornering is quicker as well.

The price of the base petrol variant is Rs 3.92 lakh and that of the diesel variant is Rs 4.72 lakh (ex-showroom, Delhi). This makes the Beat one of the most affordable diesel cars.

The looks are more attractive, driving experience is more fun due to the suspension tuning and the car is very fuel efficient. The facelift's package looks good but it is not well armed to take on its competition. The comfort features in entry level variant are very limited. Also, there is no automatic transmission. More equipment and power is what we expected.

A great review indeed. Your writing style adds much to already excellent content.
Now coming to the product itself, well- it does not seem to be a great buy. Lack of comfort level and auto transmission are really missing. Apart from being fuel efficient, could anyone find anything special about this automobile? I don't think it will be capable of handling the competitors.