Mercedes first unveiled its CLA45 AMG at the Indian Auto Expo 2014 and it is now going to launch it in India in the second half of this year. The much awaited ML-Guard and the GLA Concept car were also revealed along. This was an event that I just couldn't miss. It was very special for Mercedes-Benz as well. Last year, the company managed to sell 9003 cars and 2014 is again an optimistic year. The company officials said that the entire range of AMG powered vehicles will be brought to India by the end of 2014. The AMG version of Mercedes baby sedan is expected to fetch good sales. Last week, I got an opportunity to drive this car and test its power. It is not just one of the most exotic looking sedans but also most quick & powerful. Continue reading the article to know what all the Mercedes-Benz CLA45 AMG 2015 offers. 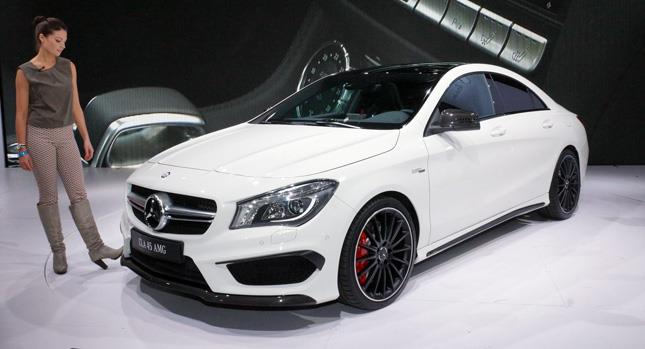 The recently launched Mercedes-Benz CLA45 AMG is more distinctive and has sportier styling cues. It clearly differentiates itself from the regular run of the mill CLA-Class cars. As it has a unique matte grey 'twin-blade' grille with large front splitter, large air intakes & side air-cooling ducts, it looks more aggressive than the non-AMG Mercedes cars. The 'Turbo AMG' badges can be seen on front quarter panels. Its crisp details, perfect proportions and fluid lines catch attention immediately. In fact, look at it from any angle and the car catches your attention with its exclusive design. The Mercedes-Benz engineers seem to have combined all their know-how and hit designs. Overall, it looks like a baby CLS from outside.

From inside, the design is practical. The interior matches the exterior's flamboyance when it comes to sporty designing. The especially kitted-out AMG cabin looks luxurious. The carbon fiber trim, brushed aluminum instrument panel and the metallic paddle shifters make the experience all the more special. The cabin is virtually identical to that in the A-class but you would find some major differences from the regular CLA cabin. For example, the gear lever is provided at the back in the centre console. The AMG measures 4691 x 2032 x 1777mm and the boot volume is 470 litres. Space is clearly not a problem. If you compare the front and rear, there is relatively less space in rear. The weight of 1585kg also seems ideal for a car of this size. If we talk about the Indian roads and conditions, I found it really practical. The only disappointment was the low chin which means that passing over speed breakers needs more care & caution.

AMG always emphasizes on the engines it makes and CLA45 AMG is just another wonderful example of this. The new Mercedes-Benz CLA45 AMG comes with a 1,991cc, turbocharged petrol engine gives a maximum power of 355bhp at 6000rpm and a maximum torque of 45.9kgm at 2250-5000rpm. You get record breaking power of 355bhp from just two litres which is amazing. The engine is called 45AMG due to its mind blowing commercial vehicle-like torque of 45.9kgm. The 2-litre Front, transverse, AWD four-cylinder engine is coupled with a 7-speed 'SPEEDSHIFT' dual clutch & automatic gearbox.

I have reviewed hundreds of cars in last three years and in most of these high-specific-output turbo engine driven vehicles, there is plenty of lag. This one is different. I loved the experience as there was no waiting for the turbo to wake up and get charged. There was absolutely no spike in power and the engine felt good- linear & progressive. Except for a minor step-up in power at 2000rpm & at 4000rpm, the power delivery was smooth like butter.

The new AMG is super quick as well. Its four-wheel-drive system helps it hit 100kph speed in just 4.6 seconds (fastest car with four-wheel-drive system). From 80 to 180kph, it was so quick that I was literally taken aback. The top speed is 250kph. It feels rapid at even low speeds so you have to be a bit careful. Every time I accelerated it hard, the connection between the seat back & the accelerator pedal felt so good. The steering weighs right at high speeds and is accurate. The grip is also good which helps cornering easy. However, the sounds produced by the AMG's signature trapezoidal exhaust system with four outlets are disappointing. The exhaust note is slightly muted by AMG standards. It is loud enough after crossing 4,000rpm but nowhere close to what you hear in the mighty V8s. The good thing is that the engine causes less harm to the ozone layer in contrast to the V8s.

When in the attack mode, the 7-speed dual clutch transmission sends power to all 4 wheels for maximum traction, making the AMG so quick. Its speed is maximum in the Race Start mode option. Clearly, there is so much for speed lovers like me. The car behaves well in the usual Comfort and Sport modes.

Even if it is a four-wheel-drive system, handling is not compromised and it is as good as a rear-wheel-drive car. Just the approach at corners is different as you need to enter corners harder, turn it in later and exert power a little early. I agree that this makes the driving experience a bit dull at medium speeds but the overall performance is really impressive. It was more than what I expected from a regular AMG.

The CLA45 AMG is expected to be priced at Rs 85 lakh (ex-showroom, Delhi).

The Mercedes-Benz CLA45 AMG is one of the most beautiful sedans I have seen and the driving experience was just amazing but the price tag makes me wonder if I will buy it. The highlight of this car is its AMG engine which is the most powerful in-line, four-cylinder engine in the world which is mass-produced by Mercedes. For this, it is priced under the E63 AMG. If speed is your passion and the eight-figure sticker is not an issue, go for this car. You would love it.

A classic review of a classic car by you. It comes with a very high price tag. So I am not going to buy this but thanks for this article. Your article will help me to compare this luxury car with other cars in the same price tag so as to know the best one.