If you don't mind loading your system an 1.92 GB data that has in store an exciting new game, then Xbox One has got a new indie game for you. By the courtesy of the ID@Xbox program, Worms Battlegrounds is the latest one in the Worms franchise from UK-based Team 17 which has been running successfully for quite a long period of time.

In general Worms games do feature a more-or-less lengthy single-player campaigning, which do not contain any great storyline or any common thread to hold the parts of the games in a synchronised manner. You and your team will have to compete against single or multiple AI teams through a series of death-matches. Here you have to deal with different puzzle levels or things like ninja rope challenges that keeps breaking things and have to prove your skill to accelerate your scoreboard. 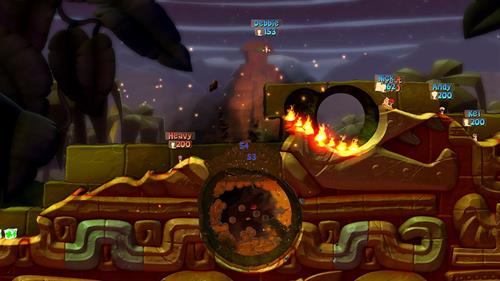 Worms Battlegrounds would instantly engulf you with its beautiful starting with the voice over of the British actress Katherine Parkinson.

The story is all about the evil Lord Crowley Mesmer who has stolen the Stone Carrot, which is a magical artefact creating the World of the Worms. Mesmer and his army of hypnotized Worms were carrying the Artefact in-hand, it gets holed up inside a museum. With the direction of the oddball narrator who can be at the same time funny and then in the next moment make you angry, you have to break through the museum and bring the Carrot out.

Based on a history-based environments, Battlegrounds has brought a new dimension in imports in comparison to the previous Worm games. In the actual levels you have to monitor and manoeuvre only a single Worm. But in case you need to direct a full-fledged team, depending on the level you are currently in, you have to concentrate on navigating platforms and mazes, and then go on fulfilling the different sorts of missions rather than only killing those enemy worms. 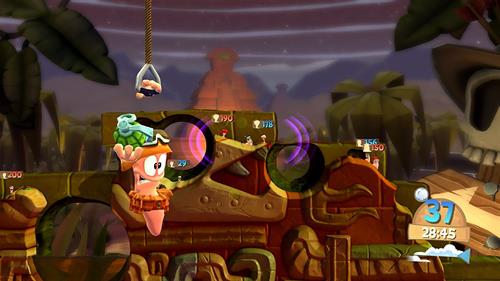 Worms Battlegrounds has something exciting to offer for the multiplayer lovers. It will allow four players sharing a single controller! Even without any personal Xbox Live profiles they can keep continuing. Sign in as a guest, and then have direct access to the teams created by the host player. What's more surprising is that this is a special privilege for only the guest players. What's more? You can go on creating teams of your choice to strengthen your side.

Once you have set the number of players, all you need to do is to choose between the Forts and the Deathmatch modes. Your mission will be to kill all the enemy Worms from both modes, but in case of Forts it will put each team within its own base rather than selecting them randomly. Then there are the custom games, where the players are allowed to choose the landscape and then opt between the landscape shapes, they can also select the density of those explosive barrels and the different other objects available for them. One can also get to create his own level for the local games, but the only hitch is that sharing it online will not be allowed.

Battlegrounds has included clan support as its latest feature! Now form a clan, sketch out an ideal logo for it, and designate ranks for its members. Clans are there to participate in leagues and battles against the opponent clans, that adds up new life to the classic Worms multiplayer mode and that will have quite a long-term effect.

Pros:
Worms Battlegrounds Xbox One has included quite a number of good features like large and spectacular environments, dynamic water, day and night cycles which can be enjoyed in each individual level, and there are five exclusive visual themes that marks the game as a unique model.

Overall Worms Battlegrounds Xbox One as a multiplayer game with the right combination of features can claim a price which is justified.