I have Ubuntu 14.04 LTS running on my laptop. Things were better in this OS but I am not able to reduce or increase the brightness. I tried using keyboard shortcut as well as the brightness controls but nothing worked. So I came to know that it is a bug. In Ubuntu forums I found that this problem persist in selected laptop models. Mine is a Sony Vaio model with hardware specs like Intel Core i3 , 4 GB RAM and 64 bit OS. The Ubuntu developers reported that this issue is found in graphics. To solve this issue you need to edit the grub file.

Steps to solve the brightness issue in Ubuntu

1. Open your Terminal and switch to the root user. To switch to root user, use following command.

2. You need to edit the grub configuration file. The grub file is located under etc -> default. To open it use following command.

Leave a space after Gedit and then write the remaining command without space.

3. Now a text file will open. There will be few lines in that file. Search for the line that contain GRUB_CMDLINE_LINUX_DEFAULT. Replace the line with following command. 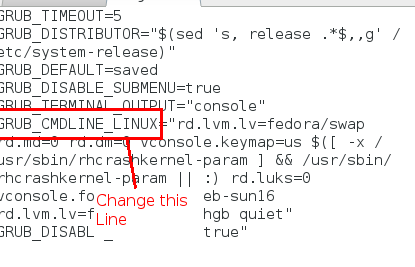 4. Once the change is made in grub it needs to be updated. To update the grub type following command.

The above command will update the grub config file. Then restart your computer to apply the changes made in grub.

Cause of the issue

Ubuntu Linux comes with default graphics driver which is the ACPI backlight driver. If your system has an Intel or Nvidia graphics driver it won't recognize. In above steps you have changed the driver according to the vendor. In my case the vendor is Intel and thus the Intel graphics driver will be loaded automatically. An issue occurred because your grub file specifies to load the ACPI driver instead of the vendor's driver when system boots.

Read How to install Ubuntu OS in a PC installed with Windows OS?