Car manufacturers all around the world are busy making crossovers these days. Even big German manufacturers which are known for their large Autobahn cruisers with V8 engines are making smaller cars. Mercedes-Benz is one of them. The company has recently unveiled its first GLA crossovers. This year at the Auto Expo, Mercedes showcased the production make of its GLA. It will be offered in two variants, GLA 200 Sport & GLA 200 CDI in India. Unfortunately, higher variants like GLA 250 Sport and 220 CDI will be available in only international markets. We don't know how long we will have to wait for them.

The new 5-door crossover hatchback faces severe competition against the Audi Q3, BMW X1, Volvo V40 Cross Country and Range Rover Evoque. Will it lead the segment? This weekend, I took out the new Benz test car on road to explore. Continue reading the article to know what the 2014 Mercedes Benz GLA 200 CDI model for India is most likely to offer. 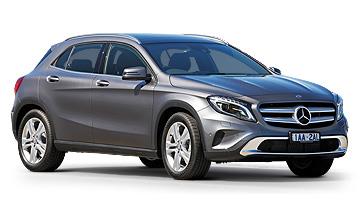 The new GLA 200 CDI is an extremely stylish small car that looks very much like the Mercedes A-Class hatchback. It has the same C-pillar, headlights and front fenders. Its standard 18-inch alloy wheels, bi-xenon rain sensing headlights, electric tailgate and crisp details catch your attention immediately. The new model of Range Rover Evoque in the segment is extremely striking but I must say the 2014 GLA 200 CDI is no less. It looks glossy and sleek but yet muscular. Some people may call it an SUV because of its big size but with its narrow fields of view through windows and its tapered roof line, it feels more like a hatchback.

From inside, the cabin again reminds you of the A-Class. Its sturdy leather upholstery looks elegant and gives a great feel. As expected from the Mercedes, the quality, fit and finish of materials used is top notch. There is good 421 litres of cargo space when the rear seats are up and 1235 litres when down. This puts it on par with the rivals BMW X1, Audi Q3 and Range Rover Evoque. It is more spacious than most low price compact SUVs in market. This makes it perfect for families. When I take out my family on vacations, my daughter likes to carry a whole world of toys and books along with her.

While the CDI's ground clearance is 177m only, that of the BMW X1 is 179mm and that of the Range Rover Evoque is 215mm. The car is low-slung if compared with the rivals but the driving position is 40mm higher than the A-Class. I felt that the style as well as driving position, both are compromised this way and it needs extra attention when driving on city roads.

The media system operates via a dial on the armrest console. The dial is more quick and responsive than touch screen and helps the driver remain more alert. Some other exciting features include blind spot assistance, brake assist system and satellite navigation. As is the current trend, expect the petrol variant to have more features than the diesel variant. Safety features include 9 air bags and Electronic Stability Program (ESP). The only disappointment was the electronic gear shifter (now moved from the centre console to the stalk on right of the steering column to give bigger armrest and storage) which feels fiddly and unpredictable, especially when working jointly with the electronic parking brake.

The new GLA 200 CDI comes with a turbocharged diesel engine that gives a maximum power of 136 HP and a maximum torque of 300 Nm at mere 1,400rpm. The 2.2-litre four-cylinder engine is coupled with a 7-speed automatic gearbox in the Indian model. This is an upgraded version of the same 2143cc turbo-diesel engine used in the A 180 and the B 180 CDIs. Though the engine clatters at idle and shudders on restart, it remains very smooth & silent at normal operating revs.

The turbocharged engine is meant more for economy than performance and I am ok with it. I have been recently looking for a big and fuel efficient SUV and it seems that the search ends here. It gives a fuel consumption of 4.6 l/100km. The fuel economy is not much but it is the best you would find in the segment. I drove this car on uneven terrains- on highways and mountains. Thanks to the best in class drag coefficient, the CDI returned over 17.5kpl. Like the Mercedes A Class, the 200 CDI also has MFA FWD system. With its highly efficient gas pressure shock absorbers, low centre of gravity and stabilizing bars, the GLA gives excellent ride quality and handling. I totally enjoyed driving this luxury car.

The top spec diesel engine version of the new Mercedes Benz GLA 200 CDI is expected to be priced between 27 - 30 lakhs (ex-showroom). This would be double the price of most non-luxury compact SUVs. The price fits between that of the sedans & hatchbacks in the Mercedes portfolio. Globally, it is available since April 2014 but in India, it is expected to be launched in September. They will be brought here as CBUs.

Call the 2014 Mercedes Benz GLA 200 CDI a large hatch or a small SUV but undoubtedly, it offers a lot of luxury at comparatively low price. It is more stylish than the Mercedes B-Class and more practical than the A-Class. The new crossover hatchback competes against the Audi Q3, BMW X1, Volvo V40 Cross Country and Range Rover Evoque. If you compare them all, I would say that except the low slung design and the unpredictable gearbox, everything is very impressive in the CDI. In fact, most features are class-leading. Personally, I am a Mercedes fan. So, if like me, you can't afford a Mercedes SUV, you would definitely like to consider this one.