Real Cricket 14 is not an insect game. Just thought it better to make that clear in the start itself unless you are thinking to it be one more of the simulation games like Goat Simulator.

Real Cricket 14 is a cricket sports game made by an Indian company, Nautilus Mobile. They are an independent mobile game studio who started back in March 2013 with their first title - Song of Swords which went on to win the Nasscom's People's Choice Indie Game of the Year award. 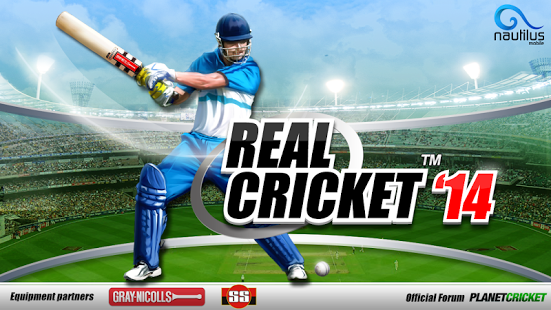 With Real Cricket 14 they bring a cricket game for mobile platform which earlier could only be found for consoles or PCs like Don Bradman 2014. It has beautiful portrait like 2D graphics, a good number of controls for both batting and bowling, joystick based controls (which are much better than the usual swipe controls) and much more. Real Cricket is available for both Android and iOS users.

This game requires high level Android phones with 1GB RAM, > 1GHz Processor & Android OS 4 and above. The game size is just 47MB. As I mentioned before, the graphics are portrait like and look very beautiful in each frame. The truth is, the graphics are actually hand made. The game is so "Real" that you even have a toss in the beginning of the game. You chose 'heads' or 'tails' and depending on the results you get to decide if you want to bat first or bowl first. 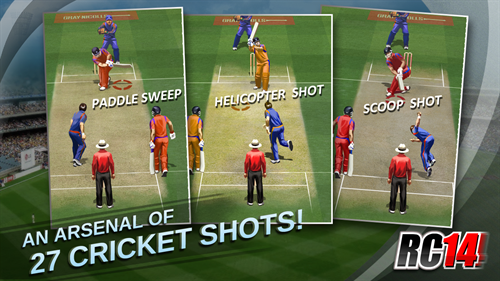 The gameplay of Real Cricket 14 is very real. There are over 27 shots in your arsenal while batting and the bowling itself is just not the usual 'click on the spot for first touchdown'. The ball swing mechanics that the developers from Nautilus have included in this game have really took bowling in a mobile game to the next level. For instance, if you want to do a proper spin ball then you need to bowl slower and generate maximum flight. If you throw a pace ball then there won't be much spin on it. 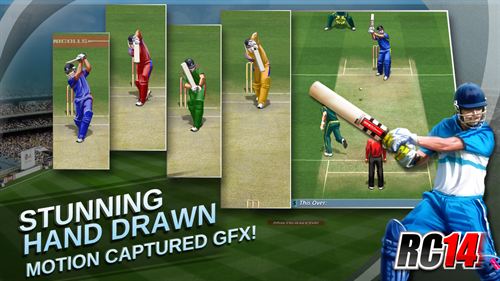 This difference in bowling will affect your or the AI's batting style. No longer you can see the swing meter and guess the shot with 100% accuracy. If your bat and pads have space between them then the ball can easily slip in between them. You can even take down spin balls by going out of your crease and take the shot full on with the risk of getting stumped by the wicket keeper. Real Cricket 14 is probably the only game for mobile and tablets that has so much dynamism in their gaming mechanics.

Real Cricket 14 is not a short burst game of a few overs though it can be played like that if you prefer so. But, if you like playing long games with 20 or 50 overs then that too can be played on Real Cricket 14. When you play on mobile or tablet you are not exactly looking for a long stretched game. Your battery consumption takes a heavy toll with this game and if you don't have a charging socket handy, you definitely won't want to take on an innings in the game. The game developers thought about this problem well and have programmed the game to auto save your progress at the end of each over. This way you can spend whatever time you want to play and when can't continue any longer you can just close the app and continue later whenever you want to.

You can select the number of players you want in the game, the overs and the information you need. A thin bar at the bottom of the game also displays useful information during the game like your present run rate, number of overs finished as well as the the number of balls remaining in the over. 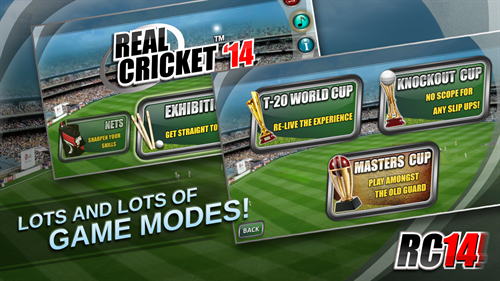 Real Cricket 14 is a Freemium game which means that it has advertisements and in app purchases. You can remove the ads by making a one time payment of Rs.50. For the same amount you can unlock more features of this game like T20 World Cup, Knockout Trophy, Master Teams or Super Over.

The biggest thing we find missing in the game is multiplayer mode. It is hard to imagine a game like this with multiplayer mode. I mean, one can imagine the fun it would be to enjoy this game with a pal or two. However, if you love the game of cricket and prefer or are not just looking the multiplayer cricket fun then this game is definitely for you.

Real Cricket 14 is an amazing game with beautiful 2D graphics and great audio suiting to a cricket match. We encountered no bugs while playing the game and it ran smoothly without any lag. If you love cricket I would definitely suggest you to give this game a try. I am sure you would not be disappointed except for the absence of multiplayer mode.

With the increasing popularity of smartphones, the craze for mobile apps is also increasing. Developers have launched apps related to different fields making it easier for users to access data in those fields. There are various cricket apps that help mobile users to remain updated about latest cricket news. This post discusses some of the popular apps for live cricket.

I like it, i use play games on my phone