It has been over 25 years that BMW is manufacturing its high performance oriented vehicles. The company recently introduced its 5th generation M3 sedan, the new 2015 BMW M3 alongside M4 coupe at the 2014 Detroit Auto Show. It was for the first time that the Coupe was introduced at the same time as the M3, the four-door variant. At the event, Dr. Friedrich Nitschke, President BMW M GmbH explained the M3 evolution by saying, "Four generations of the BMW M3 have blended motor sport genes and uncompromised everyday usability within an emotionally rich overall concept".

The idea behind this new sports car is to give people an experience of driving a race track inspired car on road- something which all speed lovers would love to have. More than 40,000 examples of the previous BMW M3 Coupe were built before the fifth generation M3 could be created. If we look at the history of the M3, E30 M3 was the first racing car (in late eighties) built for on-road use in Germany and only 5,000 units were annually produced then. Since then, it has been the dream of millions. I myself grew up with posters of the M3 in my room. Some may complain that the new BMW M3 is not the real M3. Actually, it's sedan and the drivers' darling has always been the two-door M3 Coupé which is now known as the BMW M4. The mechanics of both are identical. It is one of the most awaited cars of this year. Continue reading the article to know what all the 2015 BMW M3 offers. 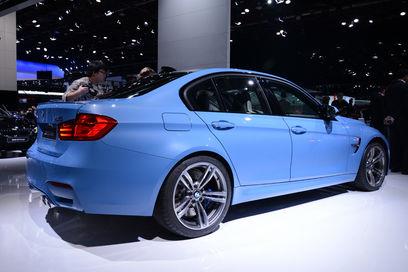 The new 2015 BMW M3 is an extremely stylish car that looks like the M4 coupe from most angles. Its front, however, is redesigned to impart it a sportier look. The more dynamic looking front has the same chrome Black kidney shaped grilles but the front air intake is larger and the carbon fiber roof with a bulging power dome is new. The new quad exhaust system and the tail lamps at rear make the car all the more attractive. It has 18 inch lightweight Aluminum wheels but there is also an option of 19 inch wheels. The new M3 is bigger in size and offers more interior space. As expected from BMW, the fit and finish of materials used is excellent. Security features like ABS are in place. There are so many customization options that you can completely transform the look. The styling & design from exterior as well as interior looks similar to that in the new 5 and 7 series cars.

Like all M models, engine is the heart of this fifth generation model. The new M3 comes with an inline-6 cylinder, high revving turbocharged petrol engine that gives a maximum power output of 431 hp and maximum torque of 550 NM all the way up to 5,500rpm. Here, power takes over and provides a strong top end till redline of 7,300rpm. This outstrips the range figure of the older BMW M3 by around 40 per cent. There is no noticeable surge from turbo because even when the driver is not stepping on gas, it stays on half of its delivery rate.

From the V8 mill of second and third generation M3 vehicles, the M division has gone back to in-line format due to its smaller size and lighter weight. While a 4.4 litre V8 achieves 100kmph speed in 4.3 seconds, this 500kg lighter engine achieves it in 4.1 seconds (with the optional seven-speed M Double Clutch Transmission) which is super quick. The top speed is 155 mph. Initially, the team preferred V6 engine but later, it settled for in-line format.

The 3.0-liter engine with M TwinPower Turbo technology (which is recently developed for BMW M3 Sedan and the M4 Coupe) gives 40 percent more power than the fourth generation M3. It also reduces fuel consumption & emissions by 25 per cent. Some people have been skeptical about power delivery and demanded a naturally aspirated unit but let me tell you that power delivery of these turbocharged engines is very linear. Unlike the M5 model, the power is very well balanced with weight and this can be easily felt. It was very light on feet on its Algarve circuit and sprang from outside of the corners and into apex instantly. The engine is coupled with a twin clutch paddle shift or a six-speed manual gearbox.

To ensure an impressive race track capability, the M3 comes with a track-specification cooling system that maintains optimum temperature balance for the engine, transmission & turbochargers at all times. To further accentuate the racing character, Nürburgring-Nordschleife circuit was used. A lot of effort was put in by the engineers who worked closely with BMW Motorsport's professional racing drivers. Racing drivers Timo Glock and Bruno Spengler were part of the extensive testing done during development phase.

The idea of offering people an experience of driving a race track inspired car was successfully implemented. By using lightweight materials like carbon-fiber-reinforced plastic (CFRP), carbon fiber roof, aluminum for its chassis & body components and a lighter engine, BMW reduced 80 kilograms from the overall weight of the predecessor and thus made it faster. The new technology used ensures maximum dynamic ability and efficiency. The 2015 BMW M3 sedan is one car that all speed lovers would crave for. It competes against the redesigned versions of Lexus IS F, Mercedes Benz C63 AMG and Cadillac CTS V. It is more stylish, luxurious and efficient than the previous M3 model. I would rate it 9 out of 10. The response in market is yet to be seen but what I liked most about the new M3 is its high technology which makes driving so easy and forgiving that even an amateur can fool around with it.