Mercedes has recently launched the new Mercedes C Class which is more spacious, luxurious and performance-driven. The new C Class 2015 is launched globally but it will come to India next year only. The company is not planning to replace this fifth-generation car till 2021, i.e. for next 7 years. The new, upgraded C-class is set to be here for long and so there is a lot of hype surrounding it. Enquiries for Mercedes entry level sedans has already plunged and the car is expected to see high sales but we must not forget that it will have to compete against BMW 3 Series & Audi A4 which are doing very well in Indian market. Will the new sedan lead the segment? Continue reading the article to know what all the Mercedes C Class 2015 offers. 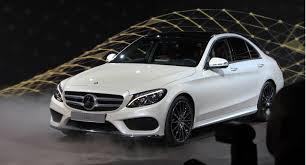 The new C-class is an extremely stylish car that looks like the new S-class from some angles. It has the same big hood, the posterior design and the trademark fascia but its smaller dimensions make its rump appears less natural. The car measures 4686 x 1810 x 1442mm. It is not just bigger than the previous C class model but is also 100kg lighter. This makes it more aerodynamically efficient and thus, more ecologically efficient (by approximately 20 percent). Its crisp details, fluid lines and sporty grilles catch your attention immediately. The sporty look is enhanced particularly by the fluid lines which follow the inclined front windscreen, roof and the small rear section. Clearly, it is one of the most attractive Mercedes car launched in last ten years.

From inside, it again reminds you of the S-class. There are five pop-out chrome vents around the dash, of which the middle three rest atop the plank-like center console. The console terminates below a big infotainment screen which measures 8.4-inch. Unlike the typical Mercedes Benz's COMAND infotainment system, there is a very small guard positioned above the COMAND control wheel. The highly functional touchpad on the console is standard on all Mercedes cars and is super-quick but if you prefer a more traditional control scheme, you can use the chrome COMAND wheel. The well crafted & detailed dashboard comes with a fresh design and beautiful layered effect.
The cabin is very spacious. The compact seats further enhance the space available. The boot volume is 480 litres, up by 5 litres if compared with the previous model. The doors are also wide open so that getting in and out of the car is easy. The front seats are comfortable but the rear ones are too low and do not give enough thigh support.

There are five drive modes: Individual, Sport, Sport Plus, Eco and Comfort. The Individual mode allows you to customize the systems as per your personal taste. You can set the engine, gearbox, throttle, steering & dampers to desired levels independently, i.e. without interfering with other settings. All this sounds complex but when you take out this car on road, it feels that the high-tech car is making all calculations by itself and reacting accordingly. In Sport mode, you would notice that the steering feels a bit heavier and there comes a lot of grip on hand, particularly from the front wheels, making it easy to carry high speeds into corners. The Sport Plus mode also gives linear steering which weighs up very nicely even under aggressive cornering. In Comfort mode, the ride quality was very smooth and absorbent. The car remained calm over medium sized bumps but over large bumps, the suspension felt too soft. Unlike its counterparts in other countries, the Indian C-classes are expected to come with coil springs only (no air springs). The Indian E-classes also had the same configuration.

The new C-class is super quick. It hits 100kph speed in just eight seconds. The electrically power assisted rack and pinion steering is very accurate, weighs just right and improves fuel economy as well. It is so accurate that you would not need a secondary movement of the steering wheel in order to adjust the chosen line. Steering the C-class has become even more effortless and maneuvering it in tight traffic is now a cake walk. Ride quality & handling are exceptional. The new multilink front suspension which claims to maintain more consistent tire patch & camber control as compared with an unequal-length control-arm setup or a strut is responsible for this level of handling. The multilink front suspension was also illustrated on the press release by Mercedes chassis engineer Reiner Scheu.

The C-class faces severe competition from BMW 3 Series and Audi A4. When it comes to dimensions, it lies between the BMW 3 Series which measures 4624 x 1811 x 1429mm and Audi A4 which measures 4701 x 1826 x 1427mm. The boot space of all three cars is same. This means that there are some variations in size but overall, the space inside is impressive.

The new Mercedes C-class is expected to be priced at Rs 38-45 lakh (ex-showroom, Delhi). It will be available in India only next year.