Mercedes Benz has recently launched its new car, the ML 63 AMG. After it's A and B Class versions, the company is now manufacturing AMG versions of all its popular cars. The company launched the G 63 AMG this year and now, it is the ML 63 AMG which is based on top of the line SUV GL63 AMG. It targets a super niche segment. The A of AMG stands for Aufrecht and the M stands for Melcher. These are two former engineers of Mercedes Benz. The AMG gives more power than the normal versions and hence, an advanced suspension set up is used to handle this amount of power. Continue reading the article to know what all the new Mercedes Benz ML 63 AMG offers. 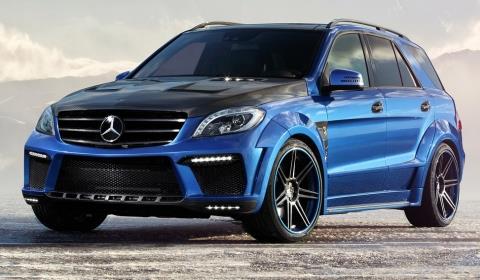 The focus when designing this AMG version was on high performance but quantity & quality of luxurious elements in it is not sacrificed. The glossy body measures 4817 x 2141 x 1762mm. The big three slat grille is embossed with the Mercedes three pointed star and the number plate is below it in a mesh. The headlamps on sides are quite small if compared with those in the previous model but the LEDs make up for that. The two improved air inlets on bonnet are difficult to differentiate. The bumpers look similar to that in the Launch Edition ML 350 CDI.

From inside, the cabin is large & airy. The boot space is good 690 litres. As expected from a Mercedes car, top notch materials are used. The dashboard layout with AC vents and sundry rotary dials is exactly the same as before. The stance is high enough to give a commanding view of the road. Everything looks perfect inside. The only drawbacks here are the subdued Alcantara roof lining and the flat-bottomed leather steering wheel.

The new Mercedes-Benz ML 63 AMG comes with a 5461cc twin-turbo petrol engine that gives a maximum power of 557.4PS at 5250-5750rpm and a maximum torque of 760NM at 2000-5000rpm. Despite being a petrol engine, the 5.5 litre Affalterbach tech engine belts out 22-50% more torque than what a normal diesel engine does. Also, it has eight cylinders in contrast to the four that a normal car has. It enables the ML 63's 2.4 tonnes to achieve 100kph in less than five seconds- nearly as quick as Cayenne Turbo. The maximum output of this engine gets doubled due to the AMG effect. It is coupled with a 7 speed torque-converter automatic gearbox. The 'Manual' and 'Sport' transmission modes give sharp responses. When selecting the Manual mode, do not allow the engine to run into the rev limiter where it cuts in quite aggressively. The Sport mode gives a flat ride and does not give up much body control, unlike the case in Manual mode. Press the gas pedal and the gear changes occur instantaneously, making it likely that you lose track of speed. The kerb weight of the car is 2345kg and yet the steering gives good feedback & control. It is accurate but feels uninspiring. As the speed increases, the power-assisted steering gets stiffer. The wheelbase of 2916mm gives it good stability but this kind of car is meant only for highways. Even while driving in the AMG suspension's Sport+ mode, if you get your lines wrong or demand too much from the Pirelli P-Zeros & all-wheel-drive system, the ESP begins to get rather harsh. At this point, it feels that the weight is not controlled tightly. The Porsche Cayenne Turbo S is far better at ride quality and handling.

You can reach the 100kmph speed in just 4.7 seconds. The top speed is 250kmph. The trigger-happy car is super quick and feels like it is built exclusively for the countryside. The fuel economy is only 6.8kpl but that was expected from a luxury car like this. The suspension is good and the car efficiently passes over the bumps without crashing through them. The brake pedals have a tendency to go very soft after hard use. I can't say that it is well suited for Indian roads and traffic conditions but overall, the ride quality is decent.

The ex-showroom price of ML 63 AMG is Rs 1.5 crore in Delhi. It is almost three times the price of regular M Class with dual engine options. The model is available at all major Mercedes-Benz dealerships across the country.

AMG engines are very powerful and give the same high torque & hauling capacity as a good SUV running on diesel does. The Affalterbach tech AMG engine in the ML 63 AMG gives even more power & grunt. Thus, if you like petrol cars but do not want to compromise with performance, go for an AMG. The throttle response is exceptional. To define the ML accurately, I would say that the car lies between the GL's 'scare-seven-people-simultaneously' and the G-Wagen's 'butch' abilities. The new 2014 ML 63 AMG is another name for high performance. However, there are some drawbacks like poor mileage of only 3kpl. There is less practicality and thus, the price appears too much. Also, the design is quite subtle keeping in mind the price being charged. Considering all aspects, I feel that it is just a vanity car that only connoisseurs for sophistication would like to buy.