TVS Motor Company has recently unveiled its new commuter bike, Star City+ in Bangalore. The USP of this bike is its 109.7cc engine named EcoThrust, which is believed to have an efficiency of 65kmpl in traffic conditions. The company has now come up with its top end variant (with option of electric starter) as well. The original TVS Star commuter bike was launched way back in 2005. It became a huge success then. Over years, it has gone through numerous modifications. Reliability has always been the key aspect of this sturdy small motorcycle and this time, riding comfort is emphasized in its design. Continue reading the article to know what all the 2014 TVS Star City+ offers. 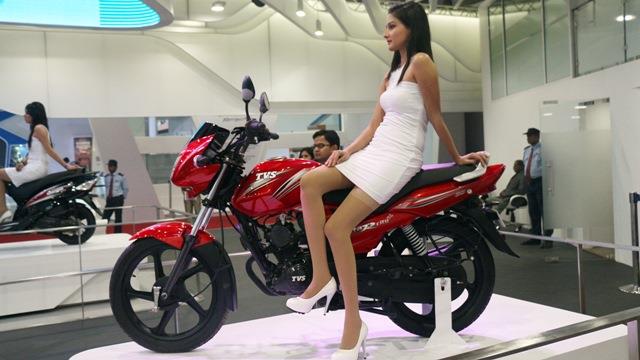 The 2014 Star City+ is a very stylish and light weight (109kg kerb weight) commuter bike that will definitely catch your attention. It measures 1980 x 750 x 1080mm. It looks almost the same as the older version but it is loaded with a longer list of features. The company claims that the new City+ is the most feature laden bike in its segment. It comes with standard 5 spoke alloy wheels, stainless steel muffler guard, white adjustable shock absorbers, chrome finished handlebar, clear lens indicators, easy access choke position, paper air filter, number plate illuminator lamp and an electric start option. The engine, wheels and exhaust muffler are all coated black. Its prominent tail light cluster and handy grab-bar make it look very appealing. The palm grips provided are excellent. The paint quality is good. Mirrors used are also decent enough.

The bike comes with a stylish white background analogue-cum-digital cluster having power & economy mode indicators. The cluster also has an aluminum pillion handle with side holding and a service indicator- features which are not yet available in any other bike in this segment. The well padded seat provided is very comfortable and gives an upright riding posture. Riding comfort is well taken care of in this bike, unlike the previous versions.

The new City + comes with a four-stroke, twin-valve 109.7 cc petrol engine (named EcoThrust ) that gives a maximum power of 8.18bhp at 7000pm and a maximum torque of 0.88kgm made at 5000rpm. The engine gives a nice exhaust tone but the performance is not as quick & peppy as in its competitors. Also, the torque is achieved at a very low rpm, if compared with other bikes in the segment. The good thing is that its high & flat torque curve ensures excellent ride quality at low speeds. The throttle response is excellent. The single-cylinder & air-cooled engine is coupled with a four-speed, very efficient gearbox which works in all four-up pattern. The company claims the efficiency of City + to be 85kmpl in test cycle and 65kmpl in all real world situations, i.e. in heavy traffic conditions. This is in fact, the USP of this bike. Economy is further enhanced due to the roller bearings on engine rocker arms which cut friction. The piston is coated with an anti friction coating called Moly. The tank size is good 10 litres. The claimed top speed is 90kmph. The bike is fast enough as it took only 8.1s to achieve 60kmph.

The engine is very tractable and ride was smooth in uneven terrains. The wheelbase of 1260mm and the ground clearance of 172mm ensure good stability. The clutch feels light and good. The suspension provided efficiently absorbs large bumps around corners. The exhaust system is optimized by a large capacity air-filter. The induction is greatly improved. The new, modified spark plug gives improved combustion. For ignition, an intelligent 3D ignition system (TCI) is used. It gives continuous load based variable ignition timing. The charging system is also highly efficient.

I have to say that handling is excellent. Riding this motorcycle in high gear at low speeds is as easy as riding it at maximum speed. Control levers are quite comfortable. Another good thing about the City+ is its all new tubular single cradle frame which comes with telescopic forks in front & twin, five way adjustable hydraulic shock absorbers at rear. It runs on 17 inch rims. The new tread pattern tyres give good on-road grip. If disc brake option would have also been present, it would have been even better. Currently, 130mm front and 110mm rear drum brakes are available for both- electric and the basic, kick-start variants.

The new Star City+ bike is available at all major dealerships of TVS. The company plans to make it available across the country in a phased manner. The bike is available in four colors – red, blue, black and silver. The price of the top variant is Rs 44,000 (ex-showroom, Delhi) is also reasonable. The basic, kick start variant is priced at around Rs.41,000.

The Star City+ 2014 is an excellent commuter bike that appears just flawless. In the previous versions, riding comfort was an issue but TVS has done a good job this time in keeping the ride quality and handling at par with the competitors. It comes loaded with a whole new range of features, some of which are not even available in any other bike in the segment and all this comes at a very reasonable price. Overall, it is a good package and if you are looking to buy a new commuter bike, you can consider this one.

Do you know TVS unveiled some really good scooters at Auto Expo 2014? Want to get information about TVS Graphite concept scooter? Please read further to check out the features and specifications of TVS Graphite scooter along with its estimated price.

Are you looking to buy a feminine scooter with good looks and great on-road performance? Please read further to know about the upcoming new Scooty from TVS. Here, you can find information, review, price and features of TVS Scooty Zest.