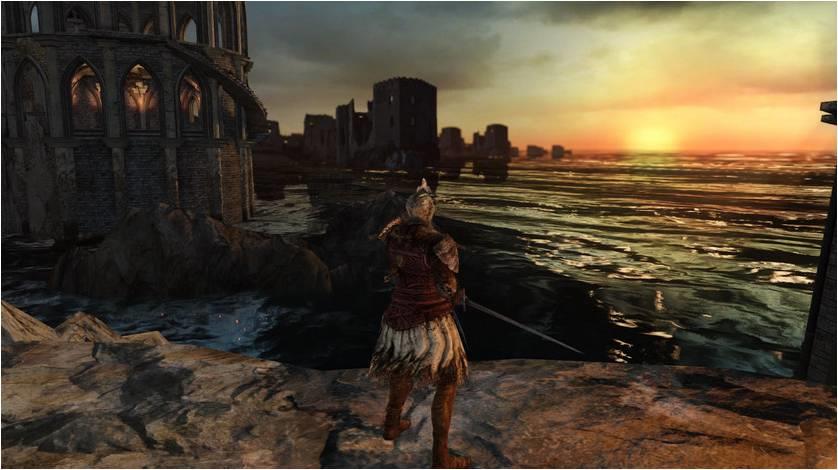 When you will encounter first group of enemies, do not kill them together. Instead kill only one at a time. Now, when you will reach to the creek, you will find an archer on the opposite side of this creek (this archer has a quite good range). So, for killing enemies which are in archer's range, you should lure them in opposite direction to archer so that you as well as enemies are out of his range. Now, you can kill them without bothering about that archer. After this you have to light the "Bonfire" on the opposite side of the creek. Now, reach to the end of this creek, where you will see a swordsman and that archer. So, first kill the archer on your left using any ranged weapon and then go for that swordsman. Don't think you dealt with all the enemies here because there's one more enemy here - the dead axeman near the water's edge.

Go to the cave which is in upward direction. Inside cave, you will find a ladder which will lead you to jungle. Once you step in the jungle, you will see a heavy patrol here - three enemies, one dead enemy and one archer on the catwalk above you. Here you will also find "White Knight" but do not engage with him so early. It's better to lure them back inside the cave so that you will be out of archer's range. Now, lure them and kill these three enemies inside the cave. After killing, head back in the jungle and for dealing with that archer, first see towards right to break in the wall. Then climb the ladder here and move upside the stairs. A couple of enemies will come to stop you. After dealing with them, reach to the top of the stairs and then move towards the right direction. Here, drop on the catwalk and kill that archer and do not forget to collect the valuable treasure here. Now, after you have dealt with this bowman, it's time to take care of the "White Knight". Reach him and get ready to fight with him.

How to kill the White Knight: It is not easy to defeat him, but you can if you learn his tactics. He uses unsuspecting attacks which are quite fast. So, its better to keep your shield up. The shield can block most of his attacks. But if he tries to make any other attack (which cannot be blocked by shield), get ready to roll away. So, for defeating him, keep your shield up and try to get to his back by moving in a circular direction. When you are behind him, you can backstab him or can give him some of your strikes. Keep doing this and slowly & gradually, you will kill him. After killing him, you will acquire "Heide Sword" which is very useful in this stage. 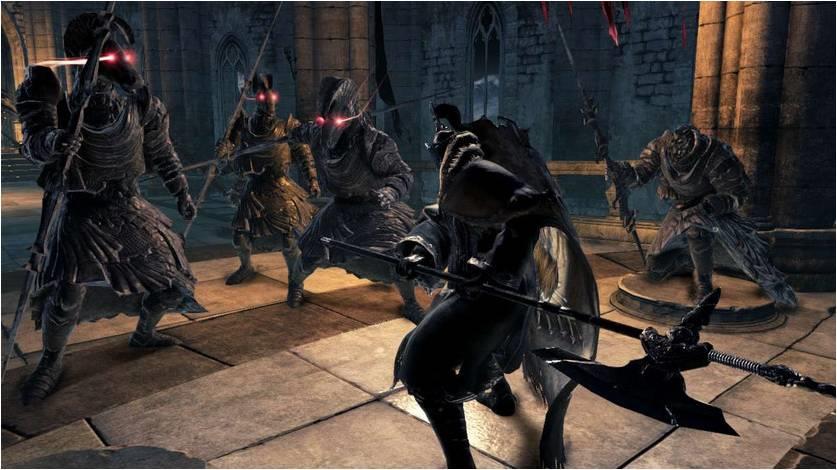 Now, go to the exit of this area which will lead you to underground tunnel. You will be ambushed by a dead enemy near the entrance of the tunnel. Once, inside the tunnel, go to the left and then in a room. Here, you will be attacked by two enemies, one in front of you and another behind you. Kill them and collect the treasure after breaking the bookshelf. Now, exit the room and go towards the left. You will also encounter another enemy near the hall. After killing him, continue to your path and once again get ready to kill an enemy having a two-handed sword. Once you reach to the stairs, go into the small room towards right of stairs so that you cannot be hit by the bowman. Here, you will also see an enemy throwing firebombs. Kill him by giving him some of your ranged attacks.

After reaching to the top, collect the item which is towards rubble. Now, head back to the ladder and climb it. After climbing go to the right corner and kill the hollow sitting here. After killing, loot its corpse. Now light the "Bonfire" behind the door. Here you will met an old woman "Melentia" who sells some good stuff like spare human effigies, some spells, etc. She also sells the key to the blacksmith shop in Majula. So, refill yourself here. Now go access the ladder here and move down. Here you will be attacked by an enemy. When you will kill him, another dead man will stand against you. So get ready to take care of him as well. Here you can observe that there is no other way instead continuing the single path. This path will make your way to the balcony. Here, you will be attacked from back by a dead-man. 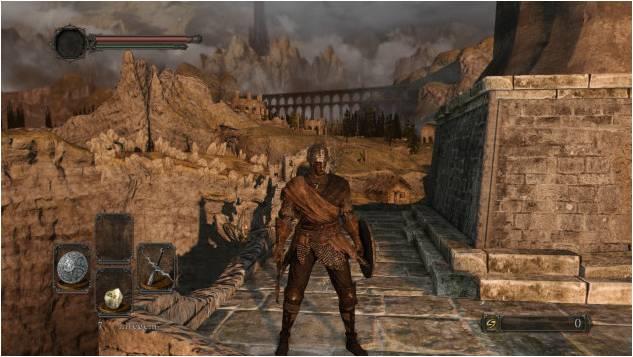 When you will reach the large fallen tree, do not climb it immediately. Instead wait at the bottom for a couple of enemies to come after you. Kill them and now start climbing the tree. While climbing, kill the archers on your way. In this area, you should collect the valuable which are scattered all around here. You can also find a "Tianite Shard" on the ground level. Now climb the roof nearby and then jump on another platform from roof. From this platform access the hole in the wall. Once you are inside the hole in the wall, you should leap back as a giant boulder will come running. Now, go to the left and help a man crawling in the dark. He can provide you a key which can be used to access a house in Majula. Head back from where you have came and then climb up the ladder. Go to the Majula and access the house for collecting the valuables. In this house, you will find a number of valuables like - a Respec item in a chest, a Pharos Stone in the library, etc. Return to the forest by using the Bonfire which you can find near "Meletia".

Once you are again in the forest, you can see a large tree trunk. Climb this till you reach to the top of the wall. Here fight with your enemies and continue your way to the top. You will also see a ladder on your right but I recommend you to do not access it. This ladder will lead you to "The Pursuer" boss but I know our player is not ready for such a big fight. Continue your way and you will find a soldier above throwing firebombs towards you. So take him out with your ranged attacks. After this, blow those black barrels and they will reveal a shortcut in the wall which will take you to the "Bonfire". Go down using the stairs in one of the corners and then kill the two enemies waiting for you. Continue your way towards down using another long ladder. Once you are downside, collect the treasure from the corpse which you will find in a small room situated at the bottom of the stairs. Here you will see an iron gate in front of you. But do not go in that direction and instead peek into the chamber in the right. When you will peek, immediately get back as an automatic ballista bolts system will fire at you. Due to this, you will encounter several enemies. You may fight them here or climb the ladder nearby and then use your ranged attacks to take them out. 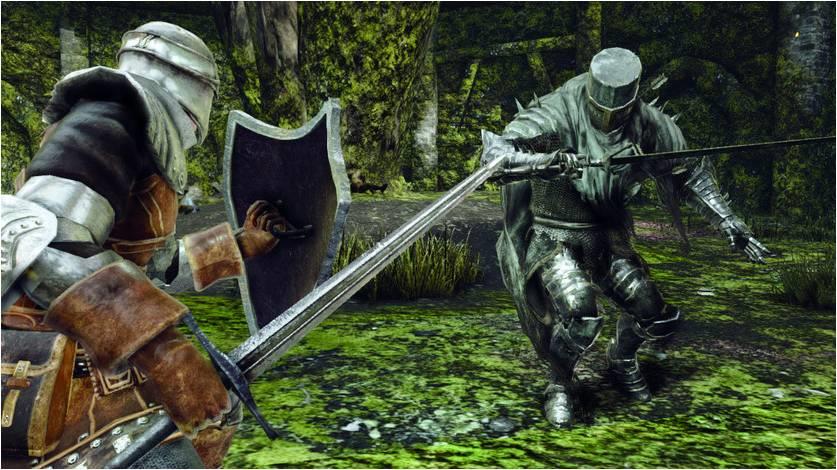 After making this area safe, go towards the hole in the floor which is at the back corner of the room. Here you will find a number of corpses. And in one of these corpses, you will find a "Greater Soul Arrow". Below you will see a chest from which you can have "Chloranthy Ring". For opening it, you have to use the Pharros Lockstone which you gathered from the house in Majula. But if you have not gone their till now, you can buy the Pharros Lockstone from the "Meletia" merchant to whom you met near the previous bonfire. This chest is trapped, so when you will successfully open it immediately step back to avoid the poison cloud. Retreive the "Tianite Shard" from this chest. The Pharros Lockstone will also show you a week area of the wall. Attack this wall and you will find another useful collectibles including "Chloranthy Ring". Now head back to the stairs and then make your way towards courtyard. Here you will see a large armored enemy. Do not even think to kill him here as there are archers and fire-bombers on your upper left. So, lure this armored enemy in the room behind you and use ballista fires to instantly kill him. Or you can climb the ladder and then take him out with your ranged shots. And if you want to face him hand-to-hand, it will not be difficult to kill him.

Now return to the courtyard and take right. Here you have to kill two enemies waiting for you and then access the ladder here. Using ladder make your way to those archers and fire-bombers. Kill them and then grab the treasure on the dead body. Also collect from the chest below you. Now, backtrack to the ladder and climb up. Make your way to the corridor and down the stairs. Now, access the gate if it is open, otherwise go back and drop down to see a man waiting. Talk to him several times and then again head to the courtyard and then to the room facing the ocean. Here, kill the two halberdmen on the left and then also take care of the dead soldier on the ground to the end of the room. Now collect the treasure on the long stone sword but here, get ready to take down a swordsman on the upside using your ranged attacks. After collecting the treasure, head by down and then through the mist. Here, access the iron door. I recommend you to recharge yourself by going up the ladder and to the fire. When ready, go back to the iron door and then take the lift down. At last, kill the guard in the hall and then head through the mist. Now, you will face "The Last Giant" boss.