Vroom, Vroom... goes the back tire of these bikes made of steel rode by riders whose hearts are even more stronger than steel. The dust and rocks fly in their wake as the tires leave behind them a trail of wheels run by monstrous motors. The bikers do wheelies, back flip as they leap into the glory of taming the land beneath them...

And then they are forced to wait on the sidelines while their fuel depleted bikes get recharged again. Checking their watches and tapping their feet they listen to an instrumental music meanwhile.

Trial Frontier is a development from publishers RedLynx and Ubisoft. This is actually a mobile version of the hugely popular Trials biking series. With Ubisoft involved in the development there were huge worries what it would entail and seems that those worries where not misplaced. Trial Frontier features an amazing gameplay with lots of humor and frenzied bike racing but under the disguise of constrained free-to-play model. 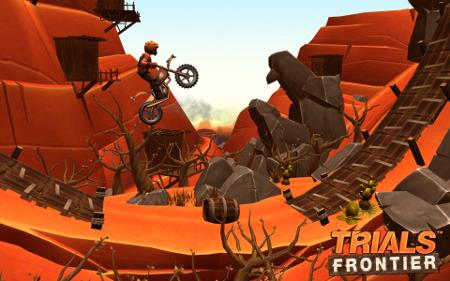 The story is quite similar to NFS Most Wanted. You are riding on the top of the racing circuit with your dirt bike but someone named Butch doesn't want to see this happens. He gets in a trap, knocks you off and wrecks your bike. You wake in a town where the town folks have you and they hate Butch as much as you hate him. Now they want you to take your own and their revenge by bringing him down.

The revenge is not going to be easy. The adventure in Trials Frontier is distributed in several tracks on which you can race on when you want (of course after you have unlocked them). However, the story will unfold further only when you complete the tasks given to you by the towns folks. You will also get the rewards like blueprint for new bikes only when you do the quests given by towns folks.

As expected from a game coming of the storyline of Trials, Trials Frontier is a complete fun ride with beautiful control over the bike. Flips and jumps are fun to do just like in the original game and the townsfolk give you some amazingly crazy tasks to complete. 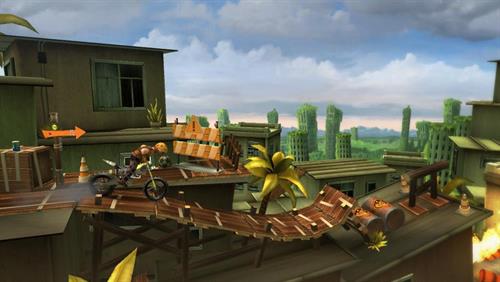 However, few hours in the game and you get to see the free-to-play game limitations to seep in. You would be spending a horrendous time getting the resources to upgrade your bike and as soon as the stage starts you start losing fuel which itself takes a considerable amount to refill, enough to put you off several times in the game.

To say in short it has an energy system which is completely similar to many Facebook games. You spend a majority of time for your fuel tank to replenish and less time actually playing the game. Once in a blue moon your tank capacity might increase when you level up but that's it. Either spend premium currency to get instant fuel or keep up your patience. With many such games abolishing such energy based limitations, it is quite surprising to see it in a new game by such awesome publishers.

Trial Frontier is a great game to play set in the wild west with fluid game mechanics, enjoyable gameplay and nice audio but the energy system just makes you wish to uninstall the game sooner or later. It would have been better to rather take a few bucks from us in the starting itself and let us have fun playing such a game.