The idea of being a goat might not have occurred to you before reading this piece. Perhaps you have fantasized about being in the shoes of likes of Superman or Batman, but a goat? Ewww! I used to tuck a shawl on my back and shout from up above the roof "I am Superman" when I was a kid, but as you grow up, you realize that those fantasies are never going to come true. But they are still buried deep down out wish-lists.

Coveting to have access to some superior supernatural powers like those guys in comics and TV shows have is nothing new. It's only natural to yearn for something we can never have. That's why there are countless superhero action movies, comics, games and TV shows that are really popular among masses. We love be a part of it and enjoy these forms of entertainment.

What about goats? Have you ever entertained thoughts about being a goat? What would it be like to be one? You know, they are much more than a source for potent delicious meat. It would suck to be one of them in real life, right? You never know when there is going to be a sword snapped access your neck. Horrible!

But what about a game? Sounds like a deal? It can't hurt to get a taste of some goat-like walking and feeding for a while? I know it sounds like a joke. Why would someone even bother making a game about goats? Well, it turns out that someone bothered to make one. The name of the game is 'Goat Simulator'. 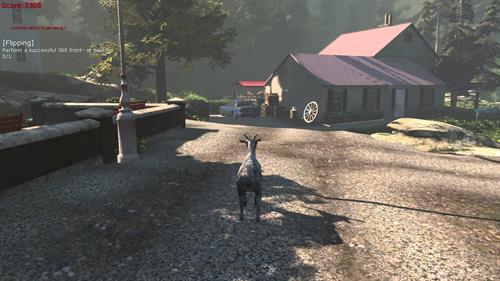 A huge world to roam around

Just like other open-world projects, Goat Simulator is going to be embedded in a huge open-world environment. It wouldn't be fun at all if we are being forced to go down a constricted path following a narrow pathway. It would really spoil all the fun. An open world, however, will allow us to roam freely and do things at your own pace and will. We can, for instance, decide to cause trouble for human beings by eating or sabotaging their crops. Heck kids in this game get scared when they see a goat. It's really hilarious.

Don't go around messing with the elders though. If they see you, they are going to capture you most probably. Better yet, they are going to murder you instantly if you are not cautious. And unlike other games, you are defenseless here. You can't do anything to defend yourself other than trying to sprint as fast as you can.

It's a real journey of a life of goat. It's simulation of his daily activity from his birth till the date he dies. 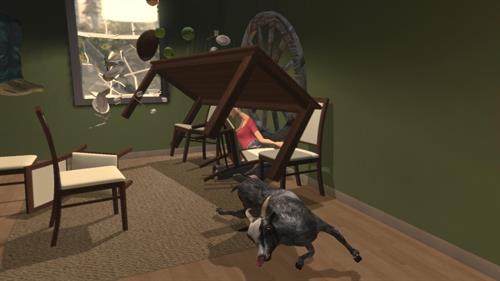 The world is really huge with endless possibilities with only caveat that there isn't much you can do in this game. That's not to criticize these developers. But the mere fact that you are a simple say goat means you are not going to be able to do much in this game at all. The world is huge with a staggering amount of locales to be explored, but then again, what can you do if you are goat? Not much, as it turns out. If you bar scarring people and running off to the high hills, you are not left with a lot of options.

Not a parody or joke

If you have played Surgeon Simulator, you know that these games are not to be taken seriously. As the name of this game suggests, you are supposed to play as real surgeon, but instead, you are someone who doesn't even know how to handle an operation knife properly and inadvertently murder people on the operation bad. While it's really hilarious to see things go awry in the middle of an operation, this isn't really what is expected from a simulator.

Goat Simulator, however, is a really serious operation. It might look like that seriousness is the last thing they would had in mind while broaching an idea for this game, believe it or not, they are serious about this project. So when the said that they are going to simulate a goat in real life and copy every pattern, they are going to do it. That's why it's taking so much time in being prepped for launch.