Of course, the phablets refueling the rise of smart device market, it comes as hardly surprising that Nokia has got into the big-screen party with its new two phablet models- Lumia 1320 and Lumia 1520. At last, better or worse, the phablet segment is not anymore the exclusive dominion of Android OS, as Nokia has done a remarkable entry into the big screen arena. Nokia has been late to the bandwagon, not because it was not fast enough to keep up with fast changing smartphone market, but mainly due to the fact that Windows Phone platform didn't have the support for big screens as well as powerful processors until very recently. Definitely, the manufacturer has been knowledgeable of demand for big-screen devices for long enough to build up a plan that enables them to focus on value-conscious and premium buyers. 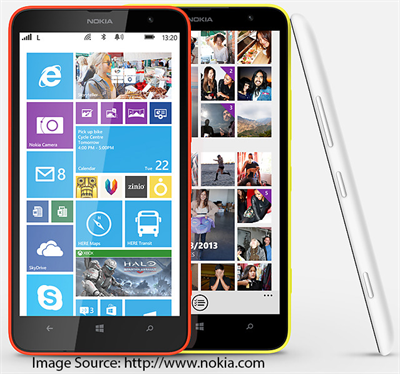 Undoubtedly, Nokia Lumia 1520 is one of the most awesome Windows smartphone available out there, which is offering a whopping 6-inch display panel and a powerful quad-core Snapdragon 800 chipset. Like I said before, Lumia 1520 wasn't the only phablet model the manufacturer brought along. The company brought in another budget friendly phablet model named as Lumia 1320. It is also a very big Windows phablet with eye-popping 6-inch display, and is quite a magnificent presence. Being a budget friendly sibling of the Lumia 1520, it ditched many of that device's premium features to sell for around Rs.23,000. Let's find out, does it offer good enough to sides out its Android-based opponents.

Despite being a budget smartphone, the Lumia 1320 has the premium quality build you would expect from Nokia devices. Like other budget friendly Lumia devices, the Lumia 1320 has a detachable plastic back whose design properly copies the unibody appearance of the company's high-priced phones. It's difficult not to make a comparison of the Lumia 1320 to its elder sibling. Whereas the 1520 was a tad squared off at the edges and flat at the rear side, the 1320 has curvy edges. It's hefty, but feels more convenient in the palm. It's available in various colors too - red and yellow as well as the more traditional white and black. Measuring in at 86mm broad and 164mm long, it isn't the most easy to use device to operate single-handed, and is a long way from best for those with very small mitts. The handset is at least thinner at 9.8mm thickness, however, it is a little hefty at 220g, and can feel unpleasant and cumbersome to pocket. The button arrangement in the device continues to be the same as other Lumia handsets. Just under the display, you can see usual standard Windows Phone buttons - Start, Back and Search. On the right hand side of the handset, there are the Power/Lock, Volume Rocker and Camera keys are positioned while leaving the left edge is fully blank, and the only ports you'll see on the bottom and top are the micro USB port and headset jack respectively. The back of the device has the camera, flashlight and speaker grill sorted in a neat line down towards the middle.

Lumia 1320's massive 6-inch ClearBlack, IPS-LCD panel, display delivers an HD 720p resolution with the pixel density of 245ppi. Its 1280 x 720 resolution IPS LCD display delivers just 245ppi, which means icons appears to be blurry around the sides and text is not as crispy as most premium handsets presently offer. This may sound a little bit underwhelming, but the screen is still sufficiently detailed. Furthermore, colors are precisely produced, but slightly missing in saturation when compared to the best display panels out there. Even so, thanks to the True Color Technology, the color on display looks really good makes it ideal while using the Windows Phone Operating System's myriad tiles. Outdoors visibility of the display is not an issue, and the display is bright enough and should do its role even under direct sunlight. Finally, while the device's screen is promoted as super sensitive, this only does the job if you tweak the touch settings and setup touch sensitivity to 'high'. Once you done that, the 1320's display can manage to register touches precisely so that you still use the display even with gloves on. Coming to the protection, the company used Corning Gorilla Glass 3 in order to guard the display against superficial scratches.

The most significant dissimilarity between the 1320 and its pricey sibling is the camera. Nokia's latest smartphones are camera-centric handsets but the Lumia 1320 is an exception, featuring a 5MP camera on the back and a VGA shooter on the front. At the same time, Lumia 1520 getting a version of Nokia's PureView technology, enables lossless digital zooming and superior picture quality via pixel clustering. Coming to the camera performance, Images shot in daylight are quite clear, and colors seem to be rich and well reproduced. Also, its camera app allows you adjust white balance, ISO and exposure compensation. At nighttime, results weren't as great as I would have expected. The images shot turned out a tad noisy, but shockingly rich in detail. Finally, you don't face any issues with distant objects and close-ups, and 1320's Camera adjusts itself to dark and light areas nicely. By default videos are shot at 720p, but if you wish to turn it into 1080p, then you can do it via camera settings. The quality of video captured was completely acceptable

Nokia Lumia 1320 features Windows Phone 8 Operating System with Nokia Lumia Black along with GDR3 update onboard. The new GDR3 update make Windows Phone 8 a somewhat superior operating system, bringing new features like more control over how the handset performs, true multitasking, etc. Now it allows users to edit the Glance screen, makes it possible for a option of notifications from messaging and calls to Twitter and Facebook to be available at a look without unlocking the device. Additionally, the latest version of OS brings an extra column of apps to the Live Tile homescreen makes much more room to personalize the homescreen of the device. Talking about apps, the company's popular Here Drive apps and Here Maps can be found on the live home screen, along with Microsoft Office, Xbox Games, FlipkartEbooks, Nokia Beamer, Adidas Micoach and Evernote. Even if you can't find the advanced camera app that seen on high-end Lumia devices, don't worry, it is now available for download on Windows store. There is also Camera360, which enables you to take photographs and apply effects on them. Obviously, you also have the access to Windows Phone Store, with gradually but consistently rising selection of games and apps. At the same time, surfing around the Windows Phone store is still a laborious task, with the suggestions suggesting apps that likely won't attract the majority of Windows Phone users. Despite the presence of Microsoft in the gaming industry, it's a shame that Windows phone still lacks number of games to offer.

The Lumia 1320 comes packed with a quad-core 1.7GHz Snapdragon S4 processor backed by 1GB of RAM, and it is good enough to handle the majority of apps in the Windows Phone environment. Its internal storage memory is not quite so amazing, as it packed with just 8GB storage, 2GB of which is already used by the OS. Even so, this can be extended up to 64GB via microSD card. Everything is smooth and responsive, except some slight lags in animated transitions of Windows phone, and when skipping up and down the full HD video clips. Loading up and switching between apps is not an issue in this device, thanks to fast Windows Operating System. But, you may notice some noticeable lag while running demanding 3D HD games, which are playable in spite of running significantly less smoothly. Surprisingly this device comes with 4G technology, something that still not available in new phones out there. As is very common in Nokia handsets, the call quality in this device is robust, and it makes use of a secondary mic for active noise cancellation while making calls. The speaker is loud and clear, and the other side caller can hear your natural voice without stressing to make out what you're telling.

The device is equipped with a pretty huge 3400mAh Li-ion battery, which lasts almost two days with average usage. Even though you increase the brightness level to the maximum along with the use of 3G and Wi-Fi continuously, this one won't run out of battery juice after a whole day. Despite having the removable back cover, its battery is non-removable.

The Lumia 1320 is a trustworthy phablet with a reasonable number of features that does not make a lot of concessions in regards to performance while comparing it with its older sibling the Lumia 1520. It performs well, as the hardware is good enough to deliver a decent user experience without awful stutters and hang times. Having a massive display is perfect for gaming as well as media playback, and it could have given apps more space to shine. Finally, both call quality and battery, while not first class for sure, and still leave little to hope. Certainly, it's a budget friendly handset, though the device's less-resolution display and average camera performance means users are unlikely to pick the Lumia 1320. Then again, this is quite a cumbersome handset when it comes to its weight. If you searching for a Windows Phone with large screen, then you have a option between the Lumia 1320 and the more powerful and appealing Lumia 1520, which costs you twice of Lumia 1320. If you are looking for budget friendly Windows phone with big screen and good specs, then this is the one you are looking for.

Read How to turn off SIM application pop up in Nokia Lumia?