This pop ups can be turned off in SIM applications present inside "mobile network". Let me make the steps clear.

1. Open Settings -> Mobile Network in your phone.
2. Scroll till bottom you will find 'SIM applications' box just above the learn more link.
3. Now scroll till bottom and you will find 'Airtel now!'. This option will be present only for Airtel service provider. I have no idea about other service providers.
4. Inside Airtel now! you will have option as Start/Stop as you can see in the below image. 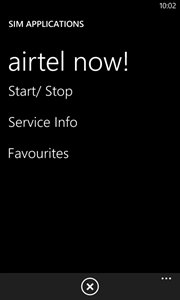 5. Choose Start/Stop and then you can stop the services. This will stop your phone from receiving unwanted pop ups.

This is the only drawback I faced after Lumia Black update. Finally I got a solution for this pop ups which was very disturbing while playing games and watching videos. If you get this pop up while watching video, then the video starts buffers from starting instead of interrupted point. Actually it is a Airtel flash message service. Once you turn it off you will get a SMS from Airtel stating that the flash message service is off.

Mine too is Airtel. This 'SIM applications' is hell a lot of disturbing, especially when watching movies. I will try this option.

I have Vodafone sim. I dont no knowhow to turn-off. Can you please help me?

Settings > Mobile Network > Go to Sim Applications(above learn more) > Under the Vodafone services There is an option named "FLASH!" click on it, then go to Activation under that there'll be an option to Deactivate, jus do that and finaly you will get "FLASH! OFF" press OK. Problem Solved :)

Same here. I too am also a Reliance subscriber. How to stop these flash messages? they irritates a lot. The Customer Care people aren't helping.

Thanks buddy. With that I could figure out for Idea operator also. The only difference is instead of 'Airtel Now' it is Idea Flash>Activation>Deactivate.

Thanks buddy...It was really helpful..

I have reliance GSM SIM card. How can I turn off SIM application service massage?

Thank you very much.

I have one more query. I bought a new Airtel postpaid connection. Earlier I had Java enabled phone in which I have to switch between settings like mobile office and all, but now I am using Lumia. In it, it shows a Mobile Setting option, when I switch on the Data Connection, my internet is ON. I want to know whether it is using Airtel Live settings or else?

Airtel Live charges heavily. Or, is it the general way to activate internet in Airtel ?

For Vodafone users
Settings-Mobile+Sim-Sim Settings-Sim Applications-Flash!-Activation-Deactivate..
i did it just now nd it works..
This was creating a mess while using the phone...

For Vodafone Users: Go to mobile>SIM. Then, SIM settings>SIM applications; after that, go in Flash! then do the activation and then just deactivate it.
I did it just now and it works! This was irritating me while using the phone or watching videos or reading pdf.

This article has not the correct useful information. Please see the below correct process about how to turn of the SIM application pop-up in your Nokia Lumia mobile handset.

That's all. It works perfectly.

It worked for me.Thanks

Thanks buddy. With that I could figure out for Idea operator also. The only difference is instead of 'Airtel Now' it is Idea Flash>Activation>Deactivate.

For Lumia 535 there were options called Notifications+actions, there you can find out SIM APPlications and turn it off.

Thanks. This is good for helping to save the battery and time with irrelevant work. Hope it will helpful to all.

Thank you for this article on how to turn off the SIM app pop-up in the Nokia Lumia smart phone. It was useful information.

Thank you so much for the information. This article on turning off SIM application pop up in Nokia Lumia smart phone was really useful.

Thanks a lot Avinash Damor. You saved my life from those irritating Vodafone messages!!

Thanks for your comments.

Thanks for the detailed guidance on turning off SIM app pop up in the Nokia Lumia smartphone. It works!

I am using Idea network. I don't know how to stop the above notification in Lumia 620.

For Idea Go to Sim Application then go to Flash services then you have Deactivate Option choose that option.Problem solved all Sim application flash services deactivated.

For any phone running Windows 10 and under:

Settings> Network & Wireless> Cellular & Sim> If using two sims select one of the two - Sim 1 or Sim 2 settings> Under Sim info select Sim Applications> select FLASH! from the list of services> Activation>Deactivate and confirm. That's it!