Sony Xperia ZR is the third offering from Z category of Sony smartphones. When comes to portfolio of smartphones, it appears that the company continuing to release various models that seem to be dangerously a lot like one another. Following the success of Xperia Z, the company's flagship device, Sony chose to give the design another spin and brought out a less expensive and smaller variant in the form of Xperia ZR, which can be safely considered as somewhat toned-down version of Xperia Z. Noticeably, this device features almost similar hardware specs and identical chipset from its predecessors, the Xperia ZL and the Xperia Z. Just like its older siblings, the device features IP58 and IP55 compliance that makes the phone dust-proof and waterproof, completely submersible up to 2 meters underwater for nearly 30 minutes. It also comes with capability to shoot high quality HD videos and superb pictures even under water. 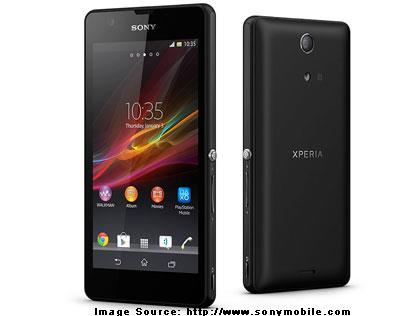 The Xperia ZR is available in four color variants - Black, White, Black, Mint and Pink. It follows same design tactics as company's other flagships but has a removable plastic back cover in place of non removable glass back and isn't as slim as its bigger sibling , even so it seems stylish and awesome. Sadly, this plastic cover attracts plenty of fingerprint smudges. It has noticeably thicker profile of 10.4 mm, compared to the Xperia Z's outstanding 7.9 mm thickness. Despite the fact, the device seems comfy in the hand and not feels hefty. It measures 131.3 x 67.3 x 10.5 mm (5.17 x 2.65 x 0.41 in) and has a reasonably good weight, weighing about 134g.

On the front of the device, it got a opening for the ear piece, the front camera, usual sensor on the top and 4.5-inch display which is a tad smaller when compared to ZL and Z. The control buttons for home, back and menu are added within the screen itself. The device has usual 3.5mm headphone jack and microUSB port, which are protected by two tight flaps because of the device's water-resistant nature. Just like its predecessors, its power button comes in the form of round chrome button that is placed in the centre on the right side along with the volume rockers and a dedicated camera button for shooting photographs( especially useful when shooting photographs under water). Moving to the matte-finished rear panel, there is a main shooter along with a powerful LED flash on the top and a small speaker grill with dust and water-proof mesh installed at the bottom part. Unlike Z and ZL, it comes with a removable cover and underneath there are slots for both SD card and SIM along with a removable battery.

Talking about ZR's display, it has a 4.55 inch HD TFT display with the resolution of 1280x720 pixels by giving a decent 323 pixels per inch, which is somewhat a bit lesser than HTC One's 341ppi. Thanks to the Sony's Mobile BRAVIA Engine, which makes multimedia content viewed on the device's display seem more appealing. The Mobile BRAVIA Engine 2 technology is used here for the better sharpness, color and contrast with less distortion and noise. The brightness level and contrast seems to be just average and not great, but still the display seems to be appealing than the Xperia Z, which was slightly dull. Overall, the image quality of the screen appears fairly good. Though you can notice that the brightness level, push to maximum, reduce the black levels and make them appear slightly grayish. It also features Gorilla Glass protection, so you don't need to use any screen guard to get rid from minor scratches.

The camera on the Xperia ZR is simple and pleasant to use. Thankfully, the device comes equipped with a dedicated camera button allowing you to pull off the camera from anywhere on the phone, irrespective of on what application you are at. It has similar 13MP rear shooter found in ZL and Z, and features Exmor sensor that is capable of shooting good images at 4128 x 3096 resolutions. This camera can shoot full HD 1080p videos at 30fps. Full HD video recording in HDR mode is also available. Just like other Android smartphones it features plenty of shooting modes, including Super Auto mode, which adjusts device's camera sensor to situations in which you want to capture the images. Coming to the image quality, the device's camera is good but not great and colors appear to be somewhat less natural looking. And, also you can notice some noise here and there unless you shot pictures in very bright surrounding. In low light conditions, the performance of the camera is decent but again there you can see some noise in pictures even shot with the flash light. The shutter speed of the camera is extremely faster, it means hardly you can notice any delay between capturing a photo and getting ready to take other one. Sadly, the front shooter is just a VGA camera, but its okay for video chatting. Overall, the camera performance is satisfactory and could be a tad better.

Sony Xperia ZR operates on Android 4.1.2 Jelly Bean, which is a tad disappointing considering the fact that Google already rolled out version 4.4 KitKat. On top of Android 4.1.2, Sony used its own polished custom user interface that is still good and convenient to use. It's definitely not the most feature-rich, but it is stuffed with simple animations here and there actually making it feel exciting and fun to use. All of the basic apps like Contacts, Phone, and Messaging have been customized by the company itself. Just like other Xperia devices, ZR comes with pre-installed Xperia apps such as Album, Movies, Walkman, and Track ID bring Sony style to multimedia consumption. Apart from usual Sony apps and Google goodies, other inclusions are the Small Apps, which can be use on top of what you're already doing. They are just simple tools like notes, browsers and calculators but they do help in multi-tasking. Third-party apps are also available, including office Suite, File Commander, Neo Reader and McAfee Security. Thankfully, most of these third-party apps are removable.

The Xperia ZR is powered by quad-core Snapdragon S4 Pro Krait processor with four Cortex A15 cores, 2GB of RAM along with Adreno 320GPU for better Graphic processing. It features 8GB inbuilt storage as well as the option for the expansion of storage up to 64GB via microSD card slot. The device comes with a lot of connectivity features, which include 2G, 3G 4G LTE, NFC, Bluetooth v4.0, Wi-Fi, FM radio and TV out, A-GPS and GLONASS.

Though the Snapdragon chipset used in the device is not as fast as latest Snapdragon 800or 600 chipsets, it's still among the finest performers in this segment and operates the apps and OS very efficiently. Thanks to the powerful CPU and GPU, the gaming on the Xperia ZR is outstanding. It means you can't even find any lag while playing HD games like GTA III, Asphalt 7, Nova 3 and NFS MW. It also accepts USB game controllers, so you can plug in PlayStation controller or similar controllers and experience console like gaming on it. Coming to the audio quality, except for the average volume levels, it delivers quite sharp and clear audio. The virtual surround feature also works very well. The media playback on the device is great and all thanks to the powerful Graphic Processor, you can't find any framing or stutter even when you play full HD 1080p content. Of course the device features BRAVIA Engine, which enhances video quality and makes them look much lively. The video player pre-installed on the device manages to play almost every video formats including MP4, AVI, MKV, XVID and DIVX with ease. Talking about Call Quality, the device has good signal reception and so hardly you can find any issues on it, such as signal drops. Though, the earpiece delivers slightly low volume level and in noisy surrounding it may be hard to hear.

The Xperia ZR features 2330mAh removable Li-ion battery. The company claims that it can deliver up to 470-520 hours of standby time and up to 11-13 hours of talk time. Also the device comes with a power saving feature called stamina mode, which automatically disables the background activities as well as reducing the processor performance while the device's display is turned off.

The thicker profile, plastic cover, average battery life, poor viewing angles and less outdoor visibility of the device's display clearly reflects the compromises that were made with the Sony Xperia ZR. However, despite this fact, the device has a fairly large 4.5-inch screen with a good resolution, and a extremely powerful quad-core Snapdragon processor, so you can at least make sure that you're getting a device that won't have any issues running even the most complex application or game. Furthermore, the device comes with IP58 certification, which makes this device well suitable for Indian conditions. Priced at an MRP of Rs.27,000, Xperia ZR appears to be a worthy contender in the market overflowing with android handsets loaded with quad-core processors. If you are looking for an Android handset with powerful hardware and great multimedia capabilities, then the Xperia ZR is a great choice.

Last week, Sony launched their next Android based rugged smartphone, Xperia ZR, which is the successor of Xperia Z. It comes with underwater HD video recording facility. Through this article, you will get to know the latest specifications and features of this Sony handset.