I have been using BSNL WiMax for last 6-7 months and have been terribly disappointed with the unreliable internet. I wanted to switch to wired broadband from BSNL, but for some or other reason, I couldn't get that either. Finally, based on suggestions from some of the neighbors, I decided to switch to Asianet broadband services. Providers like Airtel do not offer wired internet services in my area. Even though I have some bad experience with Airtel, I was impressed with the wide range of high speed plans they offer.

Tip: Before you sign up for internet connection, call the provider and ask for any deals that are not published. Most providers will have special deals when you switch from another provider, even it is not listed in the plans. Read further to learn about one of such special deals from Asianet.

Asianet offers internet services in most part of Kerala. They have a good number of plans and the prices are on par with BSNL and Airtel. In fact, they have "unlimited internet" plans, starting with Rs 435 per month. Many of the Asianet internet packages are cheaper than BSNL plans.

You can find all internet plans from Asianet here - http://asianetdataline.com/package.aspx. 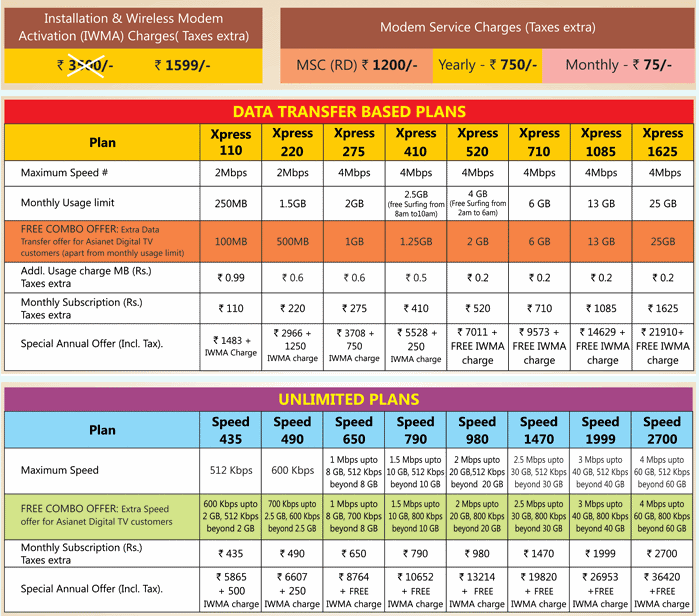 While discussing with Asianet representative, I found out they have a special offer for people switching from other providers. This offer is usually not published and not listed in their website. To avail this offer, you need to specifically ask or demand.

Here is the deal. If you are currently using another broadband service from another provider like BSNL, then show your recent internet bill to the Asianet representative. If you are switching from another provider, you will get the Asianet WiFi modem for lease at an initial payment of Rs 600. Without this offer, the cost for leasing the WiFi modem is Rs 1800 (including taxes). So, you can save Rs 1,000 up front while taking the internet connection. You have to pay an additional Rs 1,000 as deposit when taking the connection, which will be adjusted in your first month bill.

You can read my signing up experience and review of Asianet broadband in Kerala.

Review of Asianet broadband: my experience in last few months

My initial experience with Asianet internet service in Kerala

Are you looking for Asianet broadband services? I have been using it for a while and you can read my review and experience here.

BSNL WiMax Review: My experience with WiMax service in India

Read this article to learn my experience with BSNL WiMax in Kerala, India. I have provided a detailed review of the WiMax services from BSNL.

FTTH (Fiber to the Home) Data plans of BSNL in India

The following resource gives you detailed information on FTTH (Fiber to the Home) internet services and various data plans which are available in India. If you are in need of high speed and efficient internet access, then FTTH is one of the best options and to know more about it just read the following article which shows BSNL plans in detail.

Hi Tony. I am absolutely delighted to find some one else with similar problems as mine. I too now have a BSNL Wi Max connection to which I had migrated from Asianet which I had used for many years. At that time my internet requirement was mostly checking emails and an occassional browsing on my computer. For that I was using the basic plan from Asianet. All that changed when I bought my Ipad and found the versatility of this device was wasted on asianet. Firstly Asianet needed a browser based login and that page needs to be kept open for maintaining the connection. In an Ipad once you open another tab on the browser I found that the previous page goes to sleep...this is how the it conserves battery charge. This means that I then have to keep my computer on all the time (and login to asianet) whenever i use ipad. At least this was my experience ..if you have found a work around for this please let me know. I therefore moved to BSNL wimax unlimited which had given a decent speed of ALMOST 1mbps although they advertise it only as 512 kbps. Since wimax is always on and does not require a browser login I now have instant net access on all my wifi devices. But Now I hear that Asianet is coming up with much higher speeds from next month onwards ie in the range of 10 mbps. I would like to move back to Asianet but only if they can solve this problem with their connection.

I could not resolve this problem yet. It appears that you can close the browser in which you logged in to the Asianet broadband, but it will eventually timeout your session and your will be kicked out from the net connection.

I spoke to multiple levels of support at Asianet and the solution to the problem is, switch to an alternate plan - unlimited plan of 512 kbps. In that plan, no monitoring of bandwidth is required and hence they don't enforce logging in. In all the higher plans, they need to monitor bandwidth so that they can reduce the speed when you exceed the threshold.

I am disappointed with the overall reliability and performance of Asianet.

I had used Asianet long time back but I found their service very unreliable.

Moreover, you will not be able to use your own modem. In BSNL you can buy any modem and use it.

I am also planning to take an asianet broadband connection with wifi...
plan is of Rs.649 with 2 mbps upto 8 GB and 521 Kbps after.
Will I get the promised speed...?
Which Wifi Router will they give and charge what?
Should I buy D-Link DIR-600M Wireless N150 Home Router instead?

I also own an Ipad and should I login every time I plugin?

I do not have a P.C so how do I operate this.?
Contact: abinbenny10@gmail.com

Even I migrated from BSNL Wimax to Asianet. Wish I had gone through this article before, as I just got the connection done at my home. Hope they have improved. I chose the Xpress 1199 plan. I heard (it was already late!) they throttle torrent speed. Hope its not applicable for limited usage plans... Anyways fingers crossed.

Can I get a Wi-Fi connectivity to my Sony Xperia T3 mobile? I am residing at Arasumoodu, Kulathoor. If yes please give the ratings at the earliest through email address swamynr77@gmail.com.

I prefer BSNL over Asianet and the two best broadband plan in Kerala are:

I am writing this response to all those who are planning to shift to Asianet or who are already with this useless connection.

I had been using BSNL BB for the last 10+ yrs. IN april 2015, my son visited his friend and got impressed with downloading speed of Asianet. He suggested and immediately I took this and on April 27th mine got connected. Since I love speed, i took xtreme 1085 plan which promised 10 mbps speed throughout without any data quota. Being a combo plan user they said I will get 26 GB data usage both download+upload total. Initially for 2 weeks I was happy with 10 mbps or worse anything 4mbps and above. But whenever I had to call customer care for speed issue, immediately they will increase speed to 10mbps. But last 2 days I had a bitter experience with speeds like 2mbps. Today it was 0.7mb. When I called they said some problem in line for 2 days. So I waited and tried today. Again I called customer care and they did something keeping me on hold and finally it came to 0.9mbps. The guy said finally this is the best they can do. Else send screen shot to their helpdesk. I got very angry with the lousy reply and attitude. I paid around 3500 for the new connection and within 1 month I got fed up with this stupid idiotic connection. The fellow had told me anytime I can shift to a unlimited 1mbps plan ULD 575 or so. But today I was told only ULD 520 is there which has 1mbps till 2.5gb thereafter 512kbps. So I told on his face I am closing my connection. He welcomed it as his tone revealed it, ass if they are expecting such a reply!! It was good that I did not surrender my BSNL plan. In fact, the gentleman @ bsnl told better keep it in safe custody, as there are many customers come back after having a bitter experience from Asianet.

So, my advice to all is that stay away from this Asianet connection. Its crap. A total waste of time and money.

Please don't go for Asianet. It is the worst internet service provider in my experience with worst customer care & the worst technical help. As for the speed, OMG it stuck, even though they are offering (for my plan 10 Mbps) stunning speed, I never felt it. At times even mobile data in 2g has shown better result than this. I continuously raised complaints and they continuously closed it without resolving. Poor Service totally!

I am from Ernakulam (Kaloor). Can anyone suggest which one is the best internet service provider in my area?

It would be good to extend this connection to all places. It has already reached to the nearby places, but not to my place & even the subscribers are waiting.