Ever since Square Enix has been inkling towards the mobile market, they have been doing really well. In fact, they have managed to turn profitable in last 3 quarters only due to this section. If it wasn't for mobile, they would have gone bankrupt a long time ago.

Mobile is where the profit is right now and to be honest, that's what keeping most developers like Square Enix afloat. They are not like the behemoth Bethesda with games like Skyrim on their hands. Just look at what happened with THQ, one of the biggest publishers of its own time. They went bankrupt all of a sudden even when they were going strong only a couple of years ago. How did it happen though?

Well, the answer is simple. They couldn't predict the market and interest flow within time and adapt their strategies accordingly. Until they realized that they have spent a bit too much in traditional gaming model, it was too late for them. The lack of a sustainable and flexible strategy is what sunken their ship so quickly.

They were too busy doing their own thing and making their own tablets when others were reaping the benefits of developing a portable device based strategy and churning out games on continuous intervals. They were so focused to fulfill that strategy that they forgot about how much they have left in the reserve.

Well, even though it was a painful farewell to the demise of THQ, we can't do much about it except lamenting over it. Instead, what others should do is take a leaf out of their books and learn from their purgatory. Fortunately for Square Enix, that's what they did. Not long ago, they were also in a similar precarious situation like THQ, but instead of being complacent about it, they decided to turn the tides in favor of them by tightening their lose screws.

What they managed to do is in front of everyone now. They shifted their focus on mobile and started eschewing from the console market gradually. That's what proved to be a lifesaver for them. If it wasn't for the abrupt shift just in the nick of time, we would not be seeing them on top right now. Granted, what they are doing is really aggressive, but sometimes this is what you need to do to survive in this tough business where others are ready to take your place if you aren't playing attention.

And they know that too. Doing mobile games doesn't means doing grade B games nonchalantly. Conversely, you need to be more focused and cohesive while doing games like Hitman for mobile. Turning one of your main console franchises into a mobile game isn't going to be easy for them at all, but what they have showcased us so far looks really promising. If this is what the actual game is going to look like and play, they are really going to set a benchmark for other mobile games to come.

Not a first-person game

Now, it might not be a first person game as you would have expected, but it is going to be every bit of fun that we expect from a Hitman game. While the first person shooters were all about going on an assassination mission and wreaking havoc for your client, there was no strategizing as a usual assassin would do.

This is the void they are going to fill with the Hitman strategy based game. I don't think it's going to be a console-level experience, but considering the experience and goodwill of Square Enix, they are not going to put some drivel on Play Store, are they? 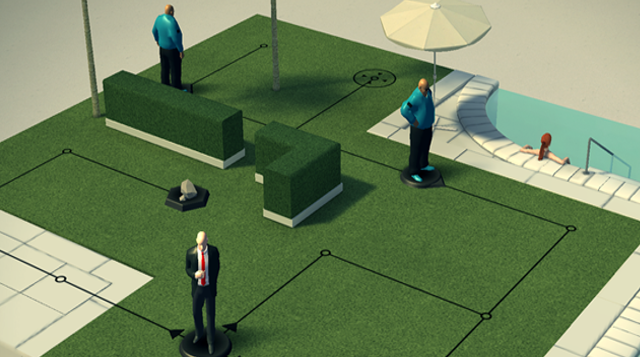 An idea turned into a game

No one would have been working on this game if a staff from the team wouldn't have proposed the idea to the executive officers. They were in the meeting room discussing the future of Square Enix while someone brought this game up. They stated that this game is going to do really well as it's based on one of the most established console franchises. Moreover, the risks are very low as it's not going to console much since its mobile game.

Tips, tricks and cheats to play Hitman: the mobile game

Don't expect a full-fledged game here. You are likely going to be really disappointed if you join in expecting a shooter or stealth game. While it still is stealth based assassination game in the core, the gameplay mechanics are not the same at all. It's a strategy based game now where you need to be more patient and vigilant to conquer your foes. You can't go all guns blazing anymore. You will need to find a specific route, a specific strategy and that too, in less than a couple of seconds or you'll be busted.

Remember that you'll have to stay disguised as one of them. If they suspect that you are not one of them, well you'll take bullet to the head and then all lights out. Now, he might not be a human, but he is still a machine that gets damaged. So when someone will shoot him, he will go down for sure.

You will have to keep hat n mind that he is not totally invincible. Yes, he can doge a bullet or two, and even take some to his metallic chest, but once a bullet pierces his brain, he is going to say goodbye. This not only applies to all the Hitman console games, but it's true for the turn based mobile game they are creating as well.

Overall preview of Hitman: The turn based game

There is no doubt that Square Enix has a lot to do right. They have a big giant obstacle ahead of them, and that is to be the best in what they do. The scarcity of resources they have is so overt. So heaver steps they are going to take from now on will have to land perfectly!