It's not a game that is worthy of its own individual review. However, its rise to a sudden fame which was helping the developer make more than $50,000 daily, compelled me to check out this game and find out what is so good about this game that is making people open their wallets in a flash? What is it which made the creator pull this game form the stores even though it was going so well for him financially? Was he a fool to do so? What was he afraid of? There are so many unanswered questions that I will try to answer here in this post.

Rise to a sudden fame

I bet even the creator of this game wouldn't have expected it when he was making a game. After all, pulling over more than $50,000 a day on a regular basis is not what everyone thinks of when making a game. He himself admitted that during an interview when he stated that he couldn't sleep for nights when he started making so much money all of a sudden.

I presume it would happen with everyone. Just imagine yourself as someone who wasn't financially stable and all of a sudden a causal game that you developed makes you $50000 a day with ease. How would you feel with so much money being stocked up in your bank account like it's a dream?

I reckon one would feel uneasy and restless in this situation. You might also feel the need to tighten up your security to avoid being looted. But would you do what this guy did? It perplexed him so much that he pulled the game away from stores. Yes, can you believe someone stopping a revenue stream of $50000 a day? This guy just did that. 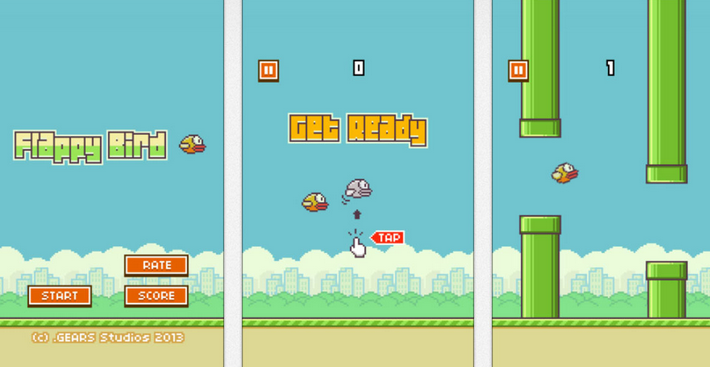 Why Flappy Bird was pulled out?

When he was interviewed by IGN later on, he revealed that he was feeling bad about making a game that is soaking up people's precious time. He conceded that he only wanted to make a game to be played causally for when you have some time. Instead, what happened is it became an addictive game for so many with reports of a kid murdering his mother for not letting him play that. He said that this incident is what caused him to pull the game away from stores. I don't know. For me, it's just like every other game out there striving to be perfect. But for others, it was like the only way to pass their idle time.

Now that it's gone, though, there is no way you can ever play that game again. But if you have downloaded the game already, well, you can have a crack as long as Apple doesn't decide to suspend it. So now the onus is upon them to do it right. I have heard the rumors that it's incredibly addictive and chaos would ensue if they do that. Huh, gamers are too lazy to cause a riot or even participate in any outgoing event. As much a badass they might be on Call Of Duty busting everyone on the go, when it comes to going out, many people avoid doing that. So these reports are just mere hoaxes. Nothing like that is going to happen.

Did you know that so many gamers were also sending death threats to the developer of Flappy Bird who reportedly pulled the game away from stores for no reason? I am not making it all up for you. He himself reported that he is being threatened and coerced into giving the access back to gamers. But he also stated that he is adamant on the decision he made and would support it till the last breath. So, there you go virtual assassins, you aren't going to get your fix anytime soon. He isn't afraid of these death threats you flood him with every day. You have to find some other alternative to this game which, not to mention, is so difficult.

The dearth of these kind of games is what caused panic among gamers in the first place. Had there been an abundance of these types of games, nobody would even care about that this game has to offer. But since this is the only deal you can get, people wanted to persuade the developer to allow the game to be downloaded again.

Granted, Flappy Bird was a game of its own caliber and it's difficult to find an alternative to it, but there are some games you can try that will give you the same feel. For one, you can try all the other Super Mario games.

And no, there are no clones of Flappy Bird right now as Apple is just rejecting all the apps with the name Flappy on it. So you might as well forget about that. The closest you will ever get to playing Flappy Bird is Super Mario Bros. It's not only a genuine game, but it is also far better than that. The only difference being, Flappy bird was a free to play game while Super Mario Bros. is not. You only have to pay one time and then you can enjoy the game for as long as you want. This feature single-handedly outstrips Flappy Bird in my opinion. Let's not even talk about other gameplay features that are far better implemented n Super Mario games.

Yes, these games are dime a dozen, but each and every one of the lot is a gem in itself. If you had a chance to try it out for yourself, you know what I am talking about. There is no game in over 20 Super Mario games that one can point out and say it's even mediocre. That's why it's the only game in the list I am recommending to you as an alternative of Flappy Bird. So you see, there is still a chance that Flappy Bird might reappear on the store, but that chance is so low.

If you like to find out more about the Flappy bird alternative game, you can check it out here. It's a Detailed review of Super Mario Bros which is the only alternative to Flappy Bird.