The game we have been waiting for so many months is finally starting to look promising. Now that the release date is looming around the corner, let's look at some of the intriguing aspects and learn some of the tips, tricks and cheats to play Evolve.

For years they didn't appear on screen. It seemed as if they are gone for good as they went under the wraps after delivering one of the best co-op games of all time – Left For Dead 2. Yes, I am talking about Turtle Rock Studio here. What, you don't remember the name? Well, I get it. I had almost forgotten them too. They haven't done anything after Left For Dead 2. But hey, they were not sitting idle for so many years.

While they didn't come out in public and announce t in advance, they quietly developed what is going to be one of the most exciting games on 2014. Yes it might look tiny and meal in front of games like Titalfall and Destiny looming around in corner, but when you consider that its game developed by less than 100 people you come into the real terms and respect these developers for their hard work. Let's talk about this game a bit more in detail. 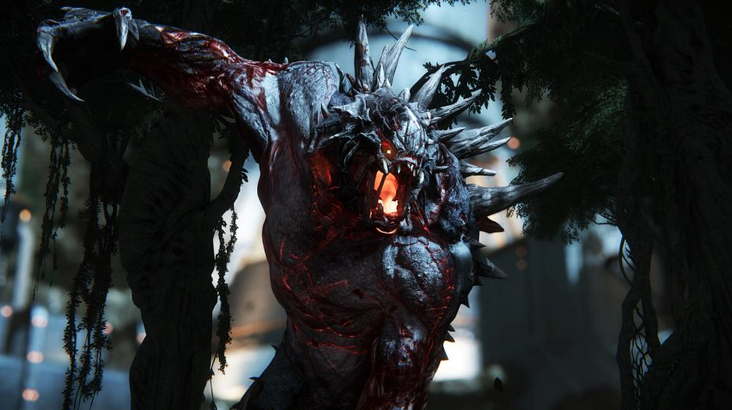 This is strictly going to be a cop-op and multiplayer game. There is strictly no single-player in it. For those hoping for a lore-focused game, you might as well have to exit from the back gate. Here is nothing like there. The lore based games is a thing of past now. Gone those days when developers used to put everything at stake for a good single player experience. It's not going to happen anymore as apparent from games like Titanfall, Destiny, The Division, The Crew and Evolve.

Why would the developers put everything at stake when they can gain so much from putting so little while staying close to consumers as they morph a game into something more meaningful from a measly concept? You see, it's going to cost significantly less, thus having no risks attached to it that is so prevalent in traditional model.

You see, I am not a proponent of any kind of gaming business. I am not saying that this type of gaming model is going to succeed or holds nay value in future, but for now, this is here the whole gaming industry seems to be heading. The buzz that some of these games are creating, are invite for developers to develop these kinds of games only while eschewing from only one time pay model. So you might as well say goodbye to it or stick to playing Skyrim forever. You are not going to get anything less or more than what is proposed here whether you are dismayed or exceedingly happy.

Free to play was nearly mulled over

What you should be thankful for is that this game is not one of those free-to play traps that are so prevalent these days. I for one, really loathe that model. But you'll be surprised to know that this model was nearly mulled over by Valve. They were almost going to do it until the developers said a no explicitly. They said that they are going to quit developing immediately if free-to-play model is forced upon it.

So ultimately, free to play model was shelved in favor of more sensible, pay to play model. I like the latter better than any other model as I have to not worry about paying anything else except the first $60. The game is mine as soon as I buy it. Nothing else can prevent or bother me while playing it. I couldn't be happier when I heard the news that they are not going to integrate this model. What's more surprising was that they managed to persuade the big publisher for the pay to play model. We all know how hard they are to convince. After all, we haven't seen a Half-Life game in 10 years despite all the fans pleading!

You wouldn't be troubled by seemingly difficult control mechanics if you ave played Call of Duty or Battlefield games already. It's really easy to learn, especially when you already have some experience under your belt as a first person shooter player. If you haven't played any of them, though, this game will take more than just couple of minutes for you to get the hang off everything. Everything from nimbly jumping over to one wall from other or double dashing in a titian might be a bit dizzying for you at first, but the game is designed in such a way that it would welcome you on every learning step instead of throwing you into predicaments or pitting you against more experienced players.

Evolve is a first person shooter

There are so many of them coming out this year. So much that we have already getting tired of it What else they have to offer other than running and gunning? Not much, as it turns out. You can't deny, though, that for all the hate, it's one of the most popular genres games that sells like hot cakes. Just look at all the COD and BF games for instance. They all do exceedingly well financially. Why? Because they are first person shooters and people just pounce on it on the first site.

Well, it seems that Turtle Rock studios have taken a leaf out of these game's book and decided to morph this game into the first person shooter structure. Granted, we have outgrown tired of it, but this game promises to be a whole different ball game when it actual comes out. Only time will tell what it's gonna do, but for now all we can say is that trailer looks really awesome.

No single player for you here

While the lack of single player still worries me a tad, the multiplayer filled with enthusiasm and innovation more than makes of for the void. I am not a proponent of multiplayer games, but all I can say is this looks and plays amazingly smooth. It's a breath of fresh year for a genre that has been stale for last couple of years. It scratched my itch for some frenetic first person shooters that I didn't know I ever had.

Let's hope that they manage to turn the tide in their favor and prove all the critiques wrong. I for one am pulling for this game. What about you? Are you excited for the impending launch this year?

If you like this game, you should definitely check out my impressions and review of Call of Duty.

Are days of single player games are over?