I know, I know. They shouldn't have gone for an MMO. They probably should have stuck to what was working for them. How could they not listen to what fans were coveting and clamoring for? It all seems really a perplexing situation. They decided to build a MMO game in Elder Scrolls universe even when we hear that Skyrim has still been going strong after 4 years of its launch. The last we heard, it had already crossed over 20 million units sold all across the regions. Heck, it's one of the bestselling PC games in Sweden and UK. So what was it that allured them to go for an MMO instead of building and developing another great SP immersive RPG? It would have, undoubtedly, sold more copies than it's predecessor. Just look at the phenomenal level of success Skyrim has achieved in recent past.

Well, to answer your question and soothe your salvaged wounds, let me start off by saying that the company who is developing Elder Scrolls MMO is the not the same company who made Skyrim. It was made by Bethesda while the company behind the loathed MMO is Zenimex, a parent company of Bethesda.

Secondly, it's more than likely that they are developing a successor for Skyrim already and there is a good chance that it's well on its way to a 2016 release! I know it looks like we have to wait a bit too much but this is how it has always been for Elder Scrolls franchise. We get a game every 5 years. So if we got one of them in 2011, it's more likely that another one will drop around 2016 or maybe 2017. Do you still remember the gap between Morrowind and Oblivion release? It was more than 7 years of excruciating wait! 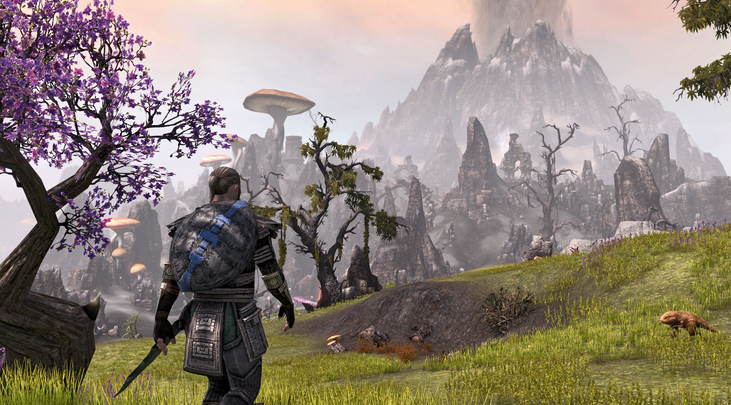 And if their job advertising is anything to go by, the next fallout game is also coming somewhere around 2015. A trailer or full-fledged gameplay footage is going to be shown at this year's E3 convention. So brace yourself for some awesomeness.
Anyways, here are top 5 reasons why I think ESO Online might as well not suck. We can always be optimistic when Bethesda is behind a project:

The trailer doesn't look so bad

Nah, not the initial gameplay leak. I am no talking about that. It looked horrendous, like Everquest and World of Warcraft's baby child. It looked like a WIP, and to be candid with you, it was at the begging of the project.

The latest gameplay footage and trailer they showcased, though, was more than what met the eye. The gameplay looked surprisingly similar to its single-player counterpart. What's more astonishing about this project was resemblance to Skyrim. It played so much like the single player game, unlike anything we had ever seen in MMOs before.

This is what gives us some hope that, just like trailers, the gameplay is going to be at least half as good as Skyrim ever was. Whatever the case maybe, we will have to wait till April to find out as its releasing in India in early summer.

Did you have a chance to participate in the beta? Did you play the game? I know a majority of people didn't get it in. Only the luckiest of people got the invites and I was one of them to get in first. What I experienced was an immersive, glittering world full of amazing quests. No, not your usual kill and fetch quests we have come to expect from an MMO, but the real immersive ones that we get in single player RPGs. This is what sets it apart from other MMOs out there. So if you are a fan of lore and story, then you ought to check it out. You are not going to return disappointed, unless of course you are a COD fan (had to crack a COD joke somewhere).

It's not your usual MMO

When they announced their plans for an MMO and the very first footage leaked, I had determined myself to never touch or even glance at it. But what ensued thereafter, was the pure work of art which had me pulling for them in a matter of couple of minutes. If you have played the beta, I am sure you will concur will me here. For all those who didn't, though, you will just have to take my words for it that it's every bit of meaningful and beautiful as they showcased in one of their CGI trailers.

The world is immersive

One of the main complaints of beta was the world is not as big as Skyrim, or even its predecessor, Oblivion which is obviously true considering it's an MMO. The server can only take so much load while assimilating tons of players in it. They have to balance each side so as to reach to appoint where everything is perfect. And this gameplay design is nothing less than perfect. Granted, the world is not gigantic like Skyrim, but it's vast enough to be dizzying for any newcomer. It's going to take more than half an hour for you to sail from one part to another in this game which is testament to the fact that this game is actually a beast in terms of size.

A lot of things to tinker with

There is nothing like end game here like it happens in single player games. You are supposed to keep playing a MMO until developers decide that it's time to shut it down. This is what a strong selling point of an MMO is. The longtime fan of this series would certainly want to let themselves lose in this world and peruse every book of it. Apart from staggering amount of books, there are more than 8 factions, and each section has a riveting story. So each time you take a new role and avatar, you will play this game from a different point of view. In other words, there are tons of content to play with and with the promise of new DLC at regular intervals, it's sure to keep the staunchest fans engaged for the rest of 2014!

Overall, it looks to be really exciting year which is crammed in with potential hits. Some of them are bound to get in our best games list section. So keep an eye out for that! Till then, enjoy playing the beta if you are lucky enough to get in, or just wait till the open beta kicks in. You know its coming!

By the way, util the beta kicks in, you can get your hands on the single player counterpart of this franchise. Why not try Skyrim for some time? Alos don't forget to check out the review of Skyrim.

Read Is Elder Scrolls Online worth buying on consoles?