The Walking Dead TV show is every bit of successful as the producers would have imagined, but can The Walking Dead game, repel the success and reap all the profits or will t be like Activation's FPS that made no sense at all? What's perplexing about that FPS that it didn't even care to introduce itself. How come we are in this zombie-dominated world all of a sudden? Why we have to go down a constricted path for no reason? The game just drops you in the middle of a town with endless zombies roaming around the city and looming around the corners. The sprawling city itself is a big feta achieved by Activision, but besides that the whole gameplay thingy was just a major disappointment.

If you were to tell me 2 years ago that there could actually be a good game based on a successful TV, show especially the zombie-infested show like The Walking Dead, I would scoffed off at you really hard. No, I am not a hypo critique, but all the facts indicate that there has never been any successful movie and game tie in ever in the 20 years history of video games. Defiance tried it with their post-apocalyptic take on the mediocre TV show, but the game turned out to be worse than what the state of the TV show currently is. Moreover, by looking at the stats of Defiance, we can presumably say that this show is already dead, and with the show, the game will also fade out with time. Core players like us are already out. Whoever is playing it is either a staunch fan of the TV shows or a highly optimistic gamer that one day things will be patched out by Tron Worlds, the creater of the pesky MMO game. 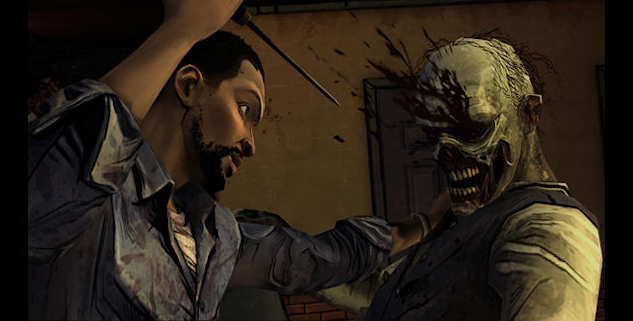 The state of tie-ins

Now you have a better idea as to how miserable the state of tie-ins actually are. It's worse than what it sounds. Look at the no- 1 TV show, Game Of Thrones for a moment. They tried to make a game out of it for two time. The first one was more Pragmatic and ingenious effort, a SP game produced by Deep Silver, which failed to rise to the occasion as they launched the game while it was only half-baked just to match the launch day of the TV show.

Nevertheless, you'd presume that they would learn from their mistake and avail the second chance given to them. Conversely, though, they did what was lease expected out of them. They produced a browser-based always online game, which was not like Game of Thrones at all. Needless to say, that game bombed even before it came out. Alright, I admit that I was one of the people to play this game, but I didn't knew that this game would be so disappointing lacking any real effort. The sole purpose of it's existence was to squeeze as much as they could from the loyal fans of the TV show by enticing them to play this game and spend their hard earned cash on virtual jewelries. The stigma they stapled on tie-in were not likely to be washed away for years for come, it it was not for lifesaver, The Walking Dead. I think most of the credit should go to creators, Telltale as they were the ones who probed this idea. They actually had the guts to approach the Walking Dead directory and pitch them their game. Moreover, what amazed everyone was they asked for money straightaway. And to everyone's amazement, they agreed to fund the game!

That was the stage when Walking Dead started morphing into much more than merely an idea. It was their pure luck, or a really convincing tongue that provided them with the required money to develop a game of a series we are talking about today. If it wasn't for them, The Walking Dead would still be just a comic book and a TV show. It would never have formed into something as amazing as the two seasons of The Walking Dead we already churned through in a flash!

Was the ending really disappointing

Some people including famous YouTube celebrities like Pewdie couldn't hold he emotions in when playing the last few moneys of Lee's life. It got me too as I wasn't left untouched by the story. I would go as far as to say that it felt like apart of me is dying when Lee was having a last conversation with his adopted Daugherty, Clem. It was one of the most emotionally heart-wrenching seen in the gaming history. What got me was the mere thought about losing a character I cared about, losing someone I would really love to see carry on his journey in season 2, even though I knew he would dies due to the zombie bite. His determination and persistence was what kept him alive for so long. He sailed Clem all the way to safety and handed over her to someone else for taking care before his last breath. One would just have to feel for how tough it must be for both to be apart from each other forever.

The little kid had already been through a lot. She has been through all thick and thin like losing her family in the apocalypse and almost getting killed in so many situations. She has seen so many people die before her little eyes that she doesn't care about being bitten anymore as it's apparent from her diary. She writes, "If dying is what we are living for, it's better to embrace is right now, than to run away from it. Death can run faster than we would, and he will catch up with us sooner rather than later. We all are gonna die, inching my mom." The quote is pretty overt It can only be written by someone who has matured, but has a wicked perspective of looking into things. She is the one who is tired of her dear ones die. An it's taking a toll on her gradually as she is becoming quite a lone world herself.

Lee was closest to a father figure she had after presumably her parents died in the massacre, and to lose him now when she needed him the most, must be traumatic for Clem. Many fans are polarized on the Lee's death at the end. Some say that he will come back from being dead as he was immune in the first place, while others who are not so optimistic about it, say that he is gone for good. I for one am with what seems most rational concussion to me. If you loved Lee, it's time to say him farewell as he ain't coming back from where he is gone, unless there is such a thing as revival.

Who knows, he might even come back against all the odds. We have seen TV shows attempt to pull off unreasonable things just of the sake of some high TRP ratings. But considering the impressiveness and sincerity of the show, the writers aren't prepping for a comeback.

Review of The Walking Dead - After

The Walking Dead Episode 2: Starved for Help - A review

Read this review of the game The Walking Dead Episode 2: Starved For Help and know how to play this game.

Review of The Walking Dead - After

The show that has been creating a stir on TV, is back people! And so am I with my usual satire and with an eye open to find even finest of plot loopholes to strip them of the fame they get for being a premier TV show that it is right now. Read on!

The Walking Dead Season 2 game review and cheats, tips and tricks to play

Are you looking for Walking Dead Season 2 review? Just played the first episode and ready to churn through the second one as well? Before you get your hands on the game, though, you should definitely check out this review.

How to play with ropes in Rope Escape game - Tips, tricks and review

Are you feeling difficulty in mastering Rope Escape game? Are you trying to score big but can't? There is nothing to worry about, as I am eager to help you! Here is the article which is perhaps a solution of your problems regarding the game. Read more!