I am riding an overly-crowded bus and someone asks me all of a sudden, you can shoot a gun right? Do you even know how to handle a gun mate? Oh shit, you don't? Here, take this pill and let me teach you everything. And within 5 minutes f that seen occurrence, I am a merciless assassin, blasting my way through the deserted place. They will come at you face begging you to shoot them, but f you want to play cat and mouse, they will maul you into pieces before the blink of an eye. So there cannot be any half-measures.

You have a gun loaded with what seems to be unlimited amount of ammo. You take several hits and about to die, yet you can revive against the odds. All you need to do is kill someone while you are on deathbed. If the above few words seems gibberish 2 you, let me warn you, all the following words you'll peruse will seem more like drivel as this is what Borderlands is all about. I just summed it u in few words, or at least tried to do so. It's huge, bigger than Borderlands 2 by quite a margin, and beastly at the same time. The amount of freedom given in this game as soon as you set your foot in Bandit-driven town, is quite dizzying for a new-adopting player who is just getting used to holding the husky gun handed over to him by the driver. 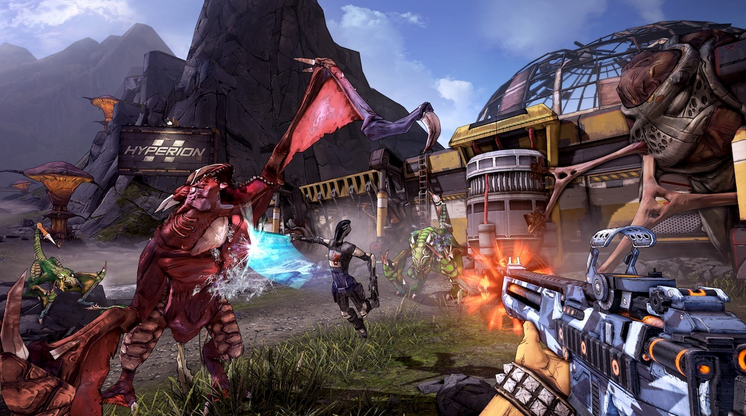 What I have always wondered is how do we get access to all these guns presumably bigger than out bodies. It's none of our concern, though, as we are here to do what we are assigned to do. Oh wait, why the hell we are here? Nobody knows that as you are just supposed to deboard the bus in the middle of nowhere to your own demise. Landing on a deserted place with nothing in sight for miles is what not a rational human being would do. That is something only a Borderland character could attempt and come out unscathed from the impending slaughter that ensues seconds after and lasts till you are out of there.

I want to stay though

As soon as you get out of the bus though, the visuals and graphics are going to disappoint you hugely, at least for a good half an hour, until you reach, Valkyrie, the Ringer town known for its sewers and merchants that would load you with guns in return of helping them get rid of snobs and bandits. While the gameplay was certainly fun from the begging, the interaction and story stuff was quite underwhelming including the lore of it. As much as the game tries to force you into it to get a feel and immerse yourself, you will get a feeling of characters being shoved up your throat.

You will be forced to interact with them and say nice words to them. If you aren't going to be persuasive and will choose to resort to being a maniac instead, congratulations, you can do so without any ramifications whatsoever. For a good hour or so, I played the nice guy, thus bereft myself of many privileges and load outs I could plunder for myself, only to find out that there is no incentive or at least an acknowledgement for being nice and playing the game it was meant to be.

I ain't a nice guy

What I didn't realize, however, that the game wasn't meant to be played as a nice guy at all. You play as one of them and you keep yourself aloof and away from all the fun you could have blasting through everyone and everything you see, whether they are a good or bad guy. The guy at village are still going to admire ya' for what you did to them. They don't care how you do it as long as you keep providing them what they require to survive. That's why sometimes this game felt like a surviving simulator instead of being a straight up shooter it was advertised as.

Let's talk about the heart of a game, graphics that is. The graphics, as I conceded above, are nowhere as good as you'd expect from a tripeA quality game. The way it was advertised with heavily invested trailers and ads everywhere on TV, it seemed like it's going to be the next big thing, but it was not the case.

While the gameplay is more fun than the first game offered, the graphics here are lacking a tad. I am not saying that it's the fault of cell-shaded mechanism. Heck, I really love some of the cell-shaded games like The Walking Dead and The Wolf Among us, but Borders lands is kind's different art. It's not the cell-shaded graphics that is the issue, it's the way it is perpetrated and poorly done. The animations, loadings are just out of place which constitute a major portion of the game in all the first-person shooters. If that portion is not captivating and rather obnoxious, who'd want to have a crack at it however fun the game is? 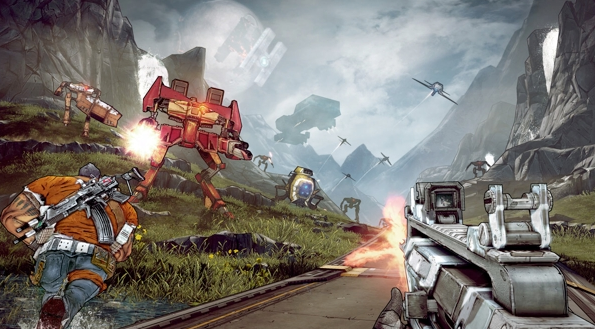 If you can ignore that part, though, the game is a pure blast. The game promises some real fun with multiplayer and co-op modes and does what it says on the box. While I am yet to try the multiplayer mode (who buys Borderlands for Multiplayer, seriously?), I am having a really good time with my friends on co-op mode.

Admittedly and perhaps ashamedly, I am a noob at game and would die at the begging every time if it wasn't for my new friends who are teaching my everything about co-op. They don't get frustrated even when I die initially on each stage, which is a testimony to the fact the multiplayer community is really mature and welcoming to new players. If you are a new there, don't pretend to be a veteran and you'll be tagged with a Newborn tag in the game. If you come across a veteran and they see your tag, they will either ignore you altogether or will try to kill you will their Pistol to score a bonus. If you can turn the tides against them, though, you will progress faster and inch closer to unlock new gears and guns for yourself.