Sony Xperia Z Ultra is the company's first Android device with a massive 6.44-inch Triluminos display. At 6.4-inches, it is one of the largest Android device now available in the market. This device not only offers the biggest screen among the Z series, but it also powered by the latest Snapdragon 800 processor. Of course like its predecessor, Sony Xperia Z, it is also dust resistant and waterproof. However, a gorgeous display along with powerful processor doesn't guarantee it being a great device. According to the company, in order to attain desired slim profile they had to do certain compromises, it means some of the hardware features were intentionally ditched from the device. Obviously, this may seriously affect the overall performance of the device. Lets find out its features, pros and cons.

Sony Xperia Ultra's build is superb, and it features rectangular design with the dimension of 179.4 x 92.2 x 6.5 mm. At just 6.50mm thickness, the Ultra is sleek, and of course it is one of the thinnest full-HD smartphone now available in the market. Though the device is very thin at only 6.5 mm, it appears to be sturdy. At 179mm, or an unbelievable 7.05-inches length, even people who have large hands will not be able to accommodate the length of the device in single hand. Being a waterproof device, even you browsing Internet in rain or watching videos in the bath, it is okay with the Z Ultra. 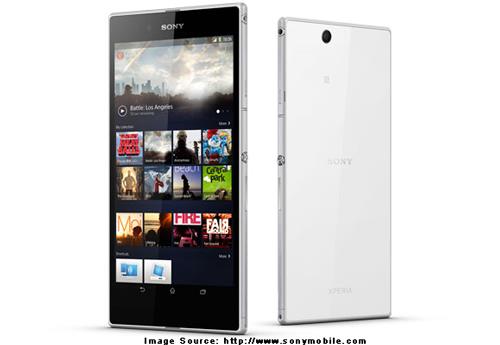 Its display keeps working even the device is under water though definitely the touch-screen doesn't function when it is submerged. The device is come up with plastic body built around a metallic frame, and it gives a premium feel while holding the handset. On the front of the Z Ultra dominates by 6.44-inch Triluminos display. Coming to the left edge of the device, there is a dock connector in the center and a Micro USB port positioned towards the top. There is an ergonomically installed milled power button, which is seen first on the Sony Xperia Z, and volume rocker on the side alongside a micro-SIM slot and microSD card slot on the right edge. Due to the fact that Z Ultra is a waterproof device, Micro-SIM and microSD card slots and the Micro-USB port are secured by the flaps. Though, the 3.5mm headphone jack is not protected by flap, which is protected inside. While the device's slim profile makes the power button stick out visually, it also decreases the target place of the button. The back and front of the device is very glossy and bring in smudges extremely easily. The glass back of the Z Ultra is a lot like the Sony Xperia Z1 smartphone and it makes the device feel stylish and premium. Flip the device back there you can see an 8MP rear shooter without any LED flash. Also, there is a mono speaker positioned down at the bottom of the device alongside a lanyard loop. The battery compartment is totally sealed off, that means there's absolutely no way of swapping it out.

The Z Ultra features a 6.44-inch Triluminos display, which uses exactly the same panel technology used in company's 2013 BRAVIA Televisions, full-HD display. The outcome of this is incredibly bright and vibrant picture with really good viewing angles, whereas the Xperia Z phone had to face the severe issue with viewing angles The Z Ultra's non-Pen tile screen features 1,920 x 1,080 resolutions with the pixel density of 344ppi, which means you can't see any pixilation at all. This doesn't sound great if you compare it with Xperia Z's 441ppi pixel density. Even though the Z Ultra's LCD panel is way brighter and delivers a lot more natural colors than the Xperia Z, but of course those colors are less saturated than you see in AMOLED displays. The outdoor visibility of the Z Ultra's display panel is about average, at times you may wish the brightness could be much better, even when the display's brightness at its maximum. Despite the fact that Z Ultra doesn't offer a stylus, the display can recognize taps from a stylus, or even from a pencil or pen, if you like to use your phone in that way. Undoubtedly, Z Ultra got a stunning display.

Sony has introduced 13 Mega-pixel Camera Sensor in its recent Xperia device, but this one comes with 8 Mega-pixel camera sensor and of course it's a shame Sony left out LED flash in this device. Though, Z Ultra phones still features a decent camera with a clean UI and a advanced auto setting known as Superior Auto. The captured images turn out good on the device's display or while viewing it at the default zoom level, but you may notice loss of details while you zooming in. The company claims the camera sensor used in Z Ultra works well in low light condition, but based on testing, the results aren't too pretty. You may find a lot of color noise in captured indoor images. However, its camera still manages to capture better shots than most other phone's camera in indoor and low light situations. Though, you can't even compare it with the low light and indoor performance of camera sensor seen in Nokia Lumia 1020 or iPhone 5S. The Ultra incorporates a sophisticated camera app, with presets and settings for almost every possible scenario. The list of options available is exactly the similar to the company's previous Z devices, the Xperia Z and Xperia ZL. It is also capable to do high definition video recording, with the option to zoom out and zoom in. The microphone used in this device is quite sensitive, so capturing distant sounds during recording outdoors is not a big issue.

Out of the box, the device comes with Android Version 4.2.2 Jelly Bean, although the company has plans to update the Android Version in near future. The Ultra comes with the company's own customized user interface, and customized a lot of stock apps as well as including several Sony branded apps. Just like other Xperia handsets, for Music you have WALKMAN, Movies and Album apps for media use, all with much more functionality from Sony. Other pre-loaded apps in Z Ultra, include Socialife, TrackID, GPS based navigation named as Wisepilot for XPERIA, File Commander, McAfee Security, PicsArt, Foneclay, Smart Connect, Sony's anti-theft solution named as X-Alert, Voice Dialer, Convertor, Word Search, X4 Video Player (which allows you to play four videos simultaneously), Music Unlimited, Video unlimited and Drag&Share. And there is some popular third-party apps, including Facebook, YouTube, Chrome, WhatsApp, LinkedIn and Box are also available. Luckily, majority of these apps can be turn off and about half can be uninstalled if it appears to be useless. You can also find out a few stock features left out, such as Photo Sphere and quick-notifications panel and Photo Sphere. The company has, however, managed to improve some existing features, like small apps.

Sony Xperia Z Ultra is packed by a 2.2GHz quad-core Krait 400Qualcomm Snapdragon 800 (MSM8974) processor and 2GB of RAM along with Adreno 330 for better graphic processing. It has 16GB of internal storage memory as well as the support for expanding the storage memory up to 64GB via microSD card slot. Also, it includes usual connectivity options such as Bluetooth V4.0, Wi-Fi Direct, NFC, GPS, USB OTG and GLONASS.

Talking about performance, it's one of the fastest device I've come across, everything work like a charm. For instance, opening apps, switching between apps, multi-tasking, watching HD videos, playing high-end games, everything is butter smooth in this device. Thanks to big screen, browsing the Web was such a awesome experience, and also it is capable to render heavy-duty websites instantly. On the sound front, the speaker volume is too weak and not loud, though the headphone quality is quite okay. The company managed to include some sound enhancement features such as ClearAudio+, xLOUD, Clear Phase, Clear Stereo and Dynamic Normaliser, however, it didn't make so much difference in sound came out through speaker. Coming to the Call quality, it offers average performance in receiving and making voice calls. The ear piece also has an issue, as the caller's voice sounds thin and muffled. It is quite hard to hear the caller's voice in noisy environment even at the full volume.

The Z Ultra comes with a decent battery. It has a 3000mAh Li-ion non-removable battery. Speaking of battery backup, even with the big display and powerful quad-core processor, this phone got stamina to stand up to over a day with moderate usage. There is a Sony's Special Battery stamina mode available to increase the battery life, this helps to slow down the CPU performance when you are not using the device.

Considering the performance and build quality, Sony Xperia Z Ultra is a beast. However, it is too hefty for some people and almost impossible to operate the device with one hand. Of course, it does have a stunning Triluminos panel, and one of the fastest chipsets ever installed to a device makes it great for gaming and entertainment. The camera quality could be much better, and it's a shame the company left out LED flash. The speaker performance is so awful, due to the fact that speaker volume too weak even at the maximum volume. With the price tag of Rs. 35,999, the phone must have at least 32GB inbuilt memory, instead only 16GB available. And for this price tag, I expected much more than just a big screen and waterproofing.