Gionee is one of the Chinese smartphone model now present in Indian market, which is becoming famous day-to-day. Gionee Elife E3 was the company's first Android smartphone in Elife series, which is still a good phone with impressive hardware specs. After the success of Gionee Elife E3, the company recently launched second phone in the Elife series, which is named as Gionee Elife E5. It comes with a premium feel and look while it gives a outstanding set of hardware specifications as well. It is packed with 1.5GHz quad core MediaTek processor Android, 1GB of RAM and 16GB internal storage memory. The main attraction of the device is its ultra slim body with 6.85mm body thickness and the 4.8 inch Super AMOLED screen. Lets find out its new features, pros and cons of this device. 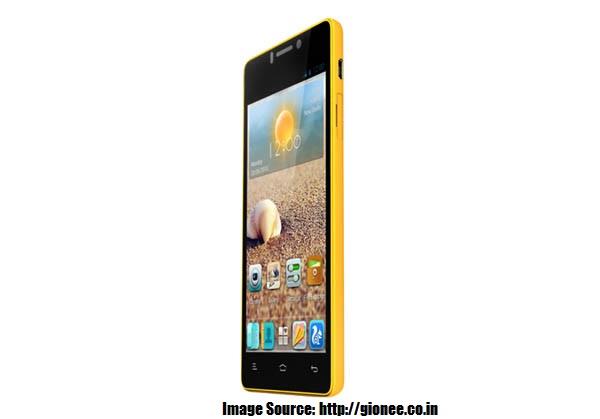 Gionee Elife E5 is even sleeker and superior looking smartphone with a unibody design. It comes enclosed in premium plastic unibody along with a matte finishing that continues along its sides as well, and is available in white, yellow and Black. The device has the dimension of 137.00 x 69.00 x 6.85 mm and weighs 133g. On the front of the device, it got a 4.8 inch Super AMOLED display. Down below the display three different capacitive touch buttons are provided for Menu, Home and Back, but don't offer haptic feedback. Coming to the sides of the device, on the top there is a 3.5mm audio jack, steel finished power button and volume rockers on the left and flap-covered micro SIM slot and micro USB on the right side. By placing all functional keys on the device's left side, making it a tad tough for right-handed users. Flip the handset to the back of the device, there you can see a 8-megapixel rear camera, encircled by a chrome ring and followed by an LED flash. There is a secondary microphone placed above the camera lens. Moving to the center of the device you'll find a Gionee branding, and tiny holes revealing the position of the speaker along with a DTS logo near the bottom. As mentioned the device is sealed, so there is no way to open up the device's back cover.

Gionee Elife E5 features a 4.8-inch Super AMOLED (Active Matrix Organic LED) by giving a pixel density of 306ppi makes visuals superb with no pixilation at all. As this device offers an AMOLED display, means it has got a brighter display panel and incredible viewing angles. So you don't need to face much issue using the device under direct sunlight. The display has good color vibrancy as well as good color contrast, which makes it great for playing games, watching images and videos and so on. The display resolution supported by the handset is 720 x 1280 pixels at 4.8 inches, of course, making it well suited for playing HD games as well as viewing HD movies. The black levels and the color reproduction are great and the picture quality given by the handset's display is vibrant and sharp. But the display is a tad shiny and it is highly vulnerable to finger print. So better you use a quality screen guard on the display to get rid of too much finger print marks. In this device, the company used Corning Gorilla Glass 2 protection on the display, means there will be no possibility of getting scratches and smudges on the display. Touch sensitivity is also not an issue in this device. Overall, this device got really impressive display.

Elife E5 incorporates an 8MP rear shooter at the back with BSI sensor, and a powerful LED flash for low light conditions. Its back camera offers great color variance and1080p Full HD video recording at 30fps as well. The front camera features 5 MP Sensor with fixed focus, which allows you to do HD video chat and take really good self portraits with adequate light. The 8MP rear camera enables you to take real decent portraits in outdoor with macro shots supported and in low light conditions the picture quality is good enough though it is not the best. The LED flash is useful in low-light conditions but it is only effective for very near objects. The auto focus is somewhat slower here and that might be a difficulty in capturing images quickly, producing unclear images especially at higher shutter speed. Overall, Elife E5's camera can deliver good output in both indoor and outdoor modes. The camera UI is quite simple, but it is a bit lag for using. If you dive into the camera settings, there you can find a quite a few features, including a set of frames you can pick from and apply just before you go for a shot. Then, there are a lot of features like various scene modes, color effects, Capture modes (Normal, Panorama, MAV, Eraser, Face beauty, Best face, EV bracket shot and Best shot), capture Actions ( Smile shot, Gesture Shot, Touch shot). Furthermore, Elife E5's camera features continuous shot, zero shutter delay, and have options to modify saturation, brightness, contrast, exposure and ISO.

It operates on Android 4.2.1 JellyBean Operating System with company's own custom interface that offers skinned icons, animated lock screens and an app drawer with folder support. In addition, you have the ability to add more number of home screens to accommodate more stuff. There is also number of home screen transition effects to pick from. Even you can customize lock screens, which have multi window interface, to get quick access to apps and other utilities. Interestingly, you can set different wallpapers for the app drawer and home screen. In order to save the power, the company offers a customizable power saver mode alongside a scheduled Power on/ Power off option. Another useful addition is the addition of a scheduled airplane mode option, which enables you to switch the device to airplane mode at scheduled timings. There are several pre-installed apps as well, and that include apps like WhatsApp, UC Browser, Du Battery Saver, NQ Mobile Security and Kingsoft Office, along with a couple of games such as Wonder Zoo and Ashpalt 6. There is also an App Manager that includes a built-in cache killer, process killer, boot optimizer to increase the speed of booting. The handset features OTA(Over the Air) update system, which enables the delivery of updates much faster. The overall experience with device is good and the hopes the company will bring out more update in near future.

The device is powered by 1.5 GHz MediaTek 6589T quad-core processor along with 1GB of RAM and PowerVR SGX 544MP2 GPU for better graphics processing. Also it comes with 16GB internal storage memory, out of which only 11GB storage memory is available for user's purposes. Unfortunately, no microSD card slot is available in this device, means you can't expand the storage memory. The other usual connectivity options such as Bluetooth, A-GPS, and Wi-Fi Direct are there, though DLNA or NFC is not included. You can't find any performance related problems in the device. Thanks to quad-core processor, opening apps and switching between apps is not an issue. It can play HD videos both at 1080p and 720p without any lag. Gaming on this device was great but some graphic intensive HD games, such as Nova 3, Modern Combat 4, were not so smooth. However, it managed to run majority high-end games. On the sound front, the device's speaker and ear piece is quite ok and the microphone is also clear and loud. The call performance of this handset is great too and calls are made and received without any problem even in low signal areas.

The device is loaded with a 2000 mAh battery, which is outstanding. However, based on testing, this device's battery offer good battery backup. In order to increase the battery backup, the company has installed several apps in this phone. By enabling the System Power Saving Mode, you may get around 1 - 2 days of battery backup, which is excellent in case of Android devices. Furthermore, Power Saving Mode helps to reduce the device's temperature by limiting the CPU performance, but you may need to turn off the Power Saving Mode in order to run HD Games and HD videos. Also, by enabling this mode automatically turn off Wi-Fi, Bluetooth, and Auto Sync when the display is off. Overall, this Smartphone got an impressive battery along with powerful Power Saving features, and it easily last for almost two days with moderate usage.

Gionee Elife E5 is a beautifully designed Android device with excellent build quality, slimmer body, and beautiful Super AMOLED display. The device also comes with powerful and faster quad-core processor along with better battery life. It operates on a highly customized Android 4.2 version, which is very smooth and easy to operate. Even if the camera quality is not the best, it still manages to deliver good shots. Sadly, the device doesn't offer a microSD card slot which is one of the big downside of the device. With Rs. 17,000 price tag it appears to be quite costly as there are several alternatives already available out there in this price range. If you prefer to buy a device with better display, design and battery life, then you can go for it. But if you still looking for a device with better camera quality and expandable storage memory (MicroSD Card slot available), then better consider other alternatives available in this price range.