There are very few games on Google plus that are designed for hardcore gamers and that's simply because very few developers want to take the chance to go ahead in this direction. However the field is not untouched and Kabam has already made efforts in the past to fill in this void with games like Starcraft and Command and Conquer and sometime back the latest effort by Kabam in this direction was Global Warfare. Though the game is not much different from the previously released game platforms but the greater emphasis on multiplayer coordination and player versus player combat is primarily aimed at hardcore gamers. But will all this be enough to make Google plus a attractive online gaming platform for Google plus gamers. 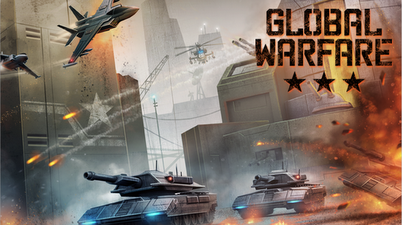 It has the general post-apocalyptic theme where you just have the task to garner more firepower by rebuilding a city that was earlier destroyed by bombs. You get six days to develop your city, get latest technology and upgrade your city to make it strong enough to defend itself against any attack as well as develop a formidable army to attack other cities. The other players are free to do so to you too. Obviously the biggest losers will be those who did not spend enough time improving their cities.

No need to mention that it will be extremely difficult to proceed much farther without any help from outside. This is very common is multiplayer games by Kabam. There is a heavy emphasis in Kabam to play in groups with even a chat window present specifically to talk to other players. Global Warfare's strength lies in the possibility to make alliances and use it for both defense and for making raids at enemy places. There are some objectives which are possible to achieve only with assistance from friends. This is an addition which makes Global Warfare better than the other similar games previously released by Kabam.

Only if the player really had a hand in the actual fight in Global Warfare! All you do in your fight is select a general and the army strength and wait for the news whether they won or lost. You don't even get to see the fight. No strategy making, no real time fights- all this I feel defeats the purpose of the game which was to attract hardcore gamers to Google plus games. It is impossible to proceed much farther in this game alone so forming alliances should be your priority.

There are a whole lot of bugs in Global Warfare in Google plus. The game is sometimes is not saved properly and when you log in again you find all your advanced cities gone as well you lose all your items. We even found our alliances contact gone and the leveling back to basic. It does not stop here- I faced problems in appointing generals and sometimes the games just freezes up when I send or receive virtual gifts in the game. However we found these bugs in early start of Google plus and now most of the bugs have been resolved- at least the ones I mentioned above are no longer there. Now you can play the game comfortably and make microtransactions if you want.

Though the game has been unsuccessful to attract the prime focus of Kabam- the hardcore gamers but the game is overall a good try. Those bored by the ancient or fantasy settings will heave a sigh of relief with the post apocalyptic theme but those who are already familiar with Kabam's previous games will not find much new here except some tweaks to crafting and battles. Global Warfare however definitely gives hope that Kabam will work in future for more interactive war games where player will play a much larger part during the battle.

Read Google plus: Dragons of Atlantis review, gameplay and tips to play

Everyone enjoys playing games on Facebook. There are thousands of games available on various genres such as action, stimulation, adventure, sports, strategy, etc. But all of them aren't that interesting and fun to play. So here we have picked the top 10 best and most popular games to play on Facebook in 2013 and have made a list of them making it easier for game lovers to choose the games they like with ease.

Read the review of the iPhone and iPad game Virtual Villagers Origin and know the pros and cons of the game. Read what all is interesting in this game and the tips and tricks to play Virtual Villages Origin on your iOS devices. Read all about this game in this article