Nowadays we can see a lot of entry level, mid ranged, premium Android, iOS, Windows smart phone's entering into the market. Each one bears its own key features and specifications. So if you want to buy an entry level, mid ranged, or premium smart phone from Android, iOS, Windows platforms because of any specific specs then you have to research it very deeply and carefully. In this article I am going to conduct a deep research on the specs of Samsung Galaxy Note 3 an Android device from Samsung which is perfect for those who are looking for a high end premium Android device with latest Kit Kat version and a good RAM, internal storage space as well as high grade processors, chip set, GPU, sensors etc and it's opponent is Nokia Lumia 1020, which is well know in the market because of it's 41 mega pixel rear camera, 2 GB RAM, and display features like Corning Gorilla Glass 3, Pure Motion HD+ClearBlack display and runs on the Microsoft Windows Phone 8, which is upgradable to WP8 Black. 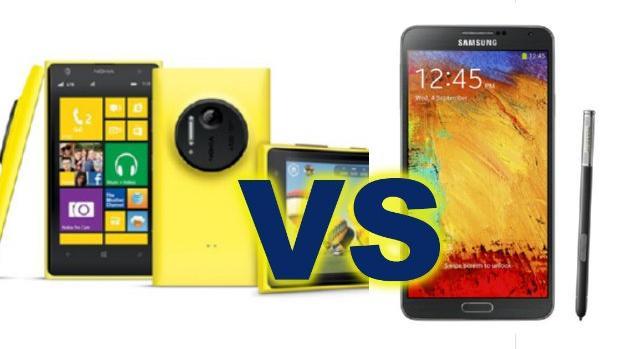 Now we can conduct a journey through each of the key specs of both these device to find out which one is your dream smart phone. Each these smart phones goals in different specs and provides a different uses experience. In the following segments you can find the review and comparison each of its design and display attraction, processor and operating system performance, camera and connectivity specs, memory and battery capacity, price and availability information's.

Winner: When we compare the design and display of both these devices, both are performing very well. But in my opinion Samsung Galaxy Note 3 is the winner of this segment, because of its 5.7 inch display and better display resolution which is capable to overcome the threat raised by Nokia Lumia 1020 in its size and dimension.

Both these smart phones run on the latest operating system from its respective platforms Android and Windows. They are also capable to perform the upcoming up gradations. Galaxy Note 3 runs on Android 4.3 Jelly Bean version and which can be upgradable to v4.4.2 KitKat. In case of Lumia 1020, it runs on Microsoft Windows Phone 8, and upgradable to WP8 Black. Here I can't claim any of these devices as a winner because these are the latest from their operating platforms. When we compare the processor, chip set, GPU etc, Samsung Galaxy Note has a Quad-core 2.3 GHz Krait 400 / Quad-core 1.9 GHz Cortex-A15 & quad-core 1.3 GHz Cortex-A7 processor, Qualcomm Snapdragon 800 / Exynos 5 Octa 5420 chip set and Adreno 330 / Mali-T628 MP6 GPU. On the other hand Nokia Lumia 1020 has a Dual-core 1.5 GHz Krait processor, a Qualcomm MSM8960 Snapdragon chip set and Adreno 225 GPU. Galaxy Note 3 is bundled with a couple of sensors such as accelerometer, gyro, proximity, compass, barometer, temperature, humidity, gesture, where as Nokia Lumia 1020 lacks temperature, humidity, gesture sensors.
Winner : Here we can easily find out who is the winner. Yes, its Samsung Galaxy Note 3 because of its Quad core processor cloaked at 2.3GHz, Qualcomm Snapdragon 800 chip set, Adreno 330 and a bundle of sensors.

Here we don't need any review for the camera specs. Because we all know that Lumia 1020 is the winner Because of its 41 mega pixel Carl Zeiss rear camera. However we can just take a journey for a detailed camera specs. I already mentioned that Lumia 1020 is the winner, but Galaxy Note 3 has a good 13 mega pixel camera which is available in mid-ranged, premium smart phones. This auto focus camera is supported by LED flash for capturing pictures and shooting videos during low light conditions. Feature such as dual Shot, Simultaneous HD video and image recording, geo-tagging, touch focus, face and smile detection, image stabilization, panorama, HDR, will provide a great photographic experience in this Android device. The 2 mega pixel front camera is much better for video calling. Any how it's not going to be a rival for Lumia 1020. The 41 mega pixel (38MP effective) Carl Zeiss optics, optical image stabilization, auto/manual focus rear camera gives a picture resolution of 7152 x 5368 pixels. It's equipped with a Xenon & LED flash for a better photographic experience during night or low light condition. Feature like 1.12 µm pixel size, Preview technology, geo-tagging, face detection, dual capture, panorama etc are bundled with this camera. Although the 1.2 mega pixel front camera is not at all perfect when we compare with the front cam of Galaxy Note 3.

When we talk about the connectivity and data options of these devices we can find that these two devices supports 4G network as well as equipped with GPRS, EDGE, Wi-Fi, Dual came DLNA, Wi-Fi hot spot, Bluetooth and GPS with A-GPS support and GLONASS. In Samsung Galaxy Note 3 it is already equipped with a v4.0 Bluetooth where as Lumia 1020 need a WP8 Black update to receive this version. Note 3 are also provided with one Infrared port too.

Winner : Without any doubt we can say that Samsung Galaxy Note 3 is the winner. It has a good RAM, internal storage support, expandable storage capacity, a high performance offering battery with a good standby and talk time.

If you are looking for a high performance premium smart phone, then in my opinion goes for Samsung Galaxy Note 3. It exhibits good specs and feature than Nokia Lumia 1020 except its 41 mega pixel rear camera. However Galaxy Note 3 is equipped with a 13 mega pixel camera which is outstanding for good quality pictures. In some other reviews I found that it is more preferable to go for some DSLR cameras instead of Lumia 1020. So think twice before going for Nokia Lumia 1020.