After a huge struggle and launch of a hand pick user friendly entry level Windows smart phones in the market Nokia once again proved that they are the best competitor for Android devices. The launch of few user friendly devices helps Nokia as well as Windows smart phones from a huge crash. When we talk about those devices The Nokia Lumia 520 an entry level Windows Phone from Nokia is a device that we can't avoid. This phone made killer sales across the globe and revealed a new face of Windows smart phones to the world. Recently Nokia released its younger brother The Nokia Lumia 525 with a few changes in the hardware. Just take a look here and find out its specs, features, price and how it differs in hardware when compare with Lumia 520. 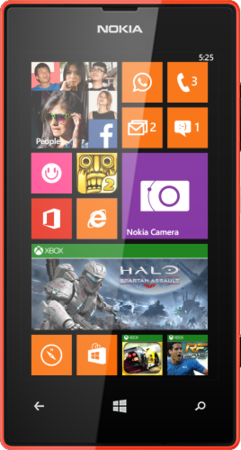 Design and Display of Nokia Lumia 525

Like I mentioned above Lumia 525 is only an upgraded version of Lumia 520 and it doesn't have any big changes from his elder. However a new design is given for Lumia 525 rear portion, which is a copy of 720. Its compact size is very helpful to hold the device and the build quality is also good. It weighs about 124g and has a dimension of 119.9 x 64 x 9.9mm which is same as Lumia 520.
There is no change its display too. The 4.0" IPS LCD capacitive touch screen carries a resolution of 480 x 800 pixels and a pixel density of 233ppi. This muli touch display is protected with the help of scratch-resistant glass.

In the operating system Nokia made few changes that we can't call as a change. Lumia 520 launched with Microsoft Windows Phone 8 which can be upgraded to Windows Phone 8 Black. But in Lumia 525 they launched this device with Microsoft Windows Phone 8 Black. Other specs like Qualcomm MSM8227 Chip set, dual-core 1 GHz processor, Adriano 305 GPU, and sensors such as accelerometer and proximity are common on both devices. The availability of GPS with A-GPS support and GLONASS is also a key feature of both these WP 8 devices.

The main hardware change made in Lumia 525 is its 1GB RAM. The previous one Lumia 520 only has a 512 MB RAM which is deficient for the up coming apps as well as for a good uses experience. I think this change in hardware will bring more killer sales for Lumia 525. The Windows Phone lovers are very excited with this device as well as its RAM. The 8GB internal storage space and expandable storage space up to 64GB are also plays a great role in this Windows Phone.
The battery is the old one Li-Ion 1430 mAh which is used for Lumia 520. It can provide a standby up to 336 hours in 2G and 3G networks and talk time up to 17 hours in 2G networks and up to 10 hours 40 minutes in 3G networks. We are expecting a 48 hours music play time too.

Price and Availability of Lumia 525

Nokia Lumia 525 carries a price tag of Rs. 10,399 in India and different online shopping websites are providing this device for different rates. The best deal available for Lumia 525 is Rs. 9,999 which is offered by Saholic. Nokia Lumia 520 is also released on this price range and now it's available for a price below Rs. 8,000.

Lumia 525 is a perfect device for those who are looking for an entry level Windows Phone. It's up gradation from 512 MB RAM to 1 GB RAM is the key feature of Lumia 525. The improved RAM will be more comfortable for users. The only negative point in this device is its lack of front camera. Other wise it's a perfect one. In my opinion if you wait for 2-3 months you can buy this device much cheaply.

Are you looking for a review of Nokia Lumia 525? Here you can read detailed review of Nokia's new entry level Windows Smartphone, the Lumia 525, which offers a quality package, with decent battery life and performance.