Whenever I have tried a new game of Kabam I hardly feel the excitement of playing a new game because the games are in reality not much different from each other. Just a few tweak her and a change in theme there and Kabam would come out with a new game. Same is the case with Edge of the world which is a sci-fi version of Global Warfare. However there is much improvement in the combat mode which makes the game much more engaging. 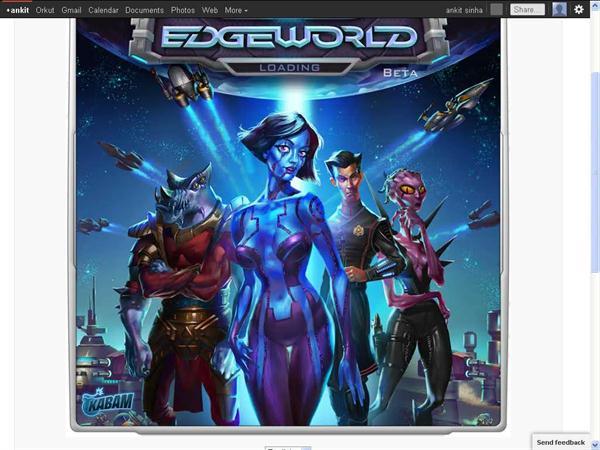 EdgeWorld happens on an alien land where each one seems to have a small piece of land and you are the latest one to arrive. No two neighbors seem to get along here and defense and offense are all that you need to survive. In the start you get a square piece of land as a base which is in complete wilderness until you start managing and building it with some latest technologies. EdgeWorld is filled with technology with research labs, defensive turrets, barracks for training new soldiers to equipment for producing mines and running refineries. Since everyone is here out to fight it is necessary to keep your defenses strong.

Most of the tasks are similar to other Kabam games and games proceed in the similar manner. You train your troops, collect resources and build buildings for performing various tasks like training your troops. As all these tasks take some actual time to perform so in the start you don't really have much to do. But you once build a strong base you find a lot of things worth to do like attacking other bases to plunder resources for your own base. In the start you are limited to computer controlled bases, but after sometime you can start attacking other player. Other players can then attack you too.

In Edgeworld on Google plus you don't do any actual combat, you just need to strategically place your army to make your defense better than the attacking force. How and where you place your defensive turrets will decide if the opponent is able to defeat you or not.

In offense however you are not just limited to sending the troops and then waiting for their return with the news of victory or defeat. You cannot send a scout at the enemy location to determine the enemy defense strategy and then you can decide if it worth to attack another base or not. You take the place of general in your army and decide how and where to deploy your soldiers for a successful offensive. Also in Edgeworld on Google plus you will be able to watch the live battle unfold in front of you.

Therefore you need to make a nice balance between strengthening your defenses while improving the might of your army to attack other bases.

The graphics are beautiful with detailed images just like most of the Kabam games. Even the menus have been nicely optimized to look good with the slick sci-fi games. There is animation on some buildings too all which makes it look more than a Google plus game.

Although Edgeworld is highly similar to other Kabam games but involving us with the combat even if it is just watching from above is a good addition. If most of the Google plus games graphics don't really impress you, especially of other sci-fi combat games then Edgeworld is here to impress you.

Read Google plus: Dragons of Atlantis review, gameplay and tips to play