Sometime back Electronic Arts' EA2D studios asked why no one ever made a turn based RPG for Facebook. And so they went ahead and made a turn based RPG themselves and now the offspring of this hardwork is Dragon Age: Legends which has been included in the Google plus games. This game development and its consecutive hype could be brushed aside if not for the fact that there is quite an amount of complexity in the game to keep your glued especially if you have a lot of friends on Google plus. 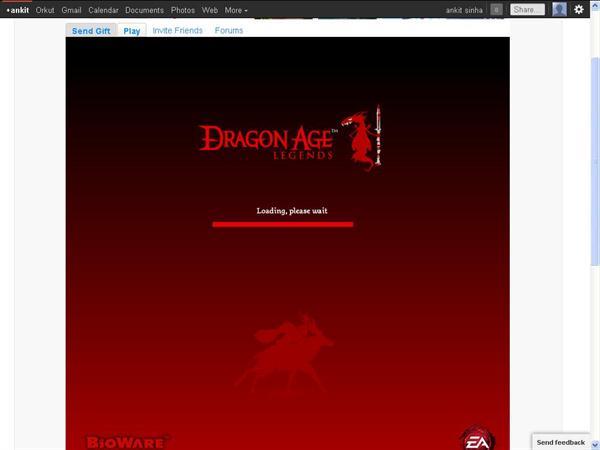 Within a few minutes of playing you get to know the richness of the Legends and the small innovations that have been done in it. EA2D is so impressed by this result of their endeavor that they have taken to call it the "first real game of social networks".

Of course this game is not as good as traditional PSP games but for a social network it is difficult to deny that this game is interesting. The high fantasy game starts off with a invigorating animated cinematic which is definitely for small kids (no pun intended). After the cinematic you get to customize your character which can be a warrior, a rogue or a mage depending with which character you want to play. Your enemy is a dark malevolent horde formally called the darkspawn.

It does not take long after that you are face to face in battle with monsters and grabbing loot with the help of NPCs or with your Google plus friends. The fighting is turn based like old games of Final Fantasy and Dragon Warrior. This mean that first you and all players of your team get a chance to attack and then the enemy. As you proceed to higher levels you get more powerful capabilities and attacks like ability to heal, block attacks and obliterate multiple enemies. As for integrating it in a social network you can call in two or more friends in the fights within very few hours and use the capabilities to the full extent even if they are on the basic level.

This is a very big advantage since the game gets very difficult to proceed alone after a certain level. It is almost impossible to make ahead alone and you will have to depend on more expert friends or large number of friends to help you proceed to higher levels. If you are short on friends on Google plus then you might as well skip this game otherwise you will just end up playing small snippets of the Dragon Age: Legends time and again. Except for the fights you can also build and name you castle complete with servants which serve you, make bombs and potions to help you in fights. The castles too have been integrated to social networks where you can visit your friend's castle once in a while and grab some gold from the chests.

The only way to proceed without friends is to spend some real world cash every time you die, upgrade your castle or pull a friend back in the game. The NPCs provided by the game are too weak to help you proceed much farther.

This is an intentional move by EA2D since the main aim of this Dragon Age: Legends is to win virtual gifts which can be used in recently released RPG Dragon Age II for Xbox 360, PS3, and PC. Even if you presently don't have this game then you can use these rewards later on when you finally get your hands on Dragon Age II. Although these games are not of much use and you get a few of them in the srart of the game itself but there is no denying that Dragon Age: Legends is a interesting console/Google plus crossover.

I have hardly told you anything about the game as there is much to tell but I doubt you have the patience to read  So all I can say that Dragon Age: Legends is a nice addition to Google plus and shows that there is huge potential for turn based RPSs on Google plus. Though some hardcore Google plus or Facebook players might find the step based system a bit old but many of these same players don't know how better this game is from other turn based RPGs on Google plus and Facebook.