Samsung is one of the leading Android smart phone manufacturer across the globe and Nokia is their best rival in smart phone world. Here I am going to introduce two smart phones Galaxy Note 3 from Samsung and Lumia 1520 from Nokia to find out who scores the maximum when comparing these high-end smart phones. Samsung Galaxy Note 3 comes with S-pen stylus input and good software backing, whereas Nokia Lumia 1520 comes with a bigger camera sensor and higher resolution camera. 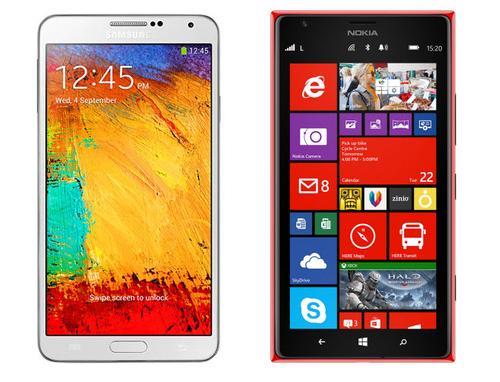 Both these smart phones represent two reputed platforms Android and Windows Phone. Here Galaxy Note 3 runs on the latest Android 4.3 Jelly Bean version and equipped with Quad-core 2.3 GHz Krait 400 (N9005, N9002)/ Quad-core 1.9 GHz Cortex-A15 & quad-core 1.3 GHz Cortex-A7 (N9000) processor, Qualcomm Snapdragon 800 (N9005, N9002)/ Exynos 5 Octa 5420 (N9000) Chip set and Adreno 330 (N9005, N9002)/ Mali-T628 MP6 (N9000) GPU. On the other hand Lumia 1520, the first Windows smart phone with Qualcomm MSM8974 Snapdragon 800 Chip set and an extra large Full HD screen. It runs on Microsoft Windows Phone 8 Black operating system and equipped with Quad-core 2.2 GHz Krait 400 processor and Adreno 330 GPU. Lumia 1520 lacks in sensors such as Barometer, temperature, humidity, gesture which are available in Galaxy Note 3. With these specs it's little tough to provide scores for any of these devices. Both these smart phones runs on the latest operating system versions from its platform and both are equipped with quad-core processor. However Galaxy Note 3 possesses a 2.3GHz processor speed whereas Lumia 1520 has only 2.2GHz processor speed. By comparing the processor speed and availability of sensors we have to consider Galaxy Note 3 as a winner in this section.

Camera and it's features

Both these smart phones blessed with impressive rear cameras. Galaxy Note 3 has a 13 MP auto focus rear camera with a resolution of 4128 x 3096 pixels and an LED flash. It's bundled with features such as dual Shot, Simultaneous HD video and image recording, Geo-tagging, touch focus, face and smile detection, image stabilization, panorama, HDR etc. When we compare the rear camera of Galaxy Note 3 with Lumia 1520, Note 3 is far behind than Lumia 150. Lumia 1520 possess a 20 MP Carl Zeiss optics, auto focus rear camera with dual-LED flash light. 1/2.5'' sensor size, Pure View technology, dual capture, Geo-tagging, face detection, panorama are the key features of this camera. However Nokia fails to keeps this record on track in its front facing camera. Because Galaxy Note 3 has a 2 MP front camera and Lumia 1520 has a 1.2 MP one. However the 20 MP rear camera helps the Lumia 1520 to stand as a winner in this section.

Battery is an important factor in smart phones. The important thing is that the smartphones are filled with apps which sucks the power from the battery. If a Smartphone doesn't have a powerful battery then it will not succeed in the market. Here Galaxy Note 3 has a Li-Ion 3200 battery which is able to provide a standby up to 420 hours and talk time up to 21 hours. In Lumia 1520 it is powered by a powerful non-removable Li-Ion 3400 battery which is capable to provide a standby time up to 768 hours and talk time up to 27 hours 40 minutes in 2G networks and up to 25 hours in 3G networks. It's also able to provide a music play up to 124 hours. On battery power Lumia 1520 scores more with its powerful non-removable 3400mAh Li-Ion battery.

Both these smart phones are the best from their platform and bundled with a lot of features. Both of these devices are better than the other. In my opinion if you want an Android device go for Samsung Galaxy Note 3 and if you are looking for a Windows platform device go for Nokia Lumia 1520.