Google Nexus 5 is the very first android smartphone that came with Google's most recently released iteration of mobile operating system Android 4.4 KitKat. Like its forerunner, the Nexus 4, the brand new handset also has been built by Korean electronics giant, LG. Arguably, this handset is one of the beautifully built and impressively priced devices now available in the market. Apart from clear visual refresh brought in this device, nexus 5 users will get all the latest features like Intelligent Caller ID and the new Google Hangouts SMS app. Most importantly, this device comes with latest top-tier specs and with impressively budget prices from the Search Engine giants, Google. The price tag of the handset and the promise of priority software updates make this device an irresistible proposition. 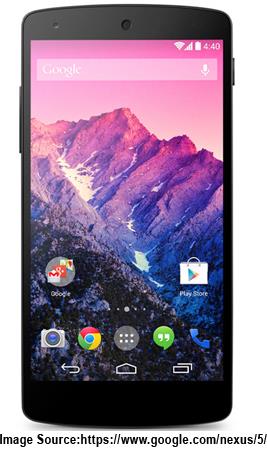 Without any doubt you can say, the Nexus 5 is extremely fast, stunning, and packed with features, including LTE, and it is the device for revealing the real power of the Google and its own mobile Operating System, Android. But the question is, can it defeat other flagship Android phones from other smartphone manufactures? Lets find it out. 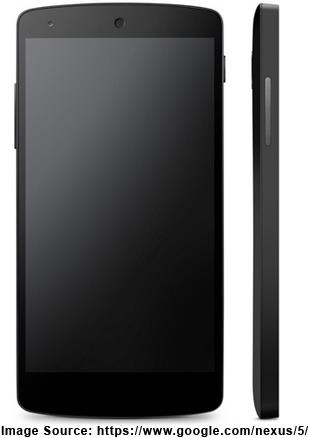 The LG built Nexus 5, which is available in Black and White color variants, comes with a 5-inch 1080p IPS display offering us 445 PPI Pixel-density. As being a 5-inch display device, the handset itself is very big, though not entirely awkward. It measures 137.9 x 69.2 x 8.6 mm but for the reason that bezel is so narrow, the handset itself isn't pushed wider by its huge display. Despite having a large 5-inch screen, I didn't face any trouble using it with single hand, may be because of the handset being weighs only 130 grams. However, you can't find anything really striking in this device's design that will grab your attention. This device is made of plastic and doesn't give a premium look. It means you don't find the super-classy build quality of HTC One or Sony Xperia Z1, even so the device's body is classy enough to suit its internal parts.

Talking about design, this device's edges are less curved and its corners less rounded when compared to other phones, including its predecessor the Nexus 4. Above the display, there's a round earpiece, and it is surprisingly loud for its size. If you look towards the left of that is the front camera, and underneath the display is an LED notification. It features a 3.5mm jack at the top, volume rockers on the left, power key on the right edge and the charging port at the bottom. Because the back is non-removable, the SIM slot has been positioned near the power key. The base of the handset incorporates a micro USB port for charging and data transfer, and two grills - one housing an external speaker, and the other a microphone.

Flip the handset over, showing its backside, and you can see the word logo Nexus printed on the soft-touch cover. The handset has done away with the lustrous, tile-patterned back, and changed it with a matte kind of material. It might not appear as super-flashy as the back finishing of Sony Xperia Z1, but the new matte backing provides good grip. One issue with the new matte finished back-panel is it's prone to fingerprints and smudges. There is an 8MP rear camera placed in an unusually large module, and a powerful LED flash just below it. Because it is a Nexus device, you cannot take away the cover to switch the battery, undoubtedly there is no micro SD card slot provided to expand storage. If you need more storage space, then you can go for a 32GB model instead of 16GB model. 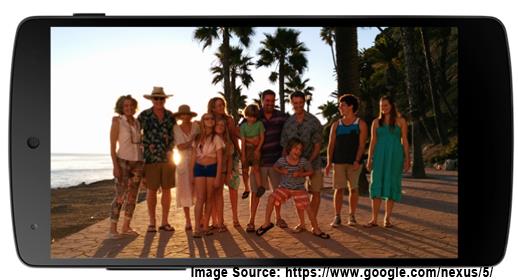 The Nexus 5 comes with a 5-inch 1920x1080 display panel, which is turning into the standard for high-end smartphones. In this device, LG used Corning's Gorilla Glass 3 protection which makes it highly resistant to scratches. Its screen offers great viewing angles, even though it was a little reflective. Also, its whites are so pure, text is super-sharp, and the display's touch screen area has just the right amount of resistance to finger dragging to make it a great to use. It is also great that LG has handled to cram a 5-inch panel into a device slightly any wider than a lot of 4.7-inch handsets, which makes it just as hand and pocket-friendly as those smartphones. Clearly, the hardware is designed to enable you to focus on the display.

Its 1080p IPS LCD is huge, bright and eye-catchy, even though it might not be capable to unseat the HTC One's SuperLCD3 or the Galaxy Note 3's Super-AMOLED when it comes to contrast and vibrancy, it's a great-looking display regardless. If you considering the everyday experience the device's display is still amazing, it's sensitive, and super-responsive to the touch. If you asked my opinion about its display, then, of course I would say that its display is stunning, excellent for HD gaming, viewing HD videos and browsing the web. 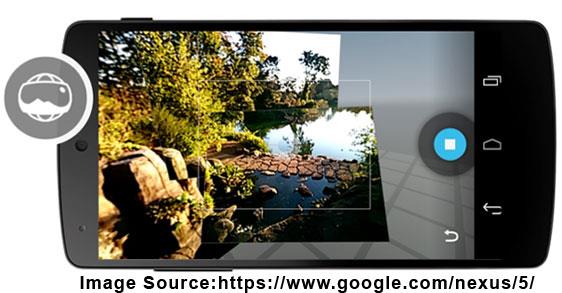 The Nexus 5 boasts an 8-megapixel rear camera with Optical Image Stabilization, and a 1.3-megapixel front camera. First of all, the camera user interface for software changed slightly in Android 4.3 Jellybean and has continued to be the same here in Android kitKat 4.4 version. Sadly, it's not a good camera user interface at all. The phone comes with the stock Android 4.4 KitKat Camera app with four default shooting modes - Video, Still, Panorama and Photo sphere.

Talking about the camera performance of this device has been such a disappointment after using it. The images generated by device's camera were generally good in daylight, with appropriate colors and well-resolved details. But low-light shots were not up to the level and I found a lot of noise. There's also HDR+ available, just like the HDR mode found in many camera smartphones, this function captures several shots at different exposures and blends them to make a perfect image. Perhaps, that's what it should do, but it does not work so well in this camera. In several cases, I really had a tough time identifying photos that were captured with HDR+ turned on, and where it was turned off. I also noticed that auto-focus is not steady, and focusing manually takes more time leading to images being different from what we expected. Sometimes it focuses absolutely okay, and at other times it won't focus at all. Also, the camera app isn't as responsive as I'd expect, too. Alongside, its shutter lag is also a major issue. There are some situations when you won't get the shot you expected due to the shutter lag. Its camera can also be slow to start in certain cases, mainly if you try to jump straight into the camera app from the lock screen.

The Nexus 5's camera does a fine job for shooting videos and supports 1080p video capture, which is turning into standard on most high-end smartphones available these days. The 1.3-megapixel front shooter is also good for video calling and it supports 720p video capture.


Nexus 5 is the first android smartphone to ship with Android 4.4 KitKat, the latest release of the android operating system. The new OS on the Nexus 5 offers a number of visual changes such as a new launcher, making the UI even more minimalistic. It boasts flatter design factors, transparency, and better transition animations. The new Operating System also incorporates an immersive mode that hides the navigation and status bars providing a full screen experience in apps. The launcher has been reworked with icons looking slightly bigger than avatars in previous iteration of OS and dots are used to show the pagination in the home screen and app launcher. Alongside, you can now use as many home screens as you wish by simply dragging icons or adding widgets on a new one.

Surprisingly, you can also start voice search from the device when it is in the unlocked condition by just saying, 'Ok Google.' Android 4.4 also incorporates a reworked Phone app that now automatically prioritizes your contact list based on the people you talk to the most. Google has also blended its chat service and the Messaging app into one app, named Hangouts. This app allows you to chat with your friends who use this service and send messages to contacts.

The device also features the new Photos app that enables you to see and edit local and Google+ images. Google also added its other apps including Google Drive, Play Games, Play Books, Play Movies, Quick office and so on. Overall, KitKat 4.4 on the Nexus 5 is an improvement in terms of overall experience of using the device.


In terms of hardware, this time the Nexus 5 arrives with top of the line hardware, as it runs on quad-core 2.26GHz Qualcomm Snapdragon 800 processor with 2GB of RAM, and an Adreno 330 GPU for processing graphics. In 32GB model, 26.7GB is available to the user. It doesn't offer a micro SD card slot to expand the storage memory. The overall experience of navigation via the handset's interface was incredibly remarkable. Actually I didn't experience any lag at all while starting apps, playing HD games, switching between apps on the device. The gaming experience on the device was fairly good with games like NOVA 3, Modern Combat 4, Temple Run 2, Subway Surfers, Shadow Gun and Asphalt 7 running without having any issues. I able to play a number of video format except for full-HD MOV and AVI via the native video player available on the device. Alongside, I also found some issues with audio while playing MKV videos. But, you don't need to worry about it, this is easily get fixed by installing a third-party video player. The speaker installed on this device is another pain. It offers below average sound quality at high volume levels and you might notice that the sound gets distorted. Even so, the speaker grill is positioned at the bottom edge so the output sound doesn't get muffled when the handset lies on its back. Notably, this device doesn't come with FM radio functionality. The call quality is good on the Nexus 5, and I was able to get cellular signals even in low signal areas. The Nexus 5 arrives with a 2300 mAh battery, and based on my usage, it lasted just about a day with medium usage. Altering some settings for, such as, Wi-Fi, 3G settings might help running the device for a longer duration, depending on your usage.

Of course, the LG built Nexus 5 is one of the best Android smartphones that you can buy which is priced under Rs. 30,000. This device is powered by a Snapdragon 800 processor, along with 2GB RAM, and Adreno 330 GPU. Since it is a Google's device, don't worry, you are always guaranteed of regular software updates. Thanks to its spectacular display and small bezel which makes you'll only be focused on its brand new OS, Android 4.4 KitKat. I love its high resolution display, overall performance and the improvements brought on Android KitKat. Sadly, its camera is such a waste and I'm really depressed after comparing its camera with flagship devices from other manufactures. I heard some rumors that Google has already admitted the fact that its camera is not that great and it seems that the issue might get fixed with a software update. Other than this camera issue, without a doubt, we can say this is the best Nexus yet, also it is one of the best Android smartphones available in the market, considering the price tag.

Read How to configure Android L launcher on Nexus 5 or similar Kitkat devices?

Where to buy Google Nexus 5 online

LG Nexus 5 vs LG G2; Review and Comparison of the Specs and Features of Two Android Brothers from LG

Very good information about the features and specifications of Nexus 5 Android smartphone. What is the latest model of Google Nexus series phone.