Sporty Qwerty keyboards and Blackberry smartphones together reigns the mobile world for some time now. Now, the company moves one step further and bends to make a mark in the touch screen arena. Though the company has been through the ups and downs in the past, but nothing has been a hurdle since it keeps innovating and delivering classy handsets to the consumers. Keeping the trends, the current fiscal year has been a good one, especially, when the company came out with devices like the Q10 and Z10. These handsets made a mark because not only these had a greater density but also loaded with greater connectivity options. Now, the Z30 comes out from the stable of Blackberry with a better screen, better specs and loaded with decent software. A close look at the specs and features would show what it has to offer and how well it would do in the market. 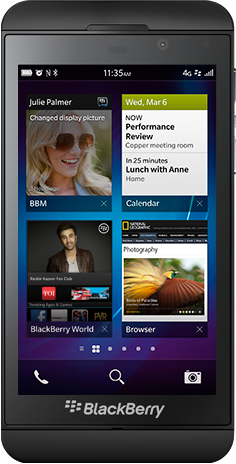 
Blackberry entered the phablet segment, at the beginning of the year, with the launch of the duo handsets viz., the Q10 and the Z10. The overwhelming response has stimulated it to come up with Z30. The display of the device catches the attention at the very first look. The 5.0 inch screen with the Super Amoled display resolution of 1280x720 and pixel density of 294 ppi looks brilliant. Besides, it weighs only 170 grams (on the lighter side), 9.4 mm thick and 72 mm wide which means this could fit into a palm easily. So overall, it looks compact and attractive.


The hardware feature of the device shows promise. It runs on the dual core 1.7 GHz Qualcomm processor. Besides, the embedded 2GB RAM provides ample power to the device. Besides, it also expands to 16 GB for on-board storage with external memory card. All these features assure a decent performance and smooth navigation with no lagging behind. Moreover, it houses great connectivity features like 3G, Wi-Fi, Bluetooth and NFC. However, there are some issues with the Wi-fi connectivity. Like any other phablet segment device it has the front and the rear camera. The rear camera has the 5X zoom, the led flash feature and capable of shooting full HD videos. The music player application easy to handle. The sound output quality good and supports several music formats like AMR, AAC, MP3, WMA, WAV, etc. Moreover, premium music available from the Blackberry World application. However, it does not have the FM radio software application.


Traditionally, software is the most noteworthy feature of the Blackberry devices and the Z30 does not defy this rule. It works on the Blackberry 10.2 operating system which is an inspiring upgrade from the earlier 10.1 version operating system software. The swipe up feature unlocks the display and again minimizes any running application. The instant preview feature helps to preview application at the top of the screen, even when busy using an application. This helps one with the option to respond any of the application without actually exiting the application one is busy with. The default proprietary browser of the company fast and smooth to bring out the best web browsing experience. One may also download browser from the official Blackberry world application.


It boasts of Li-ion 2880 mAh non-removable battery which could keep one going for long hours without charging. Even after using the handsets for watching videos, listening music and playing games for long hours it does not need a second recharge on a given day. This handset available for RS 39,850.

A good touch screen mobile handset from the company that promises consistency and class. One could have a great time and enjoy smooth typing and the best web browsing experience. Nevertheless, a great device for regular mailing, messaging and socializing. However, lack of applications available from the Blackberry world is a big concern. Competitor operating systems like Android and Apple provide the end users with the options to download countless applications from their market. Besides, not having a full HD display and its steep price is the other valid reasons it would keep consumers at bay.

The specifications and features Blackberry Z30 phablet given in this article are fantastic. But the cost of his phone is Rs. 39,850/- which is not in budget range. But still this phone is coming with 2GB RAM and 1.7 GHz Qualcomm processor which is quite interesting. Is there any other low budget phone available in the market with same specification?