Don't worry. I am not going to spoil anything story related for you here and I am going to backup my words beyond my promise. Admittedly, it gets difficult to steer clear of spoilers with other games, but not with Skyrim. The world is huge with so many things to do, to explore, to just stand and behold the beauty that I don't need to spoil anything to do this review.

Skyrim takes place in a frozen place just north of where the Elder Scrolls: Oblivion took place. The game sets you up with a brief introduction where you are told that Skyrim is in the middle of a revolt and you are sentenced to death. Just before you are about to be beheaded, dragons show up in the down. And your journey begins. Good luck!

It's your choice whether you want to follow the main quest and go to the Riverwood or wander around to embrace the beauty of a world that Bethesda has created for us. The only moment where the game holds your hand is when you are at the inception of the game. Once you are out of the Helgan city through the cave, there is 40 kilometers of landscape to explore for you.

The Scope and Freedom

If you have played the previous Elder Scrolls games, you will be familiar with the scope of these games and the freedom the series offers you. But still, if you have just landed on the Skyrim, the new settings and the huge open-world can be a bit dizzying. Despite spending more than 100 hours with the game, it still feels fresh and unknown to the scale nether of the previous two games of the series could manage. Such is the vastness and dynamism of the Skyrim world.

The hulking mountains play a huge role in how you travel in this game. The travelling is challenge in itself which is divided in two parts; scrambling across the steep rocks and skidding down the treacherous slopes. It's variety of the gameplay that makes a difference here and sets it apart from its predecessor. Even after being more than 30 hours into a game, when I blundered into a dungeon presuming I'd done it before, it was a drastically different experience for me. You are bound to stumble across various abandoned shacks, unique stones, forts teeming with bandits and wandering travellers every few minutes in your journey. The game is swarming with fascinated places to explore. Neither of it is forced upon you though. You are free to explore at your own pace. 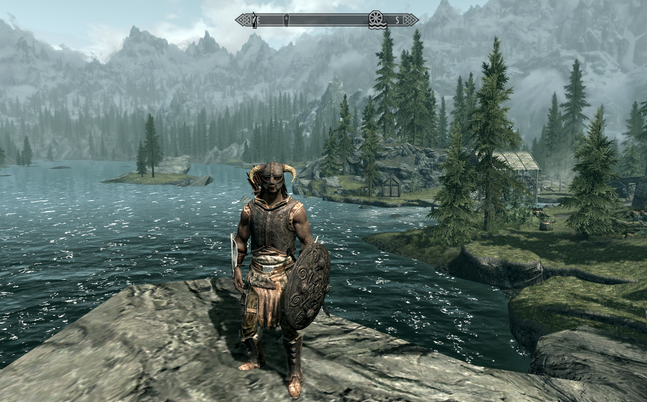 The places are what makes this game really intriguing and interesting. You step into them with your heart in your mouth wondering what you will come across the next moment to discover dark gods, forgotten spells, underground waterfalls, hideous insects and traps. It's immensely gratifying to clear up a dungeon and come out of it unscathed like a true savior of the world.

The dragons play an important role in this game, but they don't show up until you do some of the main quests of the game. So, it's up to you whether you want them in your experience or not. I didn't bother doing any of the main quests initially and didn't encounter any dragons as a result. But you wouldn't want to do that. The world with almost-40-foot giant flying lizards spitting ice and fire is much more interesting one to be in than the world without them.

Leveling up and Perk System

Your character gets better and level up at whatever you do; be it sneaking up on someone, casting spells, firing a bow or swinging an axe. It's something which has always been a part of Elder Scrolls games, but Skyrim is a little bit different. You can just let your character develop organically without deciding what you are going to focus on. As you continue to level up and upgrade your skills, slowly but surely, your character becomes a mighty beast. But you are the one who decides how and where to spend all the perks you get that plays a major role on how your character develops.

While the game is certainly a gem, there are quite a few things I didn't like about it. For the starters, I loathe the fact that I can't design my spells in Skyrim, something I loved doing in Oblivion. Now, you will have to play with all the spells you will get from shops or from various mods. On the other hand, the physical combat system hasn't improved one bit. Of course, there are fancy cinematic kill moves to intrigue you every once in a while, but the stagnant combat system leaves a lot to be desired.

The main quest line has some of the best and worst moment you will encounter while playing. While the main quests themselves are really good, the acting and the dialogs delivered are stagey at best. You will have to endure interminable expositions of old men before you can progress further which can be a tad irksome and superfluous at times. Other than that, it's really well done. He main quest line is a mixture of adventure and exploring the incredible new places in the Skyrim. Even the faction quests are much better now. They start off small, but unravel into a bigger and better quest lines once you delve deeper into it. They fell like personal epic unlike the main quest.

There is a lot of everything to do in this game. Skyrim is almost the same size of Oblivion, but it feels like it's twice the size, because there is so much more to do in this game. Searching for dragon shouts is a different experience in itself. Similarly, clearing up a dungeon is a really gratifying experience.

All in all, this is a benchmark for the open-world RPGs. While other open-world games try to faffle around with how to restrict and control a player, Bethesda has done something different here; they have put a huge city in a box. In the end, I would just like to say that it's the best RPG I ever played and it still is one of my favorite places to revisit time and again. If you haven't played this game yet, you are missing out on a lot. Go get it. You won't regret sparing your hard-earned cash on something as beautiful as this game.

Read Games Like Skyrim - Open world games you should play