Gionee GPad G3 is the latest smartphone from the Gionee, which went on sale online last month. Now, the company has decided to launch it officially in India. Earlier, we have seen Elife E6 flagship smartphone from Gionee that sports many trendy features and high end specifications. Some of the features of Elife E6 smartphone are its 1.5GHz processor, 2GB RAM and 13-megapixel rear camera etc. 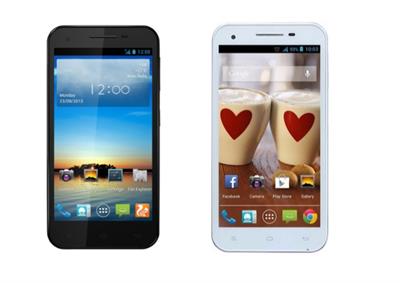 The all new GPad G3 of Gionee comes with a big screen. The size of display is 5.5-inches. The display type is capacitive touch screen with a resolution of 854 × 480 pixels. This huge display can give bright and vividly clear pictures with 16M colors support.

It is just 9.6mm thick. The phone measures 157.3x79.3x9.6 mm as its dimensions. Gionee GPad G3 smartphone looks very good with elegant design and it is very handy.

Gionee has provided GPad G3 with Android OS, v4.2 Jelly bean. So, you can download unlimited Apps, Games, Books and Music from the Google Playstore. The handset has been equipped with a 1.2Ghz Quad core processor. The CPU type is MediaTek MT6589, Cortex A7 and there's a PowerVR Series5XT GPU as well.

The internal memory offered by GPad G3 smartphone is 4 GB, which can be expanded by up to 32GB with the help of a microSD card. The RAM of this phone is just 512 MB which could make the phone lag in giving high performance. This is really a disappointing factor, the company should have provided 1GB RAM at least for crash free operations and hassle free multitasking.

The latest GPad G3 smartphone showers many connectivity options for its users to stay connected with their friends and family. Some of the features offered by this phone include 2G, 3G, Wi-Fi 802.11 b/g/n, Bluetooth 4.0 with A2DP and other. You could surf the internet by making use of WAP 2.0/xHTML, HTML Browser in this phone.

GPS, Senors and other features

Gionee GPad G3 smartphone aides GPS facility with A-GPS Support. There are a couple of sensors incorporated in this phone like Proximity sensor, G-sensor, E-Compass etc. The other features of this phone are FM Radio, Light Sensor, Digital Compass and Face Unlock. Moreover, here is a good news for Dual SIM phone lovers, it is a Dual SIM smartphone with dual standby support.

The GPad G3 phablet has been equipped with a 2250mAh battery which can procure ample power supply. However, there is no official word on its battery backup capabilities for now.

If you are willing to buy this latest GPad G3 phablet then you can buy it for an MRP of Rs 9,999 from various online and offline stores. Fortunately, the online shopping portals like Snapdeal and Flipkart are offering at the best price of around Rs. 9,400.00 only. Gionee GPad G3 would be available in black and white color variants.

It's time to wrap up the article. The latest Gionee GPad G3 smartphone comes at an affordable price with some interesting features. It is worthy to buy for those who are looking for a new big screen Android smartphone with Dual SIM capabilities.

What do you think about this new smartphone from Gionee, folks? Are you going to buy it? Let us have your notion through the comment section provided below.