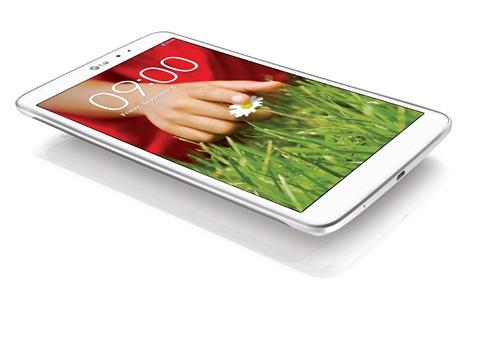 LG expanded their products profile by adding first 8 inches Full HD tablet PC to its portfolio. The tablet runs Android operating system and powered up by a powerful quad core processor. The company had announced this tablet in the IFA 2013 event at Berlin in Germany. Earlier it was planned to release in end of this quarter but surprisingly the company has started taking its pre-order for US customers and it will be shipped to customers, next month.

Since it is a light weight machine with powerful battery backup so, most suitable for mobile business users. It is packed with a quad core processing chip and having full HD display.

LG G Pad is a light weight computer that weighs to 338 gm but having larger display and size than the phablets we generally use, nowadays. It comes with 216.8 x 126.5 x 8.3mm size and the wider display of 8-inches. It is sleeker in shape and highly portable.

It is first LG tablet with 8.3 inches Full HD display support. With pixel density of 173ppi, it owns 1920 x 1200 resolution as well as Widescreen Ultra Extended Graphics Array (WUGXA) throwing better resolution than other FHD tablets and laptops we are using today.

The Android based LG G Pad 8.3 handy machine runs 4.2.2 Jelly bean in background and powered up by a Qualcomm's Snapdragon 600 quad-core processing chip with clocking frequency of 1.7GHz. About memory, the device is packed with 2GB RAM and 16GB of eMMC storage.

With 4600 mAh of powerful battery, LG G Pad 8.3 is capable to offer long power backup to its user. It means you can go outstation without fearing of draining out your system's battery, even when out for long time. The Android machine comes with two cameras of 5MP rear as well as 1.3MP front facing for video calls.

The customers will get tablet preinstalled with numerous softwares including QMemo, KnockOn, Qlide and QPaid apps. The QMemo allows you sharing/transferring your GPad notes with other mobiles and digital devices. You can run three apps side by side using QSlide where the QPair allows lets you read and reply your Android mobile phone calls. Since the mobile phone make is not issue here, you can use any brand android cell phone for this purpose. Finally the KnockOn app lets you waking up display of you tablet just by tapping it up.

LG has started taking pre-orders for G Pad from US customers on Best Buy and set its price at $350. Soon, it will be available for other countries' customers also.


Introducing 8.3 inches tablet is the bold step from LG as the customers are mostly use to standard 7 inch tablet models. But unique products are often welcomed by tech market as they raise users' curiosity. Full HD and powerful battery support is the additional plus point of this device. The decent look and aesthetically designed machine is highly anticipated raising good revenue for the company.