Watch out, Samurai warriors are not only in town, they are right on your gaming screen. Fight them and you win the game Samurai Siege, the latest mobile combat simulation game.

Replacing the usual combat community of dragons or medieval warriors, the storyline of Samurai Siege is pivotal on Samurai Warriors and it is you on the other end to defeat them. Fit into the role play of a villager of Kyoto, who is enthusiastic about building and renovating his village by developing strong defence power, modernize it by erecting new buildings, train up villagers for self-protection and also prepare them to increase the territory. The game can be played by members joining in either Clash of Clans or in Greed for Glory. 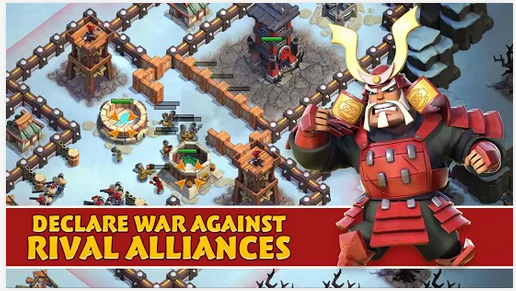 As a player you are given two modes of tasks in Samurai Seige, you have to manage the village and you have to fight too. In fact the first task is in a way a preparatory one to perform the next. It becomes your job to build up the village defence system strong before the fight. This will need to involve training villagers to fight for their glory and self-defence. As the game marches ahead, you keep creating things that will lead you forward for the fight. If you create a trader's platform, you improve the village economy as well as your scoreboard by generating coins. To win the game, all you need to do is pulling up resources to train up your villagers as the unbeatable Samurai Warrior clan.

As and when you keep renovating your village infrastructure, your currency will go for a three stage flow. You'll get to see coins which will be encircled by green. When you initiate the process of building up a market, these are generated and get stacked up in vaults and finally will come to use while developing the defences. There are more important tasks like improving the castle which will unleash units and buildings. Then there are Essences from those wells which are kept in the storage tanks. Use them when you choose to build structures of a particular kind. For your contingency there are the Diamond currencies. You can buy all these through micro transactions and simultaneously you can coins and essences can be earned by encroaching and defeating other villages. Samurai Siege offers bonus points if you are playing against other real players and can conquer them. But you don't need to take the entire burden by yourself, invite alliances and share the fight. 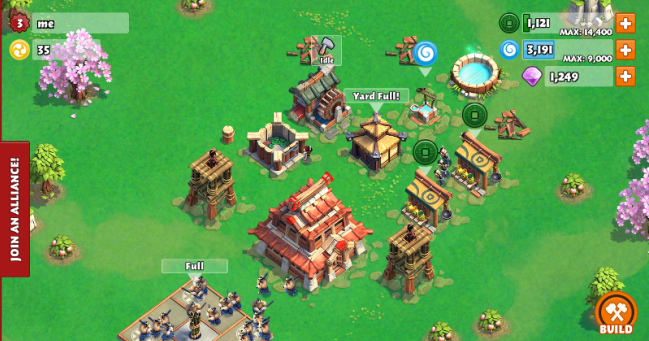 Though Samurai Siege can be loaded in your mobile application, but its technical hitches make it obvious that it would have been best for tablets. Sometimes the currency doesn't work and you may have to restart the entire process, which is quite frustrating. The visuals do attract a passer-by and make them play, but the text and icon parts are suffering from clarity and ease of visibility. But the flaws aren't excuses enough to skip the experience, as the gameplay and design along with its challenges are too intriguing to grumble for the inconveniences. However Samurai Siege can win over the market if the technicalities are taken care of.