Developed by an indie developer, this game doesn't look promising at the first glance. I kind of stumbled on this game as I was scrounging for a good game on Google Play to kill some time. I tried some games, but like so many free to play games, most of them were not up to the standards one would expect from a good game. I decided to give it a go despite the lack of description of what this game is all about. Here is my experience with the hands on with this game –

There is no plot or storyline to talk about there as you will expect from an indie game with not much production value. The game starts as you as you tap start and it leaves you in the middle of nowhere. Stepping into the shoes of a sniper who likes to snipe zombies just for the sake of it, you will be spending all your time trying to shoot zombies nonchalantly approaching at you. As far as storyline goes, that's all you will get. To be honest, there is no need for any kind of storylines in this kind of game. Who needs a storyline when you have got a gun and a boatload of zombies to kill? So jump in without thinking too much about why you are placed in such a precarious situation. 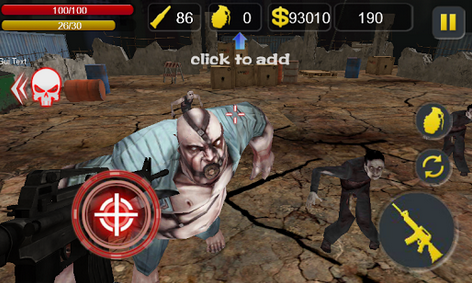 Before installing this game, you should ask yourself these questions; do you like mocking and killing zombies? Have you always had a thing for them? Do you always fantasize yourself going on a hunt with a sniping rifle? If yes, the only difference being, en this game is made for you. You will love playing it. The only difference being, you will be hunting zombies instead of animals.

In all seriousness though, the gameplay is surprisingly smooth and well done. The aiming and shooting is really precise and fun. The game wants you to not mindlessly shoot at your enemies. Instead, they want you to aim for the bull's eye – right in the head. You will be rewarded for headshots and the zombies will go down in only one shot. Not only you will save yourself some ammo, but you will be rewarded for it.

Talking about zombies, there is some sense of intelligence in the way AI is developed for them. They will beset upon you from all the sides and thus leaving no way for you to escape. If you are not agile and don't precise with your aiming, they will eat your flesh in no time.


The game definitely does what it promises in its vague description. It promises on some destructive and enthralling gameplay with the element of gore and delivers on that. If you are looking for a good zombie game to play, it's definitely worth checking out. It won't eat up much of your space either as it's only 27MB in the size. For a 3D game to be so trivial in size is an achievement in itself. Overall, I would rate it a 9 out of 10. Grab it while it's still free to play. It's definitely a premium quality game.