Sony India has officially launched its latest Android based dual-SIM smartphone called Sony Xperia C in the Indian market. Earlier this month, the phone was listed online by many e-tailers. The phablet comes with many impressive features and specifications like dual-SIM with dual standby, Android 4.2 Jelly Bean, 8-megapixel camera and more.

Are you excited to know more about this new dual-SIM Smartphone, Xperia C? Okay, in this article I'm going to review the complete specifications and features of Sony Xperia C smartphone. 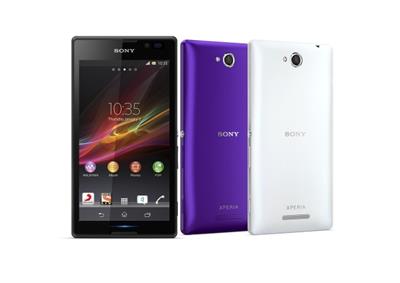 Let's have a glance over the specifications, features, price and availability of Sony Xperia C, below.

The Xperia C of Sony comes with a large 5-inches display. The display type is TFT capacitive touchscreen, with 16M colors depth. The screen has a multi-touch functionality up to 4 fingers. It has a resolution of 540 x 960 pixels. The pixel density of the handset is 220 ppi, which makes the device to deliver high quality pictures. The phone looks very slim with 8.88mm thickness and it weighs 153 grams only. I think the smartphone fits pretty well in hand. The dimensions of the phone are 141.5x74.15x8.88 mm.

Sony Xperia C was announced globally in the month of June, 2013 and it is launched on 17th October, 2013 in India.

The Xperia C smartphone of Sony runs on Google's Android 4.2.2 Jelly Bean operating system. It is equipped with a Quad-core processor that colcks at 1.2 GHz. The chipset used in this device is MTK MT6589 with PowerVR SGX544 GPU.

The internal memory of the all-new Sony Xperia C smartphone is 4 GB only. However, the microSD card slot provisioned in this device allows the memory to be expanded up to 32 GB. It incorporates 1GB of RAM that makes multitasking quite smoother and can also give excellent gaming experience.

The Xperia C sports an 8-megapixel rear shooter with LED Flash and Exmor R sensor. The camera of this device comes with many features like Geo-tagging, touch focus, HDR, face detection and Sweep Panorama, and is also capable of recording videos in full-HD (1080p) mode. Also, there is a 0.3-megapixel front camera that aides in making video calls with friends and family.

The dual sim smartphone packs a couple of sensors that include Accelerometer, proximity and compass. The proximity sensor locks the phone while you are on a call. The Xperia C comes with A-GPS support. It also has a Java support through Java MIDP emulator.

If you want to chat with your friends, then make use of many messaging options in this phone. It supports SMS(threaded view), MMS, Email, IM and Push Email as well.

On the connectivity front, the handset offers many features that include 3G HSPA+, Wi-Fi 802.11 b/g/n, DLNA, GPS, MHL. If you want to share your personal files with friends then you could make use of microUSB v2.0, Bluetooth 4.0 with A2DP and other. For browsing internet through your mobile there is a HTML5 browser in this Xperia C smartphone. In addition to these options it has motion-gaming, Stereo FM radio with RDS, Walkman app and 'screen mirroring'.

When it comes to battery capabilities, the new Sony Xperia C smartphone backed by a 2,390mAh battery with Battery STAMINA Mode, which the company claims can deliver up to 10 hours of talktime and up to 588 hours of standby time on 2G as well as 3G.

The Sony Xperia C has been priced at an MRP of Rs. 21,490. However, fortunately, some of the online retailers in the country are offering the device for Rs. 20,000 only. The Xperia C will be available in three color variants that are Black, White and Purple colors. Apart from the e-commerce websites, you can also buy the phone from all Sony Centers and major retail stores across India.

Along with the phone the buyers can avail Sony headphones worth Rs 1,490 for free. Sony is also offering accidental damage protection with the handset for six months from the date of purchase. It seems the company is very keen on yet attracting the customers. Sony has tied up with Airtel to offer 1GB of free data per month for two months for this device.

The Sony Xperia C bundles an array of amusing features and specifications that include Dual-SIM, Android 4.2.2 OS, 8MP camera, 1.2 GHz quad-core processor, 1GB RAM and more. Definitely, it will give the tough competition to other big phones like Samsung Galaxy Grand in the market. It is worthy to buy 'Xperia C' for those who are eagerly waiting for a best Dual-SIM Android Smartphone.

Hope you relished the specifications and features of this phone. Let me have your opinion on this new dual SIM smartphone, Sony Xperia C through the below comment section.

Are you looking for a mid-range smartphone from Sony? Well, Sony Xperia C is here. In this article we will see the detailed review, features and complete specifications of Xperia C. Read more to find pros and cons and even the price and availability of mid-range Android based smartphone from Sony.

Are you thinking of buying a new mid-range smartphone from Sony? If yes, then here is an option for you. Sony Xperia C is a new smartphone which comes with 5.0-inch display, 1.2 GHz quad-core processor and dual-SIM support. Read this article to know the features, specs and price of Sony Xperia C.

The battery that is very unique and supportable to Sony Xperia C smartphone backed by a 2,390mAh battery with Battery STAMINA Mode

So your article is very useful to those persons who are going to buy this smart phone but they have no information about it. It is very easily be found by your article that Sony Xperia C Smartphone is a very good phone and people may attract towards it after reading your article.