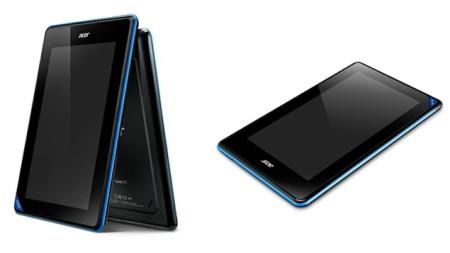 The tablet market is growing at enormous speed day-by-day. Being handy and affordable, tablets are attracting the consumers from different price segments. As we know that the high priced tablets from leading manufacturers are popular today for having high end specifications and best features. But now the low priced tablets are also getting popular among customers for offering good screen resolution and optimized performance.

Today, a wide range of Android tablets are available to purchase in market that come with high resolution display. Here, we have come with some of such high quality but low priced tablets available under the price range of Rs 10,000 in Indian market. Check out technical specifications and prices of these Android tablets:

Acer Iconia B1 is an Android smartphone, which is powered by a dual-core processor running at 1.2GHz and couples to 512MB RAM. It is packed with 8GB of internal storage and a user can expand it up to 32 via microSD card slot. Besides snap shooting you can use its 0.3MP front facing camera for video calling also. For connectivity, the Acer tablet features Bluetooth and Wi-Fi for wireless information transfer, GPS for navigation. There is also a micro-USB port for charging 2710mAh battery and offering wired connectivity to other devices.

With 17.1cm capacitive display screen the Micromax Funbook Talk tablet runs on Android 4.1 mobile operating system. It hosts 1GB RAM and encompasses a 1.2GHz processing unit. Micromax packed the Funbook with 1.65GB of internal memory that can be expanded up to 32GB. It offers two cameras - first 2MP rear camera for snap shooting and the other 0.3MP front camera is also there for video calling. You can connect the device with other digital equipments using Wi-Fi, Bluetooth. There is also a 2G SIM slot on smartphone with a powerful 3000mAh battery.

Asus announced this 7 inches tablet at Computex 2013 event and it is available to purchase in two memory sized variants of 8GB and 16GB. Running on Jelly Bean 4.1 operating system the tablet is powered up by a 1GHz processor. It has a 1MP front camera and comes with multiple connecting ports mostly found in contemporary tablets. It is loaded with 8GB of storage that is expandable up to 32GB and hosts a strong 4270mAh battery.

This Android handset encompasses a dual-SIM processing unit inside with a 512MB RAM and 4GB of internal storage. It has a smooth 17.7cm display screen. For photo shoot, a user can use its 2MP rear facing camera while the other 0.3MP front facing camera is also available on device for video making. It hosts a 3000mAh battery with variant connecting posts including 2G/3G with dual-SIM slot, Wi-Fi, Bluetooth and GPS.

It is an HD phablet with 17.7cm display and screen resolution of 1,024 x 600 pixels. It runs Android 4.0 aka, Ice-Cream Sandwitch operating system. The handset comes with a Mediatek processor clocking at 1GHz couples to 1GB of RAM. Though a user can raise his tablet's storage up to 32GB but originally it comes with 16GB storage. It sports two cameras – first 0.3MP front while the other 2.0MP primary camera. Its battery offers up to 8 to 10 hours of power backup and the device supports multiple connecting ports such as Wi-Fi, dual-SIM for 3G, GPS and Bluetooth facilities.

It is another best offer from Samsung, which is quite identical to earlier 3G model Galaxy Tab 2. It is also powered up by a dual-core processor that clocks at 1GHz with 1GB of RAM. It runs the 4.1 aka, Jelly Bean Android and hosts a very strong 4000mAh battery. The 3MP camera is the specialty of the tablet but other one is just a VGA. About storage, you will get the handset with 16GB, which can further be expanded using microSD slot.

This is one of the best tablets available at the low price range and with appreciable specifications. Its look is attractive with 17.7cm IPS display screen. The Lava tablet runs on the latest 4.2.2, aka Jelly Bean operating system. This model was launched in February, this year and got huge user's response. It is powered by a 1.5GHz dual-core processor, 1GB of RAM and sports 0.3MP front as well as a 2MP rear facing cameras. But you will get only 8GB of internal storage initially, which can further be expanded up to 32GB. It supports variants connecting ports and hosts a strong 3500mAh battery.