The South Korean firm, Samsung Electronics Co Ltd has launched the world's first smartphone with a curved display called Galaxy Round in Korea. Samsung Galaxy Round comes with many eye-catching features like a 5.7-inch 1080p curved display, a 13 megapixel camera and 3GB RAM. Are you excited to know more this Galaxy Round smartphone? If yes, then what are you waiting for?

Let's have a glance over the specifications, features, price and availability of Samsung Galaxy Round, below. 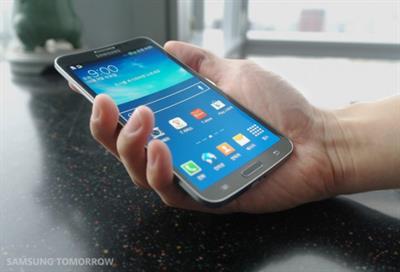 The handset features a big 5.7 inches display. The display type of this smartphone is Super Flexible AMOLED capacitive touchscreen with 16M colors depth. The special feature of the Samsung Galaxy Round is its curved display. Undoubtedly, it is the biggest highlight of this smartphone. It has a resolution of HD 1920 x 1080 pixels. The pixel density of the handset is 386 ppi, which is far better than many other smartphones in the market, makes this smartphone to give vividly clear pictures. The phone is very slim at just 7.9mm and weighs 154 grams. It measures 151.1 x 79.6 x 7.9 mm as dimensions.

The Galaxy Round of Samsung runs on Google's Android 4.3 Jelly Bean version OS. And it is powered by a powerful a 2.3GHz quad-core processor. The chipset used in this phone is Qualcomm Snapdragon 800 with Adreno 330 GPU.

Look at the back of this smartphone, you would see a 13-megapixel with LED flash shooter with many attractive features that include Dual Shot, Simultaneous video and image recording, geo-tagging, touch focus, face and smile detection, image stabilization, panorama and HDR. Galaxy Round smartphone has the HD video recording capability at 2160p@30fps, 1080p@60fps. Also, there is a front facing 2-megapixel secondary camera that allows users to greatly enjoy the video calls with friends and family.

Samsung Galaxy Round has an internal memory of 32 GB. The microSD card slot in this device allows the memory to be expanded up to 64 GB. Unlike many high-end devices, Galaxy Round comes with 3 GB of RAM, which combined with a powerful 2.3GHz quad-core processor, makes the multitasking quite simple and playing of video games a pleasing experience. Now a days, most of the smartphones come with 1GB or 2GB of RAM.

This smartphone sports a bunch of sensors that include Accelerometer, gyro, proximity, compass, barometer, temperature, humidity and gesture. Proximity sensor knows to lock the phone when you are on a call. The gesture sensor let you control your phone by making specific movements with your hand above the sensor. While the gyro make balance in gaming. The Samsung Galaxy Round smartphone comes with A-GPS support. There is a Java support via Java MIDP emulator as well.

The Galaxy Round smartphone of Samsung comes with a couple of unique features called Roll Effect and Gravity Effect. The 'Roll Effect' feature enables user to check information such as date, time, missed call and battery life easily when home screen is off, and the 'Gravity Effect' for creating visual interaction with the screen by tilting the device.

Samsung said in a statement.

You can with your friends on Samsung Galaxy Round by using various messaging options that include SMS(threaded view), MMS, Email, IM, RSS and Push Mail.

The smartphone is equipped with a 2800 mAh Li-Ion battery. This battery is good enough to procure ample battery backup. However, there is no information available regarding its battery backup capabilities. Though the panel is curved the battery in the Galaxy Round is not curved, Samsung said.

Key Specifications of Samsung Galaxy Round

Currently, Samsung Galaxy Round is available in Korea in Luxury Brown, and it will be available in more colours soon. This new Samsung phone available through South Korea's biggest mobile carrier SK Telecom at a price of 1.089 million won which is equivalent to $1013.

The Samsung Galaxy Round comes with many interesting specifications and features. Among which, its 5.7-inch horizontal curved Full HD display, 3GB RAM and other are highlighting features of it. I think it has a fair price to get your hands on the first commercial device manufactured with an upcoming technology.

With the introduction of Samsung Galaxy Round, the world's first curved display smartphone, it's heard that many other big manufacturers like Apple and LG are also planning to launch smart devices with curved screen soon. However, there is no official word from either companies.

These are all the eye-catching specifications and astounding features of the newly launched Samsung Galaxy Round smartphone. Hope you enjoyed it a lot. Let me have your comments on this latest smartphone, below.