Orborun is a popular action and arcade game which is recently launched into the market. Orborun is quite interesting to play and it throws many random obstacles to players. There are 100 levels in the game which are full of action, interesting elements, currency and many more. You don't get bored though you play it for days. So, let's start with the detailed review of the game. 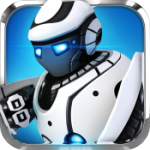 How to play the Orborun game

It is a very fun game which offers pretty stiff challenge to the player and he need to control a little robot named Orbot. Now, the player must have to roll through each level to achieve his goal by picking up keys. Orbot will also have to collect the currency along the way. In the game, Orbot can perform only three actions itself. Hence, Orbot can easily roll right, left and he can charge himself for short time. The player can chose either of touch or tit controls and this is the main positive point in the game. You can only guide the Orbot along his path to collect items to easily end the level and reach the next level. You will not able to unlock the next level until the first level is completed. You can also unlock extra levels by collecting a good number of stars and can also earn the game's secondary earning. You can use the earned currency for buying the new skins for your bot. There are about 100 levels in the game which are grouped into the three episodes. The player may not be able to end the first level in the first play; he surely needs to play the level twice or more. The starting levels and stages are quite simple but later becomes tough, adventurous and challenging. While playing its demo versions, I found that many stages have multiple paths and the player can easily choose one of the paths easily. In this level, you will be able to earn only three stars. The Unity Engine of the game is also good. Overall, Orborun is excellent game and works smoothly on your device. So, this is all about the challenging Orborun game.

You can follow the below tips while playing the game to help you easily finish the stages and levels.

1)While playing the game, always try to collect the currency in each level. Many users think that it is not needed to collect it but I suggest you to collect it. It will help in next level to make your bot more powerful.

2)Don't leave any star when playing the first time. You will not be able to unlock next or more levels if you don't have enough collection of stars.

3)It is a quite difficult game. The player can't beat the levels in first try so the second try do not give up.

The game has been recently launched into the market in the September month. It is not available for free download but to try this game you can download its trial version from the official website. The cost of the game is $1.99. It is a pretty challenging game which offers enjoyment while playing. If you are interested to download this game, you can grab it from Google play Store. It is a strategy based game which is full of puzzles and exciting elements.