The world is all set to be revolutionized in the current decade and of many things that will be changed is the way we use paper. Coming to the point, one of the uses of paper we have not been able to substitute with the current generation technology are forms. However, ProntoForms is here to change all that. With its 3 point architecture, it helps save paper while increasing the work efficiency of an organization by up to 10 times. 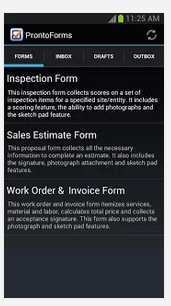 This is one of the most important parts of the 3. It serves the main forms administration panel for the organization using the ProntoForms. It is where the forms are to be created for the various employees taking care of various works in the field. When we talk about the field, we actually mean ground level work where people deal with real world scenarios and need to collect data in their day to day operations.

ProntoForms helps create forms for those employees to feed the data into and administer them all from the web portal. It involves not only creation of the forms but also administration of them. Following are the main features of the web portal.


All these features along with the ability to export the form data into PDF, CSV, DOCX or XML increases the flexibility and possibilities to a whole new dimension in terms of further processing and viewing of data not only by the organization but also by any third party that the organization authorizes the data to.

The web portal would be a useless screen or maybe it could be used as a good screensaver if it were not for the mobile part of ProntoForms. We know that on paper forms can be quite intimidating. I am sure that if you have gone through those long forms for submitting taxes to government, you know how it feels to constantly keep flipping pages just to read what you wrote two hours ago. Not to mention that it can take that much time to fill them.

At times we do not have that much luxury when we are on field. And for the same reason the skip logic feature of ProntoForms enables you to skip those fields in the form which go on getting irrelevant as you fed data previously.

Some of the main points where ProntoForms beats paper forms are –

And if you think we missed it out, yes ProntoForms does allow entry using the regular input controls such as textboxes, checkboxes, radio controls, etc.

You must have been living under a rock if you haven't heard about Dropbox and Google Drive. If however you have used one of them, you already know how they ease up your life. ProntoForms allows you to automatically upload your data in a readable format (if desired) to the likes of Dropbox and Google Drive. Hell, it even supports Evernote. In case given up your data to big organizations like Google or Dropbox, doesn't sound interesting, set up your own FTP server, and ProntoForms will be able to do justice to your data privacy.

As Steve Jobs said, before he moved to heaven, we are in the post PC era. For every single thing that you come across in day to day life, there must be an app for that. But how fast can you create apps for entering data that too randomly and while taking control of all the data? This is where ProntoForms comes in. With its management control panel which is available on the web and mobile app which brings all the features we talked about in the hands of field employees, ProntoForms is one app you should invest in if you deal with a lot of data input everyday as an organization. If however, you are an individual, this might be a costly deal for you. In short, ProntoForms is kind of an industrial revolution on mobile.

Read An overview of Data Encryption in today's digital world

Dragon Naturally Speaking Medical Software launched by Nuance is a speech recognition software used in medical transcription. It is desktop productivity software that is very powerful. This helps the medical fraternity to work more efficiently. This can produce memos, email, letters and reports as you speak. It can be taught to learn your voice in a matter of minutes. Doctors can dictate notes and the software converts it into reports.

Instead of using the keyboard and mouse, You can also work on the computer system which is provided by Microsoft speech recognition. This speech recognition tool provides recording of voice and well defined set of spoken commands. Therefore, through this article I will explain to you other features of Microsoft Speech recognition Tool in Windows 8.

This article is for the people who are new to Windows 8 and do not know what exactly Windows 8 is. I am giving a very high level overview of Windows 8 and how it fits in to the overall Windows OS series.