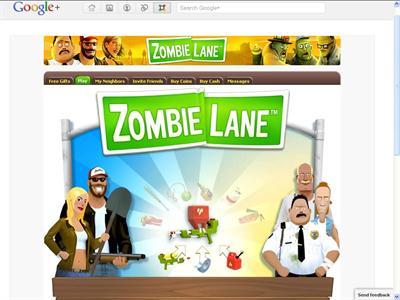 There are many games on Google plus like Facebook which involve building cities and farming. But none of them have Zombies roaming around nor many of them have shot guns and flaming boxing gloves are rare of be heard of. So when you play Zombie Lane you will get a feeling of a Déjà vu with a twist of goofy humor and scary yet funny characters. You don't only build your home from rubbles; you build the whole civilization back from the start, while keeping the Zombies away with a shovel :)

Zombie lane starts with a destroyed world, with everything around you reduce to rubble and the only standing structure a shack which was once your home. And yeah, the whole landscape is filled with hungry Zombies. To not get you confused in this strange world you have with you Rob the Rent-a-Cop to help guide which will guide you through the whole game. You start with a shovel, rebuild your home, reunite with your wife and kid and eventually restore your entire neighborhood to its former glory.

If you ignore the presence of the Zombies in your surroundings, the rest of the game is quite similar to FrontierVille. You have the same rebuilding of your surrounding from the debris lying around, grow crops which give your energy and the combat with Zombie is simply clicking on the Zombies. If a Zombie attacks and hits you then you are just stunned for a few moments and no other harm happens.

Zombie Lane has its own special twists which gives it a unique flavour from other games on Google plus. Combat experience improves with advancement in the game. The weaponry continuously goes on improving- from a shovel at the starting you will proceed to get different guns. You can also craft your own weapons with the items you get. For example pour some motor oil on boxing gloves and you get flaming boxing gloves. The improvement in the weapons comes in handy as the difficulty level of the Zombies also goes high and you will have to play harder to get rid of these advanced Zombies.

The whole game of Zombie Lane holds around the quest of structure building and completing tasks. You will have to grow certain number of crops, collect certain items and kill a fixed number of Zombies within a time period to complete a task. Some of these tasks are one time but there are some other which gives better rewards like being reunited with your wife and child. Though there is no fixed story base in the game of Zombie Lane but the quest system weaves a lose narrative around the game of building back your life.

Presence of Zombies might sound to you like this is a game with dark and grim background but in reality the presence of Zombies makes the game much more interesting to play and actually sets the game in a brighter mode. Most of the times you will be in combat with Zombies but the fight is actually not bloody violence but is actually slapstick comedy. The Zombies disappear immediately as soon as they are defeated and the animations and background is colourful and cheerful. The sound track too has a combination of horror with comedy.

The core game story might not be original but the Zombie addition gives it a unique presence. From building your home, to growing crops and fighting Zombies; the game is filled with pure fun and makes fighting the Zombie apocalypse fun and helps you learn why you should always keep a shovel handy!