Crime City lets you get your hands dirty when somebody needs a good breakdown! Crime City is you old mafia city where you take out your enemies with one at a time mugging.

Players start the game by common badman activities like standard muggings, asking protection money by making protection gangs, to killing lowly pricks in the business to protecting yourself or others from law by intimidating witnesses. Crime City is not like Mafia wars where you play passively and just clicking a button would take care of your enemies, NO! In Crime City you have the gun and you are responsible for pulling the trigger.

For example if you have to beat or kill a person then you need to walk to them, pull out the weapon and shoot/stab or hit them according to the weapon in your hand which might be a baseball, knife or a gun. There is no blood coming out of the injuries but the reactions are there. 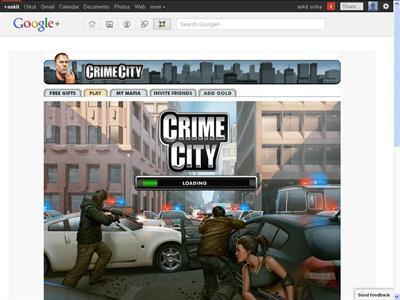 There are various zones in the map like Chinatown, Canal Street where you can do different type of jobs. A job can be done a number of times as the person you kill will be resurrected in a moment without any hint of anger or malice towards the person who just beat and killed him. Looks like no one in the city hates anybody else even for a moment.
Other than violence there is another aspect in the game and that is of city building. The players have their bases called "hoods" which acts as a base of operation for their business and can be populated with decorations like Shrubs and benches as well as investments like Steel making factories which will give construction material for development of the block. The area earns you money according to the development you do in the block.

Some jobs and missions require some level of respect. This respect can be earned by defeating your rivals in one to one combat and robbing their buildings.

Purchasing of some items require Diamonds in addition to money. Diamonds are eared by completing missions. Graphics of Crime City are average and not something very impressive. The load time is good and there is no lag in game playing.

Crime City will never bore you and keep you on your toes as long as you are playing because there is always something new happening here. It is not just clicking of a button and fighting. You have to look for a job in the first place and then go out to complete that job. Other than playing missions you can also go in your neighbourhood and take up a fight with your neighbor or spend time improving your neighbourhood by purchasing new items.

The biggest con/irritating thing about Crime City is that there are just too many limitations to completing a mission and purchasing a new item many times required not only cash but also Diamonds which are not that easy to gather considering that you get them after completing a whole mission.

Though I have made a comparison between Mafia Wars and Crime City there is not much similarity between the two and instead Crime City draws similarities more from Grand Auto Theft. With its innovative gameplay and inclusion of City Building and RPG in a mafia locality, Crime City stands out among other mafia and crime games.

Very good and detailed information shared in the article about the game 'Grand Auto theft Vice City brought to Crime City by Google Plus. Nice review of this came. What is the latest version of this game. Can we play this game on mobile device. What type of Mobile devices supports to play this game?

Hi Ramchandra,
You can't play this game on smartphones, it is too big for that. You should take a look at our articles on GTA 5 so know more about this game.