Swipe Telecom and MTV India has partnered once again to launch a new tablet called MTV Slate. It sports many useful features that include a huge 7.85 inch touch screen, Android 4.2.2 Jelly Bean OS, Voice calling and many more. Recently, the same companies together had released Volt and Slash phablets. Now, the latest one to join the Swipe's tablet series is MTV slate. In this article I am going to depict the full features, specifications, price and availability of Swipe MTV Slate tablet.

"We at Swipe Telecom take immense pride in offering affordable cutting edge technology to our customers. MTV Slate is yet another innovation as a result of an intense market research conducted across the country followed by a development phase and has been custom designed for the end consumers power packed with the latest features and astounding looks, MTV Slate will further strengthen our product portfolio for the youth."

Are you excited to know more about MTV Slate? If yes, then what are you waiting for? Let's discuss the specifications, features and price, below. 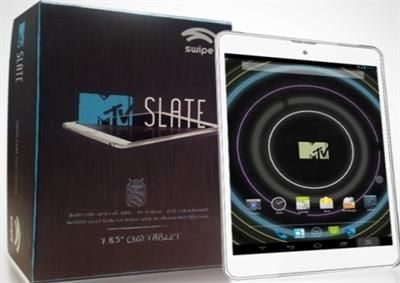 The Swipe MTV Slate sports a 7.85-inch HD IPS display with a resolution of 1024x768 pixels. The display type of this device is TFT and it supports 16M colors. With these features the tablet can give you very good viewing angles and vibrant contrast for your pictures. The form factor type of this tablet is bar. It comes with 197x124x11.3 mm dimensions and weighs 400 grams.

MTV Slate comes with 8 GB of internal storage. The microSD card slot in this device allows the memory to be expanded up to 32 GB. The 1 GB RAM of this tablet combined with the power of 1.2 GHz quad-core processor will offer crash free multitasking.

The MTV Slate boasts of dual camera features. We have a 5-megapixel camera at the rear in this device. Also, there is a VGA front-facing camera that aides its users in making Video calls.

The Swipe MTV Slate runs on Google's latest Android 4.2.2 (Jelly Bean)operating system. Under the hood, the device is equipped with a 1.2 GHz quad-core Cortex A7 processor. To indulge the users in messaging, MTV slate offers various options that include SMS, MMS, Email and more.

The tablet has an FM radio with recording, Audio and video playback for entertainment. The ringtones supported by this all new tablet of MTV are MP3 and Polyphonic.

MTV Slate is packed with a 3200 mAh battery of Li-Po type. It is expected to provide long lasting battery backup with this huge battery size. However, there is no official word on its talktime and standby time.

On the connectivity front, the MTV Slate tablet offer many features that include 3G, WiFi 802.11 b/g/n, Bluetooth 3.0, GPS and other. As the tablet is voice enabled, so you can make voice calls through the SIM inserted in the device. I would like to say that you can enjoy a lot with these connectivity options.

The MTV Slate is priced at Rs 14,999 and it would be available for pre-booking from on Swipe official website and various online shopping sites. To lure the buyers, as an introductory offer, the company is providing a free business cover worth Rs. 2500 to its buyers.

These are the specifications and features of this latest MTV Slate tablet. It comes with a decent 5MP camera, inbuilt 3G, a powerful quad-core processor and many more. As my personal verdict, the price device of this tablet is a bit more than the other tablets available in the market. So, I personally not recommend this device to buy. However, it's upon you to decide. Hope this information will help you in buying the new tablet.

One of the best cameras on this cool new tablet launched by swipe telecom. Really no complaints regarding the new range of tablets. They are really awesome

Loved the new look. Swipe Slate this is undoubtedly the thinnest Tablet with Quad core processor with 1Gb RAM and HD Display. Swipe Slate Tab is really cool in terms of looks & features. It has HD Display technology which is why it is so live & dazzling. Absolutely Fantastic…!!! Go for it worth it.

This tab shows great promise. Bearing in mind that the launch of all the Swipe Tab released proved to be a great success, this one too will not disappoint. Let's just keep our fingers crossed!

An impressive tab with all the features I would need. Plus elegantly built both in terms of looks & features. It's a very good device.