With the increasing interest in the online gaming, the game developers are now trying something new in every genre. A similar attempt in the solitaire has given birth to the sub-genre of pyramid in solitaire games. We have seen how games like Fairway Solitaire and Solitaire Blitz have not only achieved great success, but also generated huge popularity. Solitaire Tales is a new game on Facebook from the same genre.

The basic gaming is same and straightforward – the player has to click on the cards one number higher or lower than the card on the deck.

In the first level the player has to click on the cards to remove them from the board at the top of the screen. The objective is to remove all the key cards, the ones outlined with gold, from the board. As you move forward, new obstacles are added to make it difficult for you. For example card limits may be imposed and you will be able to progress further only after you've collected all the key cards. 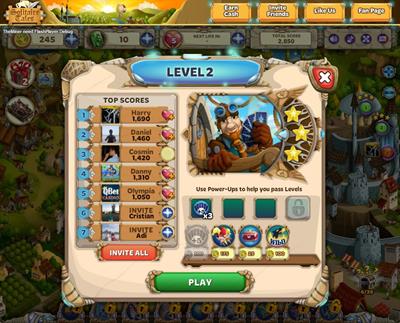 Since there is a random dealing of cards on each level, the chances of failing increase as you move up the level. Another annoying obstacle is cobwebs placed on few playing cards. The difficulty lies in removing them. The click removes the cobweb, but at the same time it removes the next card from the deck. Then there is another timed level. In it the player has to clear large columns of cards in a limited time frame. However, there is a timer line which adds more time to be given to the player as the cards above the line are cleared.

Each level rewards the player with stars, coins, and points after the successful completion. Like other games, these coins can be used to purchase power ups. The power ups include extra cards in the deck and extra Joker cards among many others. The stars will help you to unlock additional levels. Maximum three stars are given on any level and so the player should try to earn maximum no. of stars in order to unlock higher levels. Of course, if you are wealthy enough and a die-hard gaming fan, then you can purchase the power-ups as well once you run out of coins.

The game has got few negatives too. First of all Solitaire tales is too pushy when it comes to the social networking aspect. The game continuously asks you to invite your friends to play or to like the game page on Facebook. Also, many times due to the gaming, you will end up spamming your friends who are not into gaming.

This will be annoying for them too. Secondly, the gaming is easy and intriguing up to a level only. Post that it becomes too difficult and the only way to progress then is to spend some bucks on purchasing the power-ups. In this way this game also encourages monetization.

Overall Solitaire tales is a good game with an easy gameplay. However the funs lasts till a certain level only, and this makes it somewhat inferior when compared to other games in this genre.

This post is about a card game launched by Android named Marvel War of Heroes which is a 3D game and comes under the category of action. The post will you guide you with the steps to play the game and let you know all the features offered by this game.

Do you love to play Card games and want to enjoy some free card games? Then stop searching any more for such games! On Facebook you have some of the best Card games that you can enjoy without the need of even a penny. Read our list of top 5 best Facebook card games right now.

Level 507 is the last, are you guys gonna make more?