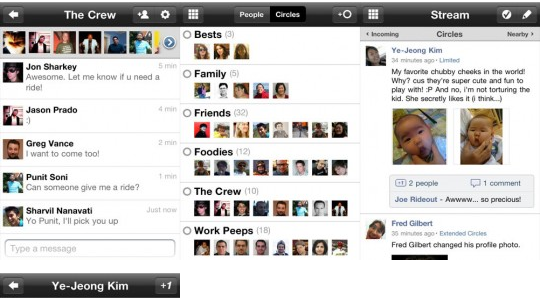 Advantages of Google+ app on mobile

Sharing on Google plus with your smartphone is too simple. Uploading images is just a click away from any Android and now Apple devices including iPad, iPhone and iTouch.
Huddle lets you send instant messages to the people in your Circles and Stream will keep you connected to your field of interest no matter where you are.

You can download the app for Google+ on your Apple device from the app store for free. For this you need to have a Google+ account.

Google+ app review, for iPhone only

Read How to make text bold, italic, strikethrough and underline in Google+

How Google+ affects SEO and your website's ranking?

Are you a webmaster looking for ways to promote your website through the newly arrived Google+ ? In this article I will discuss how Google+ affects SEO and how Google Plus influence the search engine ranking.

This article mentions the top five tips for users of Google+. Explore the features of Google+ with the help of this article and know how to use this latest offering of Google for your personal as well as business purposes

What are the reasons for Google+ traffic decline according to Experian Hitwise data?

This article throws some light on the reason why Google plus after getting huge number of members and consequent high hits is finally showing sign of fatigue in terms of reduced registrations and reduced average time on the site. Read on to know what Hitwise- who tracks website traffic says and what might be its future consequences for Google+

This article describes the use, features and function of the app integration and the other 3 features –ripples- a Stream highlighter, ripples and the photo editing app "The creative kit" that Google recently launched on Google plus.

Rel=Publisher meta tag: Syntax and Use