Alongside the launch of Google Nexus 7, Google has also launched a streaming device named Chromecast. It is a small equipment that plugs into the HDMI port of your television.

Chromecast streams videos directly from any iOS and Android device, Chrome OS devices like the Chromebook and other operating systems like the Windows with Chrome browser installed on them. Chromecast connects with these supported devices automatically leaving no task for the user. The user can continue to do his task while the content, audio or video streams from the source service like Netflix, YouTube or any other app. 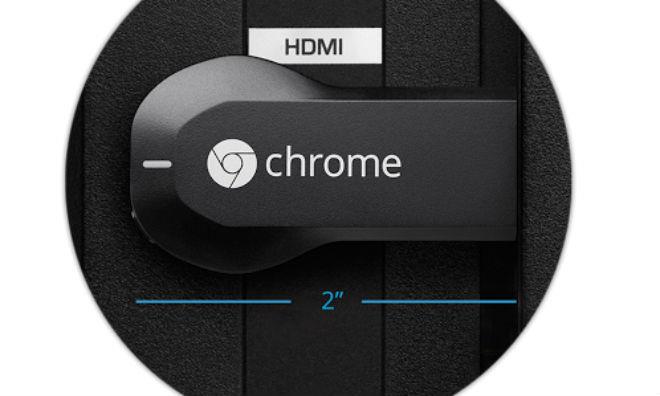 To allow the user to launch the media on the television, Google is now integrating updates into the iOS and Android apps like in Netflix, YouTube and Google Play Music which will equip them with a Cast button enabling the user one touch launch of their media on the Chromecast connected device.

Chromecast also supports queuing of the content with which a single or even multiple users can queue their content from a single or multiple Chromecast supported devices on the same television.

Chromecast offers you freedom from operating system dependence which comes with Apple TV Set-up box which only works with all Apple devices.

According to Google executives, Chromecast has a simplified Chrome OS which enabled easy integration with Chrome softwares. Google will also provide developers the tools to help them integrate Chromecast streaming ability into their apps. At the unveiling event, the executives showed the working on Chromecast with a Windows 8 laptop.

Though the device is wireless it does come with a cable to power it up. It is CEC compatible and supports video output up to 1080p. It is just 2-inches in length.

Right now Chromecast is already available on Amazon.com, BestBuy.com, and Google's online Play Store for a price of $35 which is one-third of Apple TV device. Chromecast has the ability to kill off the business of Apple TV completely if its offers stability of Apple TV set-up box.

Do you want to stream the content of your smartphone on to a television or through a projector wirelessly via Google Chromecast, Miracast or Apple's iOS Devices? If you want to play your favorite games on LED TV or watch a new movie from mobile phone on big screen, this article tells you different ways of connecting up wirelessly.

Chromecast is probably the most popular streaming device in the market. As it is based on the Android platform, it can make use of various streaming apps designed for Android. In this article, we take a look at some of the streaming Apps available for Chromecast.