After debuting on PS3 and Vita, Guacamelee is not at all ready to debut on PC and that too with nothing less than the Gold version which has both the original Guacemelee game and the two DLC packages. This platformer games has the same excitement to offer and is playable with the keyboard or a controller. It has taken care of a few bugs from back too but there are still some changes that we felt were necessary. Dive in for more.

Guacamelee: Gold Edition allows you to create custom skins for the game characters. Little technical knowledge is need to do this. Some enemies are so fun to eliminate that you would want for the session to last longer. We had a particularly good time fighting as Juan the undead luchador and to extend this fun we gave the play time a boost of around an hour using the The Devil's Playground DLC. We did not try it but in case you are more artistically inclined that us you should definitely try it out and share your creations with us.

Developers DrinkBox Studio have developed an amazing side scrolling platformer game. It probably won't be wrong to tag this game as their best ever creation and definitely tops in the overall Playstation and PC Network games. The offline game is definitely too short with the game playable in a single day which is disappointing but then it has an attractive gameplay which will keep pushing you to go for more.

Guacamelee is a action game played in the open world with you playing as Juan, a farmer who has not turned into a superhero wrestler. He is stupid and funny, yet adorable and attractive. The story begins with Juan murdered by Carlos Calaca, who is actually a evil skeleton. However, Juan is brought back from the death a gifted a magical luchadore mask which gives him kick-ass powers to take revenge for what happened to him and to save his love by defeating Carlos and his henchmen. The story is narrated in text form but is not much to focus on expect for some instances where you can get a good laugh out of them. 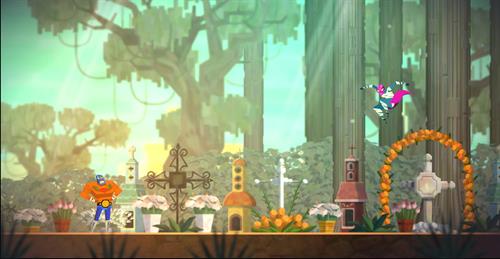 The graphics of Guacamelee! are old school but very beautiful and interactive. The characters are made keeping the modern anime in mind, the environment is expansive and open to explore and animations have that liquidity to them to take them as near to real scenes as possible. We were especially impressed with the flashy cutscenes that appeared as pop ups whenever we got a new power. These are small so don't interfere with your concentration on the game.

The two best features of this game are definitely its in-depth combat system and the vast open environment which you are encouraged to explore.

The combat system is so vast that as you master one of the combat weapons you are given with something new and each of them have their own multiple uses. The combat system might feel a little stiff in the start but that is just due to the fact that you need practise to master the controls of the game.

The environment is so vast that the game itself encourages you to back track and test you new powers. The game starts with just punches and kicks but soon as you proceed in the game new moves are added continuously like uppercut, ground-pound, grab, tossing enemies and combos. To force you to practise, the game cleverly has colored barriers protecting the enemies. You attacks too have a color and you have to use the same color attacks corresponding to the barriers to take them down. 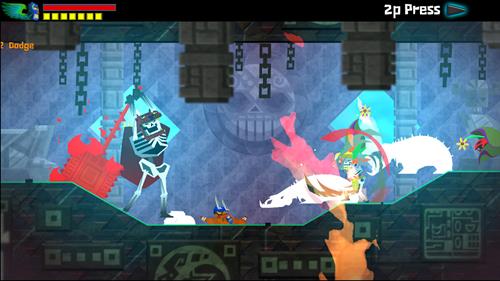 To achieve these new moves you need to collect boxes spread through out the game. There are basically 3 types of boxes- one contains coins that are to be used for buying new moves, another contains health and the third one contains a special meter that can make Juan more strong.

Guacamelee: Gold Edition is definitely a highly fun game to play. The gameplay and the interface is highly interactive and engrossing. The action part, that is the combat system has been given the most focus resulting game having a lot on offer for you. The only complaint I have with Guacamelee is that it is too short even with the addition of DLC. At most you will take only 8 hours to complete the game and that when you are completely clearing the map. With around 75% completion you can even complete the game in just 5 hours. I think this is a big compliment in itself for the game! So don't be in any doubt and just go ahead and buy this game to have the fun of 8 hours ;)